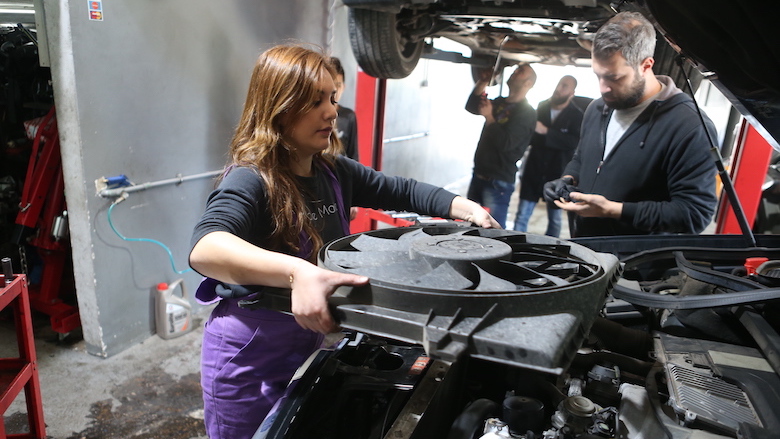 Progress toward gender equality is an economic imperative to improve and elevate women’s participation in the labor force. In Lebanon, women generally want to work so long as there is an enabling environment: one that considers the different challenges they face juggling job and caretaking responsibilities while also competing with men for leadership positions. In fact, only 4% of firms in Lebanon have a female manager. Supporting such an enabling environment for women has become a government priority, and for the first time in Lebanon a Parliamentary session dedicated to addressing gender-discriminatory laws is planned for March 2020.

Legal challenges that face women are many – ranging from lack of legislation combatting sexual harassment in public places and at work to discrimination in policies related to social security and protection, and inequities in pay for work of equal value, among many others. Equality gaps persist despite Articles 7 and 12 of the Lebanese Constitution which stipulate equality among all citizens. Furthermore, many gender related laws are pending in Parliament.

Compounding these legal challenges are societal expectations and norms surrounding traditional gender roles when it comes to household responsibilities, as well as preferences among both women and men for keeping child care within the family. For example, a country-level assessment on spousal involvement shows that 70% of husbands reported that the wife performed domestic chores and most working women are young, with highest percentage under 35 years, and never married. Therefore, building consensus to reform such laws becomes a challenge in a context where discriminatory laws that disadvantage women are reinforced by restrictive norms that are then perpetuated by the legal status quo. The cycle needs to be broken.

Supported by the Mashreq Gender Facility and working with other relevant government ministries and entities, the Ministry of State for Economic Empowerment of Women and Youth (EEWAY) is addressing this cycle with an approach that is rooted in creating an enabling environment, strengthening the evidence base and capacity, and ultimately increasing women’s access to economic opportunities. This is part of Lebanon’s commitment to improving women’s labor force participation as detailed in its Mashreq Gender Facility (MGF)-backed Lebanon Country Workplan. The workplan provides a roadmap of the activities to move the needle in improving women economic empowerment in Lebanon. In a collaborative fashion, EEWAY is advocating for the reform of gender-discriminatory legislation through alliances with Members of Parliament, concerned governmental entities (Ministry of Labor, Civil Service Council, National Commission of Lebanese Women, etc.), private sector organizations, CSOs (Lebanese League of Women in Business, Women Leaders Council, etc.), and academia (American University of Beirut/Olayan School of Business’ Knowledge is Power project and Lebanese American University Arab Institute for Women).

The March 2020 Parliamentary session and the preparation required in advance of the meeting responds to the country commitment under the MGF and is the first target milestone for building an enabling environment that aims to make it easier for women to access and participate in the world of work. Legal reforms alone are not sufficient. Under the MGF, a national multi-sectorial communications and outreach campaign will be carried out during the next few years to highlight the positive impact of women in the work force, addressing several sub-themes such as women as drivers of innovation and change, the contribution women can have on the country’s overall economic growth, family-friendly and flexible work policies, etc. In Lebanon, closing the gender gap in labor force participation by 25% can boost Lebanon’s GDP by 9%!

The immediate focus of the campaign will be on sexual harassment in the work-place that includes multimedia products, highlighted through social media outreach, on the need for such a law and the negative consequences of sexual harassment; grassroots outreach to engage youth at the university and municipal level to advocate for the law; and engaging companies in adopting codes of conduct with or without the legal framework. But this is just a start. Additional topics that will also be explored range from combatting gender-based violence (GBV) to positive messaging such as highlighting accomplishments of women role models, promoting positive attitudes of men and boys towards women's work and the importance of equal pay in private employment flexible hours, among others.