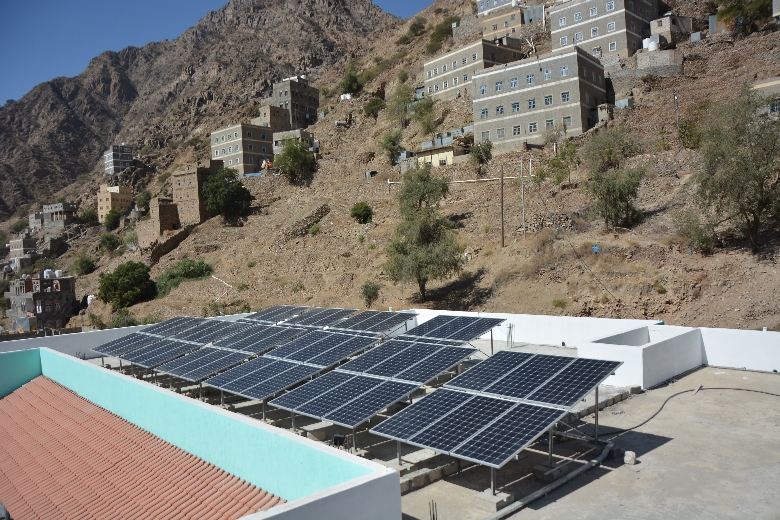 Public health services in Yemen have worsened significantly due to the conflict, which has been ongoing for five years. According to the UN, about half of health facilities in the country are non-functional or only partially functioning. One of the main reasons are long-lasting power outages that have become all too regular in the country since the star of the war. Over the past five difficult years, and due to outages in remote and rural communities in particular, Yemenis have been unable to access vital healthcare services to acceptable standards. Some health professionals reported that they sometimes have to work with candlelight. And economic hardship and lack of transport options caused by fuel shortages has prevented people from reaching the few functional clinics remaining to seek better health services.

Before the conflict, only around two thirds of Yemenis had access to public electricity grid (with around 12% who had access to private electricity networks), which was already one the lowest access rates across the MENA region. In 2017, two years after the onset of the war, this number had dropped to below 10%.

One solution presented itself to solve the energy crisis in Yemen: harnessing the abundant supply of sunlight. The World Bank Yemen Emergency Electricity Access Project began installing solar systems in hard-to-reach areas, in particular in schools and health facilities. The World Bank’s International Development Agency, in partnership with the United Nations Office for Project Services (UNOPS), is working with local providers with the objective to support hundreds of health facilities across Yemen.

As a result, millions of Yemenis will have access to reliable health facilities powered by solar energy, especially in rural areas. Clinics will be able to maintain the cold-chain necessary for immunization to help with access to essential vaccines, as well as other medicine and basic health services.

Poor and vulnerable women in remote areas are generally the least likely to receive adequate health care in Yemen, in particular for pregnancies. But the Yemen Emergency Electricity Access Project also helps ensure that health care workers can reach them.

The Al-Salam Hospital in the Lahj Governorate was one of these facilities that had to close after the start of the war. It recently received new solar installations and is now able to receive patients again. Before the intervention, the lack of electricity prevented medical staff from providing vital health services, in particular at night. In particular, the hospital could not admit patients for emergency and critical cases, child delivery, or obstructed labor cases. After receiving modern and efficient solar power systems, Al-Salam Hospital now operates 24 hours a day, seven days a week. It has also recently opened a special wing for child delivery and newborn care services.

Health workers in the Al-Salam hospital reported that they no longer see electricity as an issue. They are enthusiastic to see the women in their community being able to deliver their babies in much safer conditions.

Aminah Hassan, one of the women who directly benefitted from the World Bank’s solar project, explains what having a local clinic equipped with solar power means to her family: “I used to give my children homemade herbal recipes as medicine when they got sick because the health center in our village had to close years ago. We could not afford to take them to a private hospital. But now that the clinic is working again, I can go there whenever I need without having to travel a long distance to get the health services me and my family need.”

The World Bank and the Yemen Emergency Electricity Access Project is also installing solar energy systems in schools and other public facilities to provide reliable and affordable access to clean water, lighting, and other primary services in the communities affected by the ongoing humanitarian crisis. This solar power project aims at increasing resilience in rural areas, where around 70% of Yemen’s population lives and where electricity remains a major part of the current development crisis.