Maria Gladys Apolinar never expected to be running her own farm at her age.

The 73-year-old retired primary school teacher has turned an inherited patch of land from her late husband into a sustainable farming haven in the Meta department of Colombia’s Orinoquía region.

“I also never thought at my age I'd go back to school,” she says. After her husband passed away, Gladys says she felt a calling to make the most of the land he left her, and so in 2016, she signed up to participate in a Sustainable Cattle Ranching project that encourages sustainable farming in the Orinoquía region, specifically in Meta, but also covers four other eco-regions of Colombia.

Orinoquía is a 25-million hectare savanna and wetland area in the east of the country, bordering Venezuela. In recent years, large-scale land conversion has happened throughout the region to increase the production of livestock, palm oil, cacao, rubber, and rice.

What’s more, rainfall patterns are shifting, and extreme weather phenomena are becoming increasingly common across Latin America, putting agricultural production at risk. But an approach called silvopastoral farming, a method that brings together trees, forage plants and livestock, can help farmers adapt to the challenges of a changing climate. These systems can have a range of benefits that include healthier livestock, more nutrient-rich soils and fewer greenhouse gas emissions.

At a time when the need sustainable farming projects in the area has never been more urgent, the Colombian government, with the support of the World Bank’s BioCarbon Fund Initiative for Sustainable Forest Landscapes* (ISFL) will help to scale-up the activities promoted by the  Colombia Mainstreaming Sustainable Cattle Ranching (CMSCR) project across the Orinoquía region.

And there is perhaps no better example of the project’s success than Gladys’ seven-hectare farm, which has become a textbook example of silvopasture at work. She has developed a cocoa crop around the perimeter of her land that provides shade for her livestock of cattle, chickens and rabbits. She has planted hedges as a sort of ‘living fence’ around her pastures. And she is growing plants, such as the meadow buttercup, that provide a high protein supplement for her ten cows while they graze.

She rotates her livestock every three days to allow natural regeneration of the pasture, which creates richer forage and better fed and healthier cattle. And she has learned how to use manure from her livestock to produce organic fertilizer. “Nothing goes to waste here,” says Gladys. These practices are paying off - milk production has grown from around one liter per cow in 2016 to now seven liters per cow in 2019 thanks to this approach. 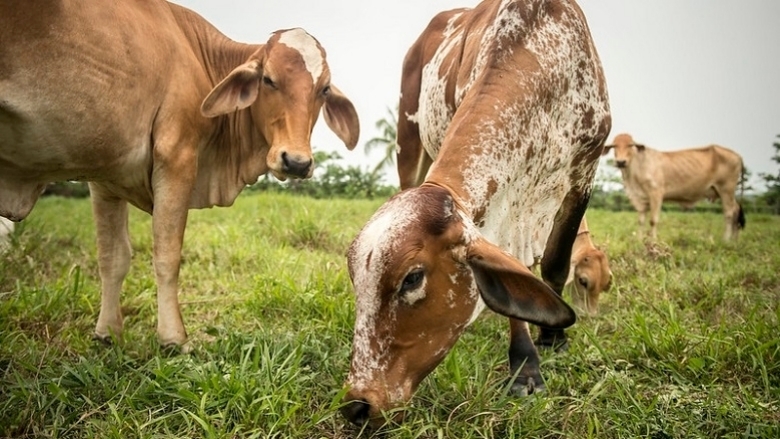 “Sustainable farming is offering new income opportunities for farmers and now we’re seeing many realize they can produce, and at the same time be part of conservation. We are very eager to test and implement the sustainable cattle ranching approach in other parts of the Orinoquía with different ecosystems such as flooded savannas,” says Luz Diaz, a Senior Agribusiness Specialist and the World Bank lead for the initiative. The CMSCR project is funded by the Global Environment Facility (GEF) and the UK government, and implemented through an alliance made up of the World Bank, the Colombian Livestock Federation (Fedegan), Center for Research on Sustainable Agriculture (CIPAV), the Colombian NGO Fondo-Accion and The Nature Conservancy.

“Visiting a farm like Gladys’ is very inspiring, and the World Bank is working to ensure that these kinds of farms become the norm across Orinoquía,” adds Diaz.

“Before my husband died, he said he didn’t want me to sell the land,” she says as her voice cracks. “I know I have fulfilled his wish to the utmost. I fulfilled my time as a teacher and now I will fulfill the rest of my life by doing this. I love everything about it.”