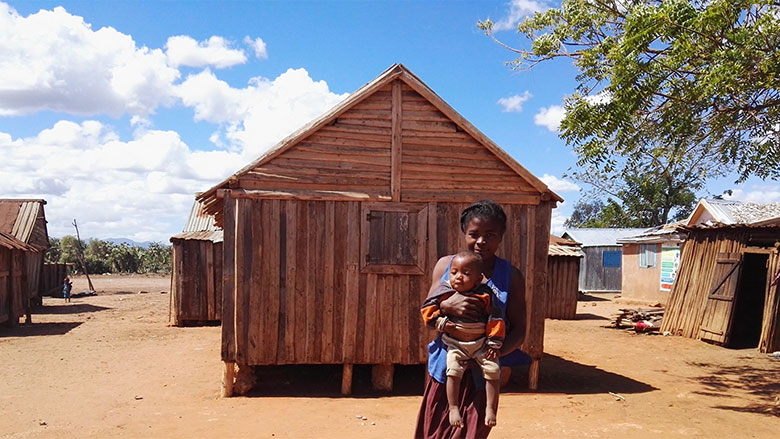 ANTANANARIVO, January 9, 2019— Anjaranomenjanahary Yvon Vesantine greets us at her doorstep with a smile.  A smile that had long disappeared from the face of this 27-year-old woman raising her two children alone since her divorce, erased by the years of poverty and suffering caused by the drought--or kere as it is known in the south of Madagascar. Between 2013 and 2015, most crops were lost, and more than one million people found themselves facing food insecurity. As an unemployed mother, Vesantine’s already precarious situation was compounded by the harsh climate and added to her feeling of exclusion. “During the years of famine, I had nothing to put on the table for my children to eat.”

Improving daily life for the most vulnerable

Vesantine is one of the 450,000 people receiving cash transfers disbursed by the government since 2016 to support the 39 communes most severely affected by the drought. Financed with a $35 million grant from the World Bank through the International Development Association (IDA), its fund for the poorest countries, this social protection program, Fiavota (which means “assistance” in the local dialect) combines cash transfers, nutrition services, and recovery funding. The goal? To alleviate three key drivers of poverty simultaneously: challenging living conditions, a lack of economic means and opportunities, as well as low human capital tied to food insecurity and the withdrawal of children from school.

Vesantine receives a monthly allowance of 30,000 ariary, equivalent to $10. “Thanks to this money, I can buy food and clothing for my children,” she explains. “It also makes me happy to feel like I am gradually being reintegrated into society, and now my children can go to school.” A source of pride for her. 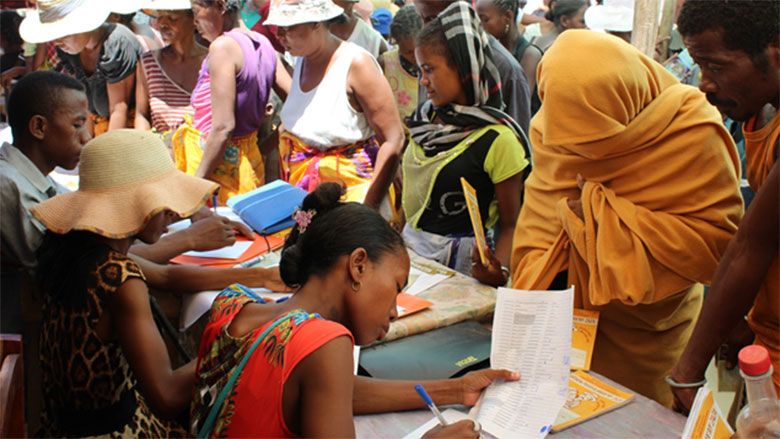 This financial boost has allowed beneficiary households in the Fiavota program to increase their average incomes, now 40% higher than the average incomes of non-beneficiary households. The  food and the nutrition workshops provided by the program have also introduced households to a more diversified diet, contributing to a reduction in the cases of acute childhood malnutrition and to enhanced food security. “Before, we only ate dried manioc. Now, we have rice, maize, and sometimes even chicken,” explained May Liavatae. For this 30-year-old mother of seven, health and education are synonymous with the family’s well-being and a brighter future. Therefore, with the cash transfer received from the Fiavota program, she decided to enroll her children in school. “Only school will be able to guarantee them a sound future,” she said. “I will spare no effort to help them achieve their dreams. The youngest wants to be a midwife,” she added, brimming with maternal pride.

And the numbers show that May is not the only one banking on their children’s education. Among Fiavota beneficiary households, the net primary enrollment rate increased 12 percentage points compared to non-beneficiary households, at the same time curbing the rate of early entry into the labor market of children aged 5 to 17 years.

"Only school will be able to ensure a sound future for my children. I will spare no effort to help them achieve their dreams. The youngest wants to be a midwife."
May Liavatae
Fiavota program beneficiary

Vesantine decided to use the recovery funds totaling 180,000 ariary ($53) to launch a business and chose to invest in goat farming, a type of animal rearing that generates profits in a short period of time. Her business has grown since then: “In the beginning, I had two goats. Today, I have six. For me, they represent a form of insurance against lean times, so that my children and I will never again experience the nightmare of the kere.” Vesantine has no intention of stopping there and is already looking to the future. She plans eventually to invest in cattle farming. “The important thing for me is to provide a steady income for my family and to become independent.”

Mid-term evaluations of the Fiavota program have indeed demonstrated that the cash transfers have fostered women’s empowerment and the creation of small family businesses such as Vesantine’s. In 2018, close to two thirds of beneficiary households had at least two small, family-run, income-generating activities, which are often headed by women. In the past, they were managed by the husbands with the help of their wives.

Impact assessments of the program have shown that the three objectives have been achieved. In particular, there has been an overall improvement in beneficiaries’ living conditions, accompanied by a decline of 5 percentage points in the severity of their food poverty, a development of economic activities, and an increase in children’s enrollment in school.

“The assessments prove that the Fiavota program beneficiary households are gradually lifting themselves out of extreme poverty after 15 months of implementation. They were able to benefit from the cash transfers and support measures provided by the program,” affirms Marie-Chantal Uwanyiligira, World Bank Country Manager for Madagascar. “Nevertheless, this recovery still needs to be strengthened because the Grand Sud region continues to be impacted by the cyclical effects of climate change.” 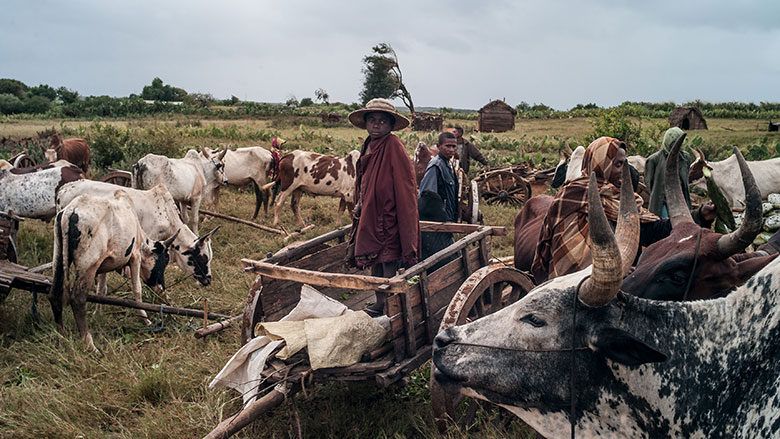 Many beneficiaries like Vesantine decided to use the recovery funds to launch a business and chose to invest in goat farming, a type of animal rearing that generates profits in a short period of time. Copyright: Dia Styvanley