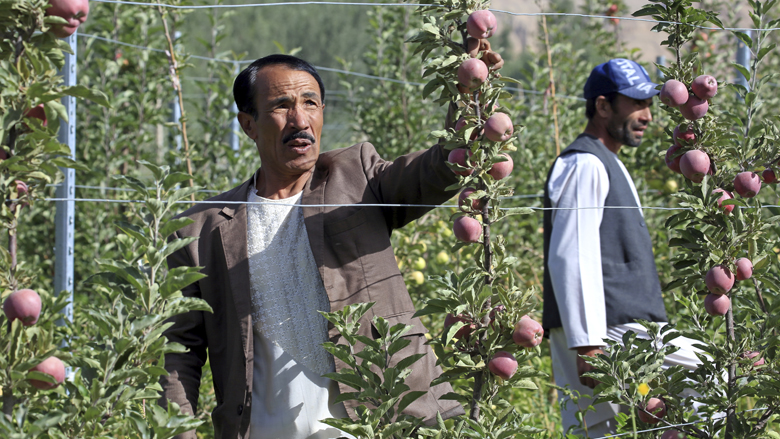 Amin is among thousands of Afghan farmers in Bamyan province who has learned new farming techniques and increased his annual income with the help from the ARTF-supported National Horticultural and Livestock Project.

BAMYAN CITY, Bamyan Province – On a neat patch of land enclosed by a chain-link fence just outside of Bamyan city center, Aminullah, 52, and his three employees are busy tending to his crops.

Although the farm in Sar Asyab village is just 2 jeribs (0.4 hectares), it keeps the four men busy because of its adoption of high-density planting. Amin grows a variety of flowering and root vegetables, such as cabbage, lettuce, cucumber, and white radish, between his 450 apple trees.

Today, Amin is teaching his workers how to spray the apple trees to protect them against disease, a technique he learned from National Horticulture and Livestock Project (NHLP) staff, who taught him the techniques of high-density planting as well provided the necessary medicine to spray the trees.

More importantly, high-density farming shows farmers without much land that they also can make a living from farming, contrary to the common belief that successful farming is land intensive.

Amin is among the thousands farmers in Bamyan Province benefiting from high-density farming with NHLP support. “The high-density orchards have been 100 per cent successful because it has good results,” says Amin, who adopted the new technique in 2015. His income has doubled from his previous income generated by cultivating apples alone. “Now I can profit from both the ‘upper and lower levels’ of my farmland,” Amin says. He expects to see a further rise in his income in the next two years. “It has been three years since I began high-density farming with NHLP help and in two more years, my [annual] income will quadruple to 250,000–300,000 afghanis (about $3,300–3,900)*,” he says.

NHLP staff provide constant guidance to farmers under the program. “NHLP staff is always available to offer advice on how to care for our plants,” says Amin. “They have also given us a book about plant diseases and farming techniques for high-density planting, such as how to irrigate multiple layers of plants, so that we have the information at hand.”

NHLP is implemented by the Ministry of Agriculture, Irrigation and Livestock (MAIL) and aims to increase productivity and production of horticultural products. It is supported by a $190 million grant from the Afghanistan Reconstruction Trust Fund (ARTF), administered by the World Bank on behalf of 34 donors.

In addition to high-density planting, NHLP has also introduced drip irrigation, disease resistant seeds, and modern disease and pest control methods to farmers across Afghanistan, which have helped strengthen their means of livelihood.

"In two more years, my annual income will quadruple” thanks to high-density farming. " 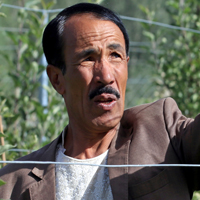 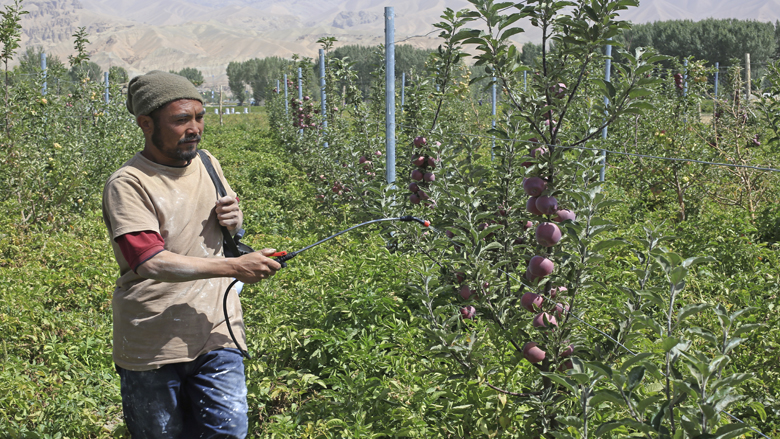 National Horticulture and Livestock Project (NHLP) implemented by Ministry of Agriculture, Irrigation and Livestock (MAIL) has established around 4,000 new high-density orchards in Bamyan Province, which not only grow fruits, but also a variety of vegetables.

NHLP started its activities in Bamyan Province in 2013. Mohammad Nabi Sirat, 36, NHLP provincial manager in Bamyan, believes that the crop diversification through high-density planting is the greatest NHLP achievement in the province. Greater diversification has stabilized local food prices and provided more sources of income as farmers are less reliant on a single crop, he says.

“Before the NHLP program started its work in Bamyan, local farmers produced only potatoes. This made the price of potatoes low and the price of other produce high in the local markets,” Nabi explains. “We have now established around 4,000 new high-density orchards in Bamyan Province, which not only grow fruits, but also a variety of vegetables. We supply them the seeds to do so.”

To increase interest in high-density farming in other parts of Afghanistan, Nabi is planning an exhibition for provincial government officials, businessmen, and the national media to show the high level of success of the high-density farms in Bamyan. The exhibition will also promote the high quality produce that Nabi believes will attract wholesalers from other provinces.