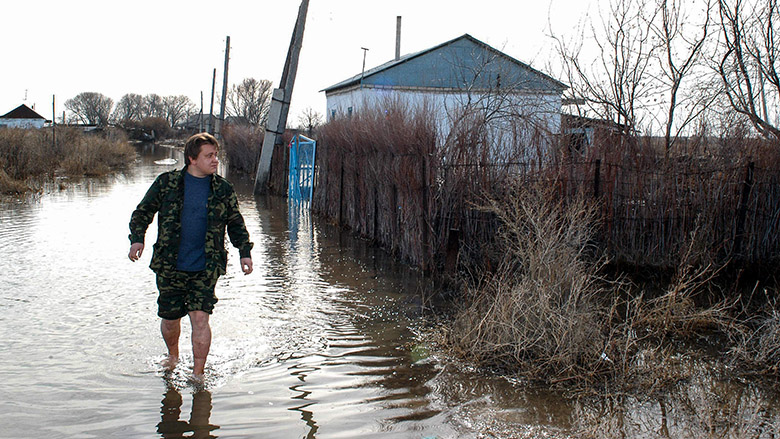 In Central Asia, a vast region that includes Kazakhstan, the Kyrgyz Republic, Tajikistan, Turkmenistan, and Uzbekistan, natural disasters can come in many forms – from persistent floods and droughts to rapid-onset events such as earthquakes, avalanches, and landslides.

Earthquakes, in particular, are a significant threat. The region has experienced major earthquakes that have almost destroyed some of its largest cities: Almaty in 1911, Ashgabat in 1948, and Tashkent in 1966.

Each year, earthquakes in Central Asia affect around 1.9 million people and cause more than $3.5 billion in economic losses. Floods in the region affect 950, 000 people every year and cause economic losses of about $4.7 billion. And if that was not bad enough, climate change is projected to amplify the risk of such extreme weather events.

For Central Asian governments, it is not surprising, therefore, that disaster resilience is a major priority. And, as such, they are developing national disaster risk reduction strategies. The Kyrgyz Republic, for example, has launched a new program that will rebuild public schools around the country to make them earthquake-proof.

In tandem with their country-specific efforts, countries are also increasingly focused on regional cooperation in disaster management – because natural disasters do not recognize borders. Indeed, the importance of addressing climate change and mitigating its consequences through regional cooperation was firmly acknowledged in a recent meeting of heads of states in Central Asia.

The Ferghana Valley is a clear example of the need for regional cooperation. The valley is densely populated and is spread across eastern Uzbekistan, southern Kyrgyzstan, and northern Tajikistan. It also features the Usoi dam on Lake Sarez in Tajikistan, whose waters reach as far as Uzbekistan, Turkmenistan, and Afghanistan.

If a natural disaster, such as an earthquake or flood, strikes in the Ferghana Valley, it could impact several countries at a time and affect millions of people. The cross-boundary nature of such a natural disaster clearly calls for stronger cross-border collaboration.

To support Central Asian countries in enhancing regional collaboration, the World Bank and its partners recently brought together scientists and government officials for the first scientific and technical council meeting on emergency situations and disaster risk reduction.

Following this meeting, a Regional Scientific and Technical Council for Emergency Situations was established, which comprises scientists and government officials working on a range of disaster-risk issues including natural disasters, hydrometeorology, and climate change in Central Asia. The main goal of the Council is to provide a platform for knowledge exchange and collaboration among national and international experts.

At the first Regional Council meeting on December 5-6, 2019, members shared their experiences in managing disaster risk issues and challenges in Central Asia, and also provided feedback on a forthcoming regional disaster risk assessment to be carried out by the World Bank. This assessment will help evaluate and quantify potential damages and losses from natural disasters for each country in Central Asia, and identify budget and investment gaps, with a view to minimizing the impacts.

“The Council can serve as a platform for the Central Asian countries to forge stronger regional collaboration and design regional approaches to tackle disaster risks in the region,” said Ko Takeuchi, Senior Disaster Risk Management Specialist at the World Bank.

The Regional Council aims to ensure its work will empower and promote regional cooperation and knowledge exchange across Central Asia.

“Every country in Central Asia has highly qualified experts in all types of emergency situations,” says Jafar Niyazov, from Tajikistan. “And they can make credible risk assessments for any threat that is common for the member-countries.”

The Regional Council is supported by the EU-funded Strengthening Financial Resilience and Accelerating Risk Reduction in Central Asia Program, which is managed by the World Bank and Global Facility for Disaster Reduction and Recovery, in close coordination with the Center of Emergency Situations and Disaster Risk Reduction based in Almaty.

“I hope that the platform will be further strengthened, and discussions deepen over the course of the Program implementation to stimulate the process for joint actions and initiatives in the area of disaster risk management,” said Gulnara Dussupova, Programme Officer, Delegation of the European Union to the Republic of Kazakhstan.