Infrastructure + education: A powerful duo to deal with flooding 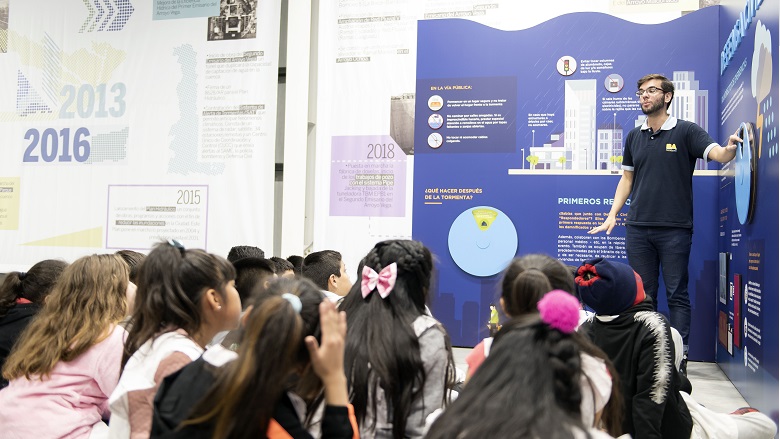 Floods are the most frequent natural disaster in Argentina. Building infrastructure can reduce their impact, but education also plays a key role.

The answer is that both are part of a comprehensive approach to improving flood prevention, mitigation, and management in the capital of Argentina.

Combining education and infrastructure expansion is helping to improve flood risk management in Buenos Aires and other cities in Latin America and the Caribbean that are facing rapid urbanization, adverse climate events, and governance challenges.

According to the World Bank, Latin America and the Caribbean had the highest number of floods between 1960 and 2017 after Southeast Asia. This natural disaster causes losses of more than $2 billion annually in the region.

Besides the enormous cost, floods put lives at risk and cause public health problems, and they also interrupt transportation, electric power, hospitals, schools, and other public services.

There is a sense of urgency behind the effort because climate change is expected to increase the frequency of flooding, and youngsters are seen as key in mitigating the impacts.

The initiative has given rise to the first group of teachers trained in flood resilience. It also has led to the development of free educational materials for students and teachers to use on their computers and cellphones to learn about flood resilience. More than 100 schools are using these interactive tools in Buenos Aires. Other schools, including outside of the city, are expected to join the effort in the coming months.

"Communication and training are just as important as building infrastructure. The World Bank is helping to develop a comprehensive response to flooding, and we are sharing these lessons with other cities around the world,” said Catalina Ramírez, Senior Water and Sanitation Specialist at the World Bank.

The dialogue among residents, experts, and government officials has led to the creation of a warning system and has enhanced projects to ensure a better future for the city.

This can be seen with the creation of the Experiential Learning Center for the Hydraulic Plan, which  provides residents with information and training on the impact and problems associated with flooding. In a little over three months, more than 1,400 people between the ages of six and 18 have visited the center to learn more about the city and its natural environment, the impacts of urban development, and the role each person can play in preventing floods and mitigating climate change.

The Experiential Learning Center also provides a space for visitors to share their ideas on the future of the city. Some of the comments written on the walls of the center are: “Improve the coastline,” “Be in closer contact with the water,” and “Have more green spaces.”

“The implementation of participatory workshops using different age-appropriate, co-creative methodologies has enabled us to confirm citizens’ strong desire to enjoy their water resources and those of the natural ecosystems associated with them,” said Mariano Jordan Kristoff, social expert of the Hydraulic Plan of Buenos Aires.

These initiatives can serve as a model for other Latin American and Caribbean cities to improve water risk management and the integral protection of the population.