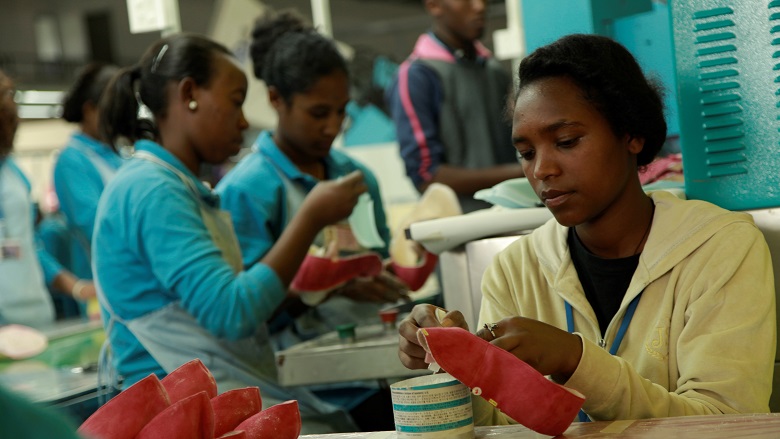 WASHINGTON, November 13, 2019—Ethiopia is one of the fastest growing countries in the world. Its current population of over 100 million is expected to double in the next 30 years, hitting 210 million by 2060.  Due to this accelerated surge in population growth, the country is facing a critical challenge of creating enough jobs.

The Ethiopian government identified industrialization as the means to transform the economy, reduce poverty, provide jobs, and achieve the ambitious aim of transitioning the economy to lower-middle-income status by 2025. But growth in the manufacturing sector lags.

The country looked to a new model to promote growth and create jobs. Given the importance of small and medium enterprises (SMEs) to the Ethiopian economy, the government started focusing on private sector growth and support for SME competitiveness, to help facilitate the creation of three million jobs each year.

Burayu Development PLC is a small sized firm based in Addis Ababa that has been providing boxing and labeling services to businesses in and around the capital city since 2012.  The expansion of industrial parks (IPs) offered Burayu an opportunity to grow and further develop its business. However, the company quickly realized that it did not have the capacity to meet the demands of the firms within these IPs.

That all changed in September 2017 when Burayu’s system was upgraded to meet the demands of buyers as one of the beneficiaries of the World Bank-funded Ethiopia Competitiveness and Job Creation project (CJC). The project aims to attract investments and improve the competitiveness of companies in select industrial parks (IPs)—Bole Lemi I & II and Kilinto in Ethiopia.

SMEs in Ethiopia are significantly underserved and in 2012/3 received only 7 percent of the overall lending portfolio in the financial sector, among the lowest shares in Sub-Saharan Africa. The CJC project set up a matching grant fund to alleviate these constraints and with the project covering half the cost of a new packaging machine and the recruitment of experts, Burayu was able to meet demands and supply its products to firms in Bole Lemi, Hawasa, and Mekelle Industrial Parks. This resulted in more than $97,000 in additional sales as well as creating many new job opportunities for members of neighboring communities.

Without the project’s support, explains Mr Bekele Andargie, the general manager of Burayu Development PLC, the company would have found it difficult to buy the equipment and hire more people or expand the business into other IPs.

The CJC project started in 2014 to support Ethiopia’s industrialization efforts and help create more jobs. The project has been supported and complemented by the World Bank’s multi-donor partnership, the Competitiveness Industries and Innovation Program (CIIP). CIIP-funded activities complementing the CJC project have been supporting the attraction of the private investment in the IPs; contributing to the government’s industrialization agenda by strengthening the legal, policy, and institutional framework of IPs; facilitating stronger links between the IPs and the local economy; and enhancing domestic SME growth which is critical for job creation. CIIP-funded activities helped improve the quality of the IP infrastructure and governance, leading to increased investor interest and the facilitation of over $101 million in sales in the Bole Lemi I.

The CIIP and CJC project’s Business to Business (B2B) Linkages program supported local suppliers such as Burayu Development by providing funding for machinery upgrades and technical assistance. It also helped create connections with foreign direct investment firms in the IPs. As a result, the beneficiaries of the B2B Linkages program generated over $390,000 in additional sales to the IPs ; benefitting Ethiopian communities and its growing SME sector.

Kilinto and Bole Lemi-II completed construction activities in the summer of 2019, which included providing quality industrial infrastructure for manufacturing in strategic sectors such as garment, textiles, and pharmaceuticals. With technical assistance support from CJC and CIIP, the government is also in the process of awarding contracts to foreign investors and the full operationalization of the parks is expected in 2020. The two new IPs have already attracted $55 million of private investment. In November 2019, one of the new tenants in the Bole Lemi II IP – Soufflet Malt Ethiopia, a subsidiary of French company Groupe Soufflet –secured a $20 million investment from IFC.

When these two IPs become operational, activities linked to them are expected to create an additional 46,000 jobs, of which 64% will be for women, and the total sale of goods and services linked to the two parks is targeted at $100 million before the CJC project closes in June 2021.

Ethiopia has some of the lowest gender equality performance indicators in Sub-Saharan Africa. The investors also face significant challenges in worker’s turnover and productivity. This is why, in addition to supporting overall job creation, CIIP and the CJC project focuses on closing the employment gender gap, and improving productivity and retentions by introducing soft skills and technical skills trainings.

Yodit is a young woman from Ambo, which is located about 150 km from Addis. She worked in a private apparel factory in Addis but she didn’t have the skills necessary to move forward in her career path. Feeling stuck and in need of resources to develop her skills, Yodit became one of many candidates who benefitted from the project-funded training program, and was hired by a tenant company at Bole Lemi IP. The training program provides flexible demand-driven technical skills development to meet evolving investor needs, which is complemented with soft skills training. Within about two years, Yodit advanced in her career. She went from being the junior factory sewing worker to the acting factory line representative and then to an office job where she does data recording.

Through funding related activities 16,588 jobs were created in project-related IPs, of which, 89% or 14,730 went to women.  The program also provided basic technical and soft skills training to over 2,700 new recruits, primarily hired by the factories operating in Bole Lemi-I IP, of which 80% were female, and trained over 100 trainers. Like Yodit, these beneficiaries demonstrate the value of investments in training and skills development to advance progress on jobs, careers and SME performance in emerging economies.

“I feel so proud of myself because I didn’t expect to gain such knowledge via the training, said Yodit. It opened choices to multiple sections like sewing, ironing, packaging and office jobs and to be exposed to new things in my life.”  The best part about all of this, Yodit says, is how she has managed her time to continue her college program. She is expected to graduate this year with a degree in accounting.