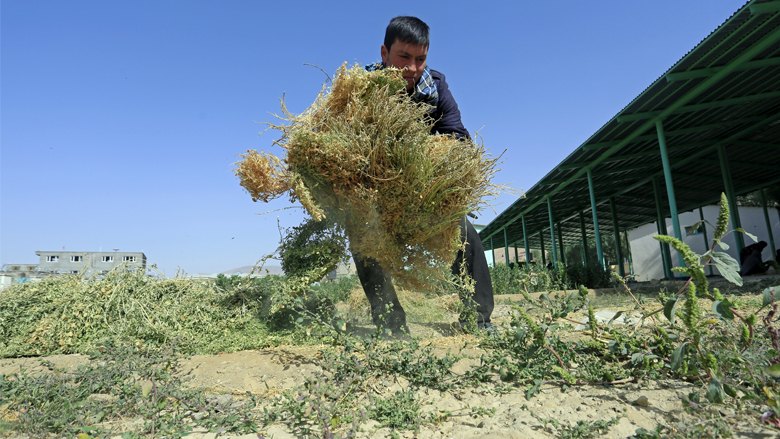 Production of seeds adopted to local climate by Mullah Ghulam Research Farm has helped farmers in Bamyan and neighboring provinces to triple their farmlands’ output.

Mullah Ghulam Research Farm has operated for seven years. Its research on soybeans and potatoes has been its crowning achievement, according to Qurban Omid, 33, the farm’s grain research director.

“Without research,” Omid says, “we cannot introduce good seeds to farmers and we want the farmers to have good products.” The work on soybeans, potatoes, and wheat at the Mullah Ghulam Research Farm is vital. The

Sarwar explains the importance of this breakthrough for local farmers. Until now, the majority of farmers in Bamyan and neighboring Daikundi province had used seeds that were developed by research farms in other regions, which were not compatible with the central highland climate and conditions.

“These seeds were not successful,” he says. The seeds resulted in poor harvests and a high risk of disease. “The main goal is to develop improved seeds for farmers to increase production and reduce the risk of disease infection,” says Sarwar of their work at Mullah Ghulam Research Farm.

"Without research, we cannot introduce good seeds to farmers and we want the farmers to have good products." 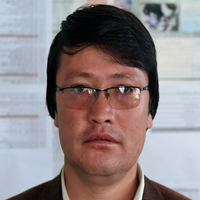 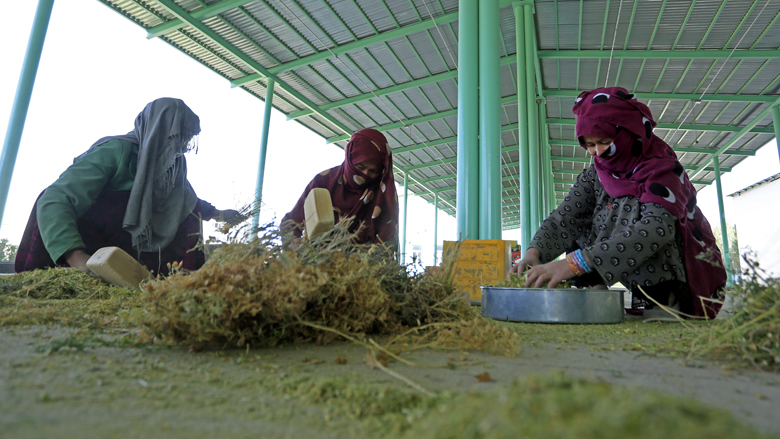 Mullah Ghulam Research Farm is one of 11 regional research farms across the country aiming to increase adoption of improved crop production by local farmers.

In 2015, the Ministry of Agriculture, Irrigation and Livestock (MAIL) divided the country into different climate zones to produce seeds specific to each zone. “This approach highly increases the compatibility of seeds with their host climate,” Sarwar says. “If you observe the farms along the road to Daikundi, the [new] improved seeds have been very effective for the farmers.”

Mullah Ghulam Research Farm is one of 11 regional research farms across the country supported by the Afghanistan Agricultural Inputs Project (AAIP), implemented by MAIL. The projects aim was to increase adoption of improved crop production technologies in the agricultural sector.

Closed in June 2019, AAIP was providing technical support to MAIL staff to improve the effectiveness and efficiency of research farms, like Mullah Ghulam Research Farm, through capacity building as well as infrastructural upgrades. It is supported by the Afghanistan Reconstruction Trust Fund (ARTF), administered by the World Bank on behalf of 34 donors.

The breakthrough on potatoes at Mullah Ghulam Research Farm yielded a disease resistant variety that has boosted output. “We have introduced a modified disease resistant potato to local farmers,” Grain Research Director Omid says. “Previously, farmers could harvest 3,500 kg of potatoes from 2,000 m2 of land. With the new modification, they have been able to harvest 7,000 kg from 2,000 m2.” As a result, farmers in Bamyan have adopted the potato as a new crop faster than any other crop, according to Omid.

Haji Safar Ali Danish, 55, a local farmer, confirms that the modified disease resistant potato variety has helped increase his harvest, “Before, we harvested 3,500 kg of potatoes [from 2,000 m2]”, he says, “now we can harvest about 5,600 kg.”

Another critical component in AAIP is to strengthen the technical and economic efficiency of the value chain of certified wheat seeds. As Omid walks through a small plot of wheat plucking a few specimens to examine, he takes his time rolling each grain in his hand, separating the husk from the grain.

Soon it will be time to harvest and one of Omid’s responsibilities is to examine the wheat and oat plants to evaluate the success of the modified seed or new farming method being tested. The varieties that perform well against a set of indicators will be sent to another facility for mass production before being distributed to local farmers in Bamyan province. 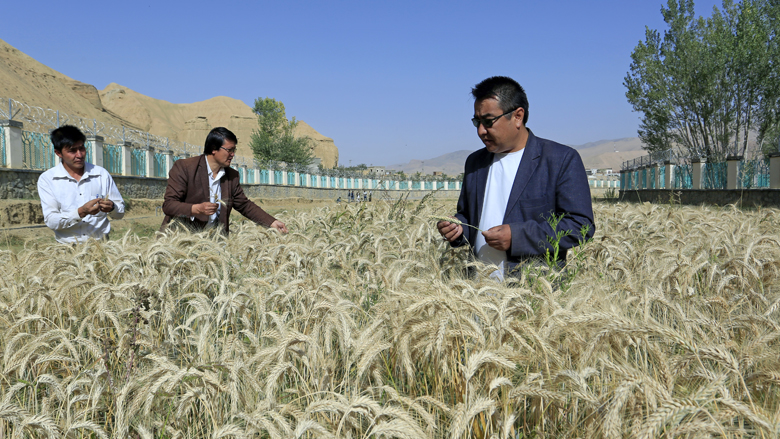 Research on wheat is continuing to address the diseases that local farmers complain are infecting their wheat. Due to the spread of disease, many farmers are harvesting just 140 kg of wheat from 7 kg of wheat seeds, Omid says. “But we are trying to improve those results to 420 kg of wheat with enhanced seeds.”

Farmers are also advised to cultivate their farms in October rather than November and December, because early cultivation will boost their harvest.

Mohammad Hussain Abalak, 61, a local farmer, says he is grateful AAIP introduced him to new farming methods and the improved seeds, which have helped him triple his output on his 4,000 m2 farm. “We could only harvest 160 kg of wheat on our land before, but now our harvest is 480 kg of wheat,” he says.