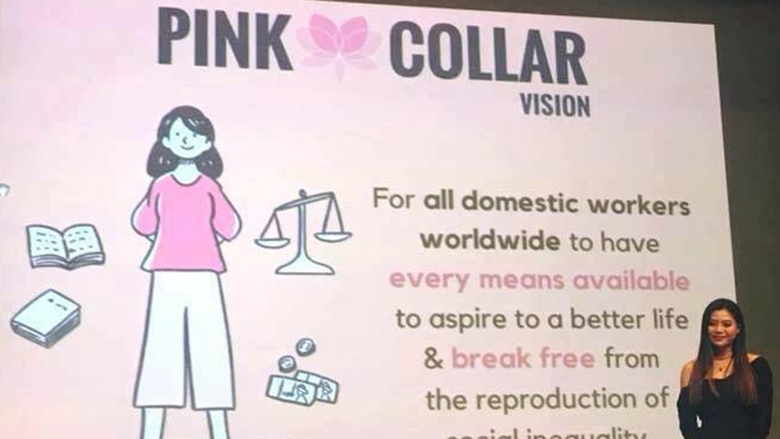 Law at the World Bank Youth Summit in 2017 where she won the Audience Award for her pitch on Pinkcollar, a social enterprise aimed using technology to helping domestic workers gain safer and better access to work. (Photo Credit: Zenna Law)

Zenna Law has fond memories of being raised by domestic workers for the majority of her life who became integral members of her own family. Growing up, she began to learn about the hardships that foreign domestic workers face - but it wasn’t until Law volunteered at a social organization in Moscow that she was truly exposed to the difficult situations domestic workers lived in. Since then, it has become her mission to help the domestic workers by bringing them into the formal economy.

With the help of Elaine Sim, 26, and Sophia Aliza Jamal, 26, Law has founded Pinkcollar - a tech_enabled recruitment agency which is a shared economy platform operating online for migrant domestic workers in Malaysia. Employing ethical sourcing and hiring practices, Pinkcollar’s mission is to end the forced labor and trafficking of domestic workers.

The issue is no easy one to tackle. Middlemen recruitment agencies have been criticized for making domestic workers sign contracts they have difficulty understanding, forcing workers into debt bondage by charging illegal recruitment fees, deducting workers’ salaries, restricting freedom of movement, and failing to provide knowledge on legal rights. According to Law, this leaves the over 250,000 migrant domestic workers registered in Malaysia at risk of exploitative working and living conditions, including abuse.

Law relates some of the stories she has heard from domestic workers she now works with. “They told us about how their belongings were confiscated, including their families’ information to prevent workers from contacting them. Body checks were also performed on them without their permission, among other things.”

“As an ethical agency, we aim to address these issues by targeting domestic workers seeking safe and dignified jobs, and employers looking for a better way to hire. We want to fix Malaysia’s domestic work sector through a recruitment service that promises responsible matching, transparency, and community support for both workers and employers,” Law said.

Leveraging on technology and the Internet, Pinkcollar has successfully digitalized a conventional method of hiring domestic workers via middlemen agencies, by utilizing social media to source workers directly – thus eliminating the need to engage recruitment brokers and giving worker community groups open channels for support, resources and direct reporting of grievances. Rigorous vetting of worker-candidates and employers using technology are also conducted to match them to domestic workers.

“We have plans to expand on our tech capacities in ways that progress our mission, while remaining conscious that our company’s core lies in the humane care and treatment of people — employers and workers alike,” Law said.

Such innovation has the power to be disruptive and transformative, potentially wielding impacts towards the Sustainable Development Goals, like promoting greater gender equality in work and reducing inequalities and caste-based discrimination. 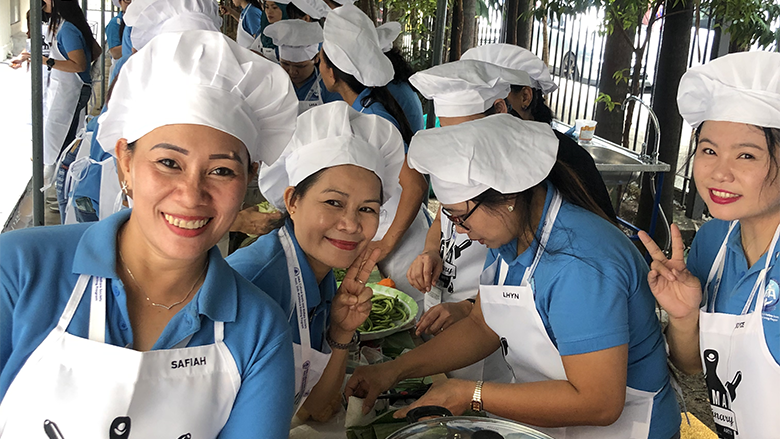 “With every domestic worker supporting an average of 5 dependents back home, our social impact is measured by the amount of debt savings accumulated from the zero-placement-fee policy for our workers. This safeguards their abilities to support their families without any recruitment debt. We are also paving the way forward for domestic workers post-placement, by building partnerships with organizations to provide access to upskilling and education on their rest days. Creating avenues of continued learning will increase their chances of accessing better job prospects and better livelihood planning” Law added.

In 2017, Law brought Pinkcollar to the World Bank Youth Summit where she presented on the company and its goals. That year, Pinkcollar took home the prize for the Audience Award. In early 2019, they were awarded a Young Southeast Asian Leaders’ Initiative (YSEALI) grant to continue their progress for domestic worker welfare. Today, PinkCollar is up and running and seeking to grow their social enterprise further.

“There is immense value in the contributions of domestic workers. Over the past year, I observed my family’s domestic worker tending tirelessly and lovingly to my ailing grandmother as her primary caregiver. It struck me to realize just how deep and far-reaching the positive impacts of their work have always been. They work within Malaysian homes to fill the gaps — often taking on the role of mothers, cooks, caregivers and household managers — and devote themselves to supporting our families, away from their own. We need to start building a better ecosystem for domestic workers that will enable them to also follow through with their own hopes and dreams for their families and futures.”

In celebration of International Youth Day, there is much to be said on the role of the youth in creating the change they want to see, based off the issues they experience. For Law and her friends, using online platforms to create better and safer job opportunities for domestic workers represents a new and disruptive approach to a longstanding issue. As technology continues to change the world, utilizing it to create social impact is key – and the youth are at the helm of these new developments.