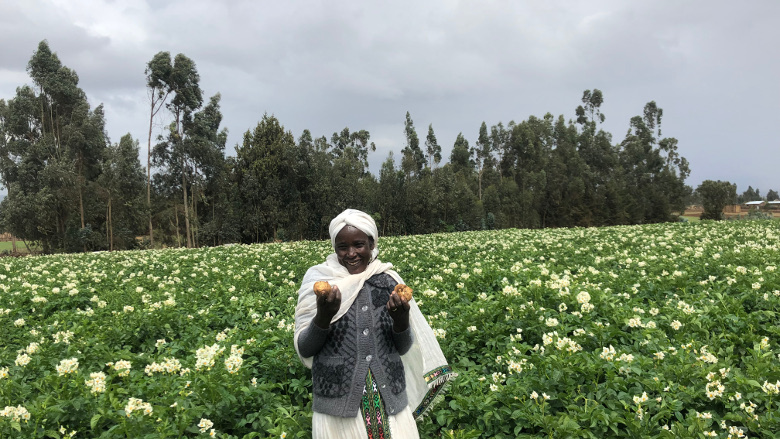 Potato farmer Askale has been able to increase her yield and support her family, with support from the Agriculture Growth Project. ©Vikas Choudhary/World Bank

ADDIS ABABA, August 12, 2019 – Askale is a farmer in Arsi Zone in Ethiopia’s Oromia Region. Although she worked tirelessly on her 0.5-hectare land after her husband passed away, she was only getting 25-30 quintals of potatoes. It was barely enough for her to make a living and feed her children.

That all changed four years ago when her village’s irrigation system was upgraded, and she became a beneficiary of the World Bank-funded Second Agricultural Growth Project (AGPII), which offers support, advice and training on the best agricultural practices from development agents. With a stable water supply and access to improved potato varieties and fertilizer, Askale has been able to increase her yield, harvesting as much as 120 quintals of potatoes on the same hectare of land. She sold 100 quintals and kept the rest for her family’s consumption.

AGPII, a flagship project of the Ministry of Agriculture, builds on the success of the first Agricultural Growth Program, which ended in July 2017. The project helped boost the development potential of Ethiopia’s agriculture industry, which accounts for 35% of the country’s total output and nearly 70% of the nation’s labor force. It is also a major contributor to export earnings.

“If it wasn’t for AGP, I would not have been able to get married,” said a visibly excited Abu Aberra with a beaming smile. For a long time, Abu was an unemployed young man without any means of income. After inheriting 0.25 ha of land, he became a farmer and took part in AGP and joined the water user association. Today, he has expanded his plot by renting an additional 1.25 hectares and cultivates potatoes. By using all the support offered under AGP, he was not only able to become a successful farmer but a respected member of the community and an eligible bachelor.

“AGP has changed my life,” he said. “Previously, I had nothing. Now I have a family, a nice house with a corrugated sheet and a motorcycle,” he said proudly.

AGPII is also promoting the development of climate-resilient agriculture, including the introduction of irrigation and climate-resilient crop species which has been a crucial in building the resilience of farmers living in drought prone areas. In Koko Ashabeka, where both Askale and Abu live, the project has helped to upgrade small scale irrigation. Although the farmers’ cooperative used its own resources to build an earthen canal to divert the water from a small river, it was barely able to irrigate 15 ha of land. AGPII provided additional financing and developed 500 meters of lined irrigation canal to get the water to farmers field. As a result, the farmers were able to increase their irrigated agriculture field from 15 ha previously to 52 ha.

Energized by the injection of funds and hope, the water user association—which included Askale and Abu—collected contributions from the members and constructed an additional 300 meters of lined irrigation canal. With improved variety, extension advise, and appropriate input, member farmers were able to increase their yield from 70-80 quintal per ha to 250-350 quintal per ha.

“We are currently discussing with Senselet, a potato chip manufacturer in Addis Ababa, who wants to buy directly from us and we hope to get a much better price for our potato,” Askale said.

Askale and Abu’s stories are not unique. The integrated agricultural development approach established by the project combines improved agricultural extension service delivery, investment in small scale irrigation, bringing in research to field and ensuring market linkages, is bringing similar benefits to millions of farmers across Ethiopia.

AGPII is implemented in 157 woredas (districts) in Amhara, Oromia, SNNPR, Tigray, Benishangul-Gumuz, Gambella and Harari regional states, as well as Dire Dawa city. Nearly 1.3 million smallholder Ethiopian farmers are benefitting from AGPII, including Askale and Abu, who live in areas with the highest potential for agricultural growth.