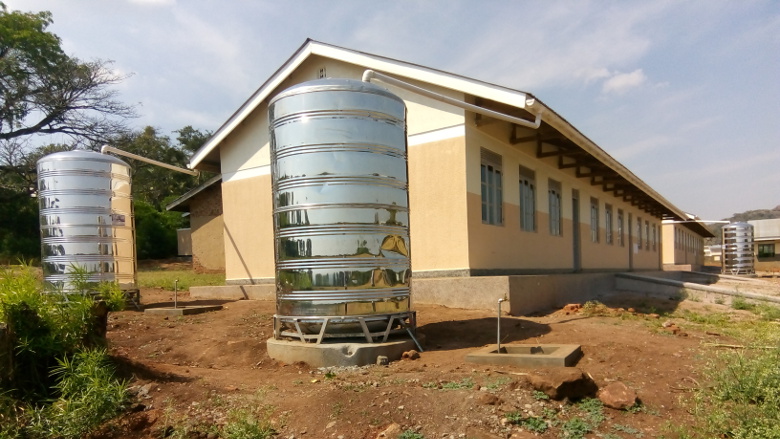 New classrooms with upgrades such as rainwater harvesting tanks, better lighting, and drainable latrines—enough for boys, girls, and teachers—will go a long way toward easing overcrowding and improving learning at the Lobule primary school in Koboko in northwestern Uganda. © World Bank

KAMPALA, August 2, 2019 – Edith Kwarisima lives in Kyarugaju, a poor village near the Nakivale Refugee Settlement Camp in the Isingiro district of southern Uganda. Refugees have been coming to this camp since the 1960s, and 52-year-old Kwarisima has grown up around them.

She and other residents of Kyarugaju have seen the benefits that refugees bring to their community over the years, through increased demand for goods and services, employment creation and income spillover. But as conflicts in nearby countries cause the numbers of refugees continue to grow since 2016, their presence has increasingly strained social services, the environment, and the coping abilities of local host communities such as Kyarugaju. This leaves many residents such as Kwarisima frustrated. “The refugees have good health facilities within an easily accessible distance and have drugs and water all the time. We don’t have such privileges,” Kwarisima explained. “Getting health services here is a nightmare. You can’t even make a phone call during an emergency because we don’t have network.”

With a refugee population of 1.4 million, Uganda is the biggest refugee hosting nation in Africa and third in the world. Its refugee policy is considered one of the most progressive and generous in the world, providing free healthcare and education in refugee settlements and permitting refugees to move and work freely. Refugees are allocated plots of land to settle and farm, which has enabled more self-reliance and integration into local communities.

Scaling up support for all

To accommodate the growing number of refugees and support host communities, the Government of Uganda is working to improve service delivery, expand economic opportunities, upgrade municipal infrastructure, and improve access to water, health, and education in refugee hosting districts. In 2018, the World Bank allocated additional financing of $283 million through the International Development Association’s (IDA) regional sub-window for refugees and host communities to help scale up support to projects already underway in the country. The sub-window is financed through the IDA18 replenishment, the largest in IDA’s 56-year history.

Uganda has since accessed financing under the IDA sub-window for three operations: $50 million for the Support to Municipal Infrastructure Development Program to improve physical planning, land tenure security, and small-scale infrastructure; $58 million for the Integrated Water Management and Development Project to improve access to water and sanitation services for several rural and urban refugee hosting communities across Uganda; and $150 million for the Development Response to Displacement Impacts Project (DRDIP) in the Horn of Africa to boost ongoing efforts to improve access to basic social services and expand economic opportunities.

“Uganda’s progressive policy environment for refugees provides some of the best prospects for self-reliance in the world,” said Tony Thompson, World Bank Country Manager for Uganda. “We are working very closely with other development and humanitarian partners to support the Government and the people of Uganda, including intergrating issues concerning refugees and host communities in the national and sub-national development planning frameworks to ensure resiliency and sustainability.”

In January 2019, the World Bank agreed to further extend the IDA sub-window to countries that experience a massive inflow of refugees, and Uganda became eligible to access an additional $217 million in grant funding. This brings the total allocation sub-window allocation to $500 million for refugees and host communities.

DRDIP in Uganda is working to protect the interests of host communities in 11 districts. Construction of 83 infrastructure projects is ongoing across all 11 districts. These include classroom blocks that will be outfitted with modern furniture, teachers’ houses, health centers, public latrines, and water harvesting tanks.

Kwarisima and fellow residents of Kyarugaju are pleased to see construction begin on a new local health clinic, and they look forward other improved amenities.

“This project has given us a lot of hope that things will be better for all of us,” said Robert Kyomunhendo, who lives in Kyarugaju.