Land: An Asset for Cambodia's Children 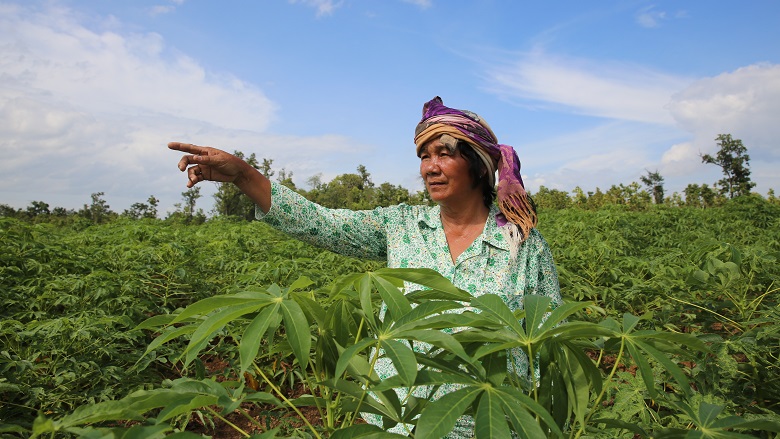 Pak Touch, a 59-year-old widow, earns an average of about 10 million riel (worth US$2500) annually from her cassava plantation. She farms on part of the 3 hectares of land that she received as part of the Land Allocation for Social and Economic Development Project (LASED).

“Look! My cassava is growing well this year. I hope I will earn more,” she smiles while pointing to her crops.

Pak Touch is one of 623 poor and former landless families in Sambok and Changrang communes of Kratie province who were granted residential and farming land under the LASED project, supported by the World Bank. She and other families moved here in 2008. In her new place, Touch has tried her best to improve her family’s status. She started by growing vegetables and raising chickens. With her earnings, she started up a small shop selling items such as salt, pepper, fish sauce, and rice.

A few years after she moved in, Touch called her four children to come back home to work on her new land. One of her sons opened a motorbike repair shop in her community. He trained his younger brother, who opened another repair shop in a nearby community. Her other two children help her to farm and run her shop.

“Now we’re better off. Besides farming, we have family shops that help us to earn more income,” Touch said. “Before, I was always looking for someone to hire me. We didn’t have enough food to eat.”

Similar to Pak Touch, 31-year-old, Mao Srey Oeun and her husband, 37-year-old Than Sok Khen, used to offer their labor place to place to make their living. Since LASED allocated them farmland, they have started growing cassava, cashew nut, palm sugar and rice. Last year, they earned around US$1000 from cassava alone.

“We stopped migrating in search of work. We are working on our own land now and our children can properly study at school,” Mao Srey Oeun said. When her family was constantly moving, their children were not able to attend school. Now both are studying in the sixth grade. 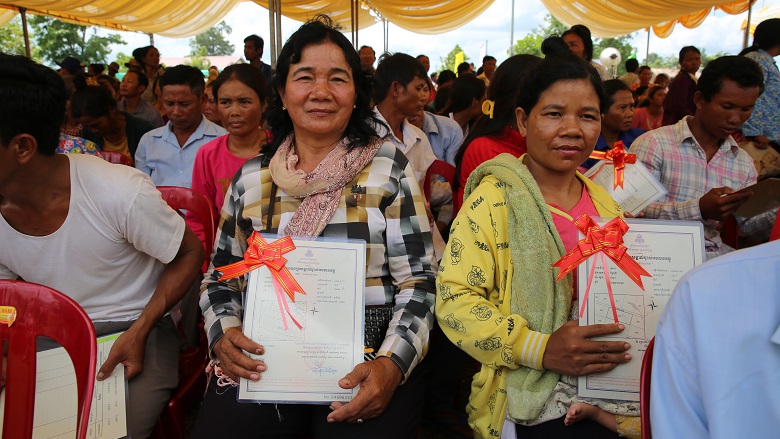 For Pak Touch and Mao Srey Oeun the land title gives them more confidence in their ownership, which they see as a great resource for their next generation.

“Now we have a real asset [land],” Mao Srey Oeun smiles. “We will give it to our children to continue to improve their lives.”

Through the LASED project, the government allocated 17,000 hectares of residential and farmland to 5,141 poor and landless families nationwide. Now, more than 2930 families have received land titles. LASED played an important role in national development by ensuring that the most needy Cambodians gained better access to services, improving their livelihoods. Access to land for poor or landless families has been and continues to be an important aspect of ending extreme poverty. LASED II, approved in May 2016, builds on the experience of LASED and aims to help these families to access agriculture extension services, education, and health facilities.