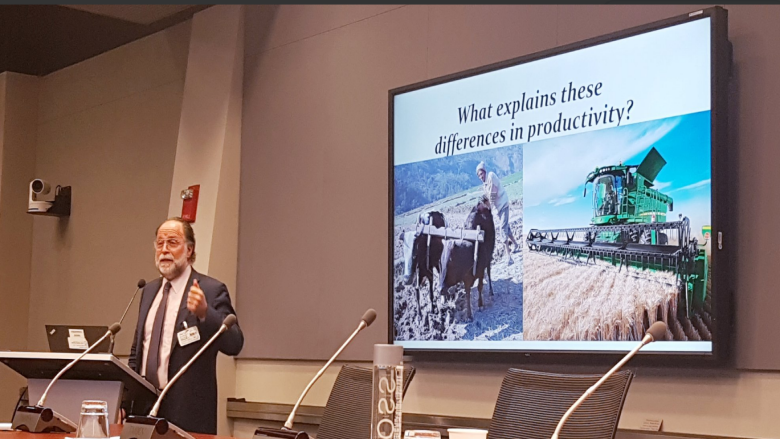 The global economy faces massive transitions due to automation and the “Fourth Industrial Revolution”. Mobilizing investment to create better jobs and improve access for disadvantaged groups has never been more important— especially in developing countries.

The third edition of the Jobs and Development Conference focused on Improving Jobs Outcomes in Developing Countries. For co-organizer Gary Fields from Cornell University and IZA, “This conference opened space for almost 100 policymakers and labor economists to exchange ideas about what works for improving jobs outcomes and how developing countries are shaping up to tackle the future of work agenda.”

The conference kicked off with a policymakers’ panel, where Prakash Loungani from the IMF, Indhira Santos from the World Bank, Steven Ayres from DfID, and Kunal Sen from UNU-WIDER discussed how to improve the design of labor market institutions in developing countries to accelerate the growth of good jobs and promote universal access to social protection; how to improve jobs outcomes for women; and ways to transform agriculture to generate better jobs in Africa. The conference featured over fifty papers chosen from more than 200 submissions.

Keynote speeches from MIT’s Daron Acemoglu and Harvard’s Ricardo Hausmann made the case for paradigm shifts in how we think about economic growth, jobs, productivity, wages, and the future of work – both in developed and developing countries.

How does technology impact productivity and wages?

Daron Acemoglu emphasized how automation is transforming the nature of work. Repetitive tasks previously performed by humans can now be automated. Contrary to what many pessimists have predicted, that isn’t making work redundant. Instead, other new tasks are being created, where humans have a comparative advantage. For instance, in the U.S.A., during the 20th century agricultural mechanization displaced workers from farming. But first manufacturing, then services hired many more workers and employment stayed high. For most of the 20th century this was linked to strong real wage growth. But since the turn of the century, although technological change has accelerated, productivity growth has been disappointing. Jobs growth has been concentrated in the bottom (low skilled) earnings quintiles and real wages and labor’s share of value added have both lagged. To find an historical precedent, we need to go back to the long stagnation of real wages at the start of the industrial revolution in the UK, from 1760 to 1850, known as “Engels’ Pause”.

"It’s often thought that the threat to labor comes from brilliant technologies [but] the real threat [is from] so-so technologies, that are good enough to be adopted, but not so productive - think of automated call centers."
Daron Acemoglu
Economist, MIT 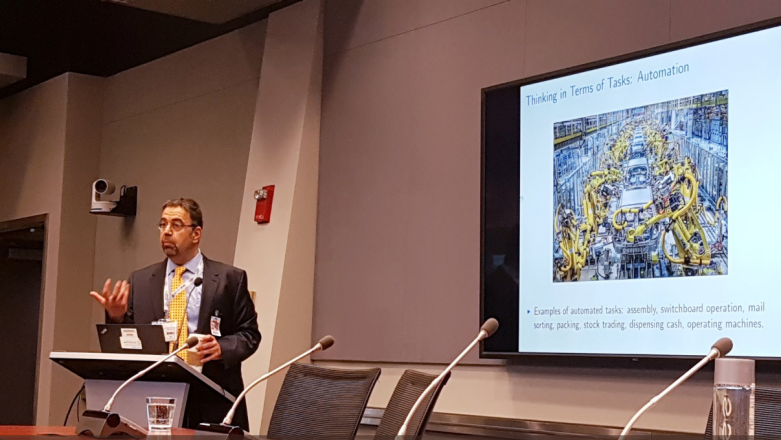 According to Acemoglu, “It’s often thought that the threat to labor comes from brilliant technologies [but] the real threat [is from] so-so technologies, that are good enough to be adopted, but not so productive - think of automated call centers.” He stressed that developing countries will also be affected by these trends, which alter the possibilities for good jobs growth everywhere. To shift the balance back towards technologies that can really boost productivity and earnings, we need to address policy bottlenecks: by modernizing education programs to prepare the workforce with skills relevant for the 21st century; by reforming safety nets and redistribution systems to incentivize high productivity jobs; and by strengthening our fiscal systems to pay for it. These messages echo the take-aways from the 2019 World Development Report on The Changing Nature of Work.

Ricardo Hausmann highlighted how complex combinations of inputs lie at the heart of productivity and income growth: “Production requires many inputs [which] are more complements than substitutes,” said Hausmann. The potential for productivity growth depends on the number of possible complementary combinations. The problem is that “you run out of some inputs before others.” Hausmann laid out an extended metaphor of “Development Scrabble” where letters equate to expertise (normally requiring both people and tools); and words equate to the innovations that result from new combinations of letters. As a country or region assembles more letters, the possible combinations grow exponentially. Seen this way, development is a process of increasing complexity. In recent decades, China and Thailand grew in complexity by moving from manufacturing garments and textiles to electronics and machinery - but Tunisia remains stuck in the garments phase.

On this view, developing countries’ failure to create enough good jobs is not best understood only in terms of poor-quality labor. It can be due to a variety of obstacles to increasing economic complexity. The art of effective policy reform lies in identifying which constraints are binding.

Workers are often stuck in low productivity jobs due to the lack of connectivity. That doesn’t only affect remote rural regions. For example, urban congestion and the lack of public transport in marginal zones prevents workers who live there from connecting to better jobs. So, we should build better public transport to integrate the urban economy and support the development of more manageable secondary cities.

Sometimes, the absence of skilled labor (such as managers and engineers) is a block to investments that could create jobs for less skilled workers. So, countries should consider liberalizing the rules that stop firms from importing skilled labor in many LICs. The bottom line is that, to get low-income workers into better jobs, just improving their own skills might not do the trick. We need policies that enhance the possibilities for combining them with other inputs that allow higher productivity – such as higher-skilled workers, equipment, inputs and modern business systems.

The messages from the keynote speakers resonated with the findings of the World Bank Jobs Group study, Pathways to Better Jobs in IDA Countries, which was also showcased at the Jobs and Development Conference. The study underlines that economic growth doesn’t always improve jobs outcomes or reduce poverty enough. It documents the many ways that workers transition towards better jobs as countries get less poor. They can increase working hours, move between locations, change sectors and occupations, shift into waged employment and move from less to more successful firms. All these transitions help to raise productivity, so earnings can rise. They normally do that by deepening the division of labor and enhancing the quality of the linkages from jobs to product and capital markets, enabling more productive combinations between people and machines in more complex value chains and productive systems.