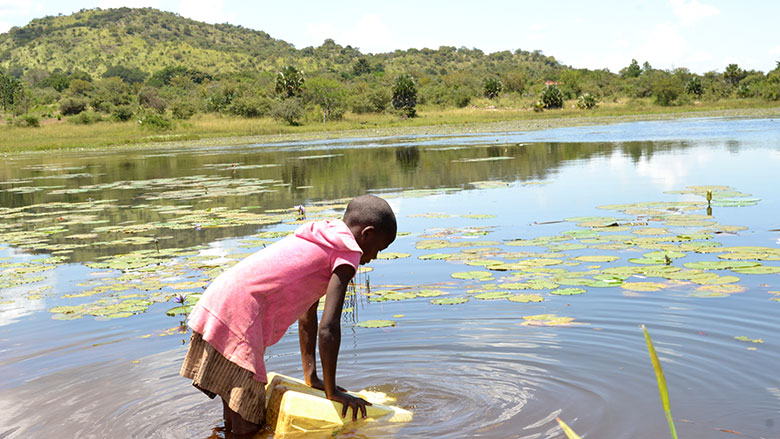 A young girl draws water from a flooded river in western Uganda. Uganda has experienced increased adverse weather patterns which have contributed to flooding in many parts of the country.

KAMPALA, May 31, 2019 –Seven months ago, residents of Kasese District in Western Uganda woke up to floods that wreaked havoc on livestock, crops and human life. Local media reported that the October 2018 floods killed one person and displaced another 8,000 others from the nine affected sub-counties.

Since 2013, the district has been grappling with floods that often cause river banks to burst. The increase in heavy rainfall is attributed to the changing climate patterns and rapid loss of forest cover, due to trees being cut down to be used as fuel.

The rate of forest cover loss in Uganda stands at 2.6% annually, one of the highest in the world. According to the 2016/17 Uganda National Household Survey, more than 80% of Uganda’s rural households use firewood for cooking. The high demand for wood fuel and limited access to energy saving alternatives means that forest cover is at risk of continued degradation.

In Mbale, residents have encroached on mountainous areas which they consider more fertile, and cleared its vegetation cover for agriculture and even settlement.

In northern Uganda, Lira District officials have embarked on tree and grass planting to trap emissions from growing municipal motor traffic and from their compost site where municipal garbage is incinerated.

The government is also promoting the use of energy saving technologies as a means of mitigating climate change effects in upcountry areas.

The district has also embarked on sustainable soil and land management by constructing trenches, particularly in hilly areas, to reduce the speed of run-offs whenever it rains.

Kasese is the champion district in renewable energy use. Katswera has been rallying households to use energy saving stoves for cooking and solar for lighting instead of clearing trees for wood fuel.

Uganda was the first country in Africa to develop and endorse its Nationally Determined Contribution Partnership Plan (NDC-PP) in June 2018. It made key commitments in this regard, including, reducing national greenhouse gas emissions by 22% by 2030, reducing climate vulnerability of climate sensitive sectors since the economy is natural resource based, and building climate resilience of key sectors and managing disaster risks.

Compared to other countries, Uganda ranks high in its number of commitments regarding climate change mitigation and environmental protection. The country has launched its National Climate Change Policy 2015, submitted Nationally Determined Contributions to the United Nations Framework Convention on Climate Change in 2018, has a Green Growth Strategy in place and has signed up to meet the Bonn Challenge.

Recently, local government officials participated in a training workshop supported by the World Bank, Uganda Country Office, in collaboration with the Climate Change Department in the Ministry of Water and Environment, Ministry of Finance and National Planning Authority.

The workshop brought together more than 30 planners, policy makers and key stakeholders for a hands-on training that introduced them to the climate change and disaster risk screening tool. Joseph Isingoma, the Kasese District Senior Planner, said that budget tagging and climate risk assessment will be easier and more systematic with the tool in place.

Francis Opolot, the Principal Climate Change Officer in the Ministry of Water and Environment, also stressed the importance of the tool.

“We are very happy that the meeting has been about the tools,” Opolot said. “Climate change doesn’t wait for processes. It is affecting our local people. We should think in an unconventional way, in a business unusual way.”

Ms. Kanta Kumari Rigaud, World Bank’s Lead Environmental Specialist, said the Bank is working with the government and partners to make the tool “a truly Ugandan product.”  “We need to embed climate considerations into the conception, the design and in the process of budgeting for projects,” she said.

Other than climate change screening, the Bank has been providing support for various projects in Uganda that seek to avert climate change, including:

The Lake Victoria Environmental Management Project, implemented by the Ministry of Water and Environment, has improved management of trans-boundary natural resources of Lake Victoria basin for shared benefits of East African Community through reduction of pollution and enhanced climate resilience in selected hotspot areas. The project is funded by a $90 million International Development Association credit.

The Uganda Clean Cooking Supply Chain Expansion Project – In 2016, the Bank approved $2.2 million to the project, which seeks to reduce the negative impacts of inefficient use of solid biomass fuels for cooking and to relieve communities from the environmental and economic burden of using solid biomass fuel.

Climate-smart Agriculture Support Project – Under the Northern Uganda Social Action Fund, the Bank is also supporting the implementation of the $130 million project (2016–2020), which is enhancing adaptation to climate risks, improving agricultural productivity and providing effective response in the event of a crisis or emergency.

The Agricultural Technology and Agribusiness Advisory Services (ATAAS) Project – With a $120 million IDA credit and 7.2 million Global Environmental Facility Grant, the country’s national agricultural research and extension systems were strengthened. Farmers were supported to improve productivity and incomes, and to strengthen their capacity to better adapt to climate change through promotion of improved technologies and sustainable land management practices.