Arounothay Khoungkhakoune is the founder of BambooLao, an initiative to reduce the use of single use plastic straws with bamboo alternatives produced by local villagers in Lao.

I have been living in the UNESCO World Heritage town, Luang Prabang, for the past seven years and leading German-speaking tour groups around the region. Working in this industry, I have seen not only the growth of tourism in Southeast Asia, but also the growth of plastic pollution. The name of my tour is called ’Treasure Along the Mekong’, yet what we actually discover along the Mekong is a lot of trash. As a mother, when I see the local children playing and swimming in these polluted waterways, it breaks my heart.

I moved outside of the main town into an area with many ethnic Khmu people, who have traditionally been hunters and gatherers. This gave me the opportunity to learn a lot about our forest and its resources, so it was only a matter of time before I discovered the local bamboo and started experimenting how it could be used to make reusable straws. I failed a few times before figuring out the right variety to use so that it would be long lasting. Thus, BambooLao was born!

How is plastic waste an issue for oceans/waterways in Laos?

About 50% of the world’s plastic goes into single use items. A lot of plastic waste ends up in the oceans from rivers: 86% of marine plastic pollution from rivers is from Asia.

Here in Lao PDR there is no recycling system and many areas have no garbage system. Some trash make it to landfills, but much ends up burned or thrown into rivers, where it may be eaten by fish, which are then consumed by local people. This can cause health problems from ingesting chemicals like BPA and BPS.

The BambooLao straw project launched in 2017 at the Mekong Tourism Forum. The response was unexpected and so amazing! To keep up the momentum and excitement, I offered free straws to businesses in the hospitality industry in Luang Prabang. In exchange, I asked them display the products for sale so we could begin generating income for the local villagers.

What do you hope your project can achieve?

I have always been a dreamer. Lao PDR was one of the most heavily bombed countries in the world, and so I wanted to create a more positive reputation, hoping that one day we can be known as the most sustainable country in the world.

I hope Lao PDR will make a change to avoid becoming polluted. Our bamboo straws are just one product that can raise awareness about making better choices for our environment.

I would also be more than happy if Lao PDR could be the center of bamboo straw production for the world! The great thing about bamboo straws is that local famers know how to find the right type of bamboo in the forest. Very poor families and people living with a disability, without an income, are capable of making bamboo straws to create income for their families. This is already happening with our village producers.

In our first year we produced over 50,000 straws and have already prevented over five million plastic straws ending up in the Mekong, since each straw can be used many times. 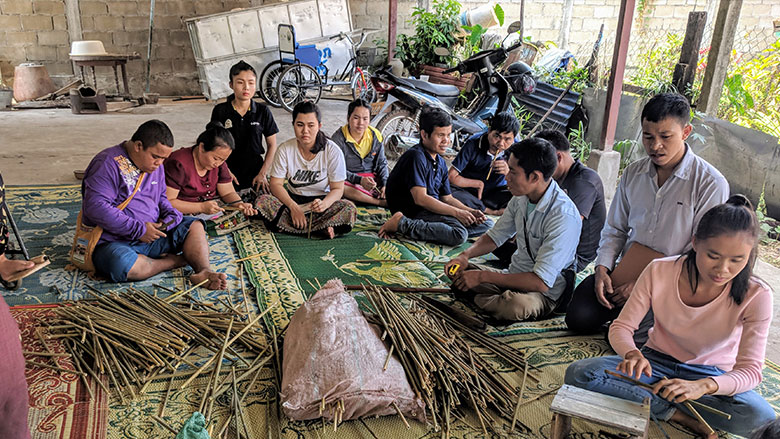 It inspires me to see our producers improving their lives by making bamboo straws. I am very motivated to see the improvement in the livelihood of our villages.

Another inspiration is my partner who helped start up BambooLao, who passed away last month of cancer. I promised to not give up making positive changes in our country and to continue supporting the farmers.

Purchase a bamboo straw and spread the love. Raise awareness by talking about the issue of single-use plastic in our environment.

What is the one change you'd like to see every person in Laos make to reduce plastic pollution?

It is very hard to break bad habits, but we have to start somewhere. I would love to see everyone refusing plastic straws in restaurants and bars and bringing their own alternative – whether bamboo, stainless steel, or paper.

I want to see everyone bringing their own bags to go to the market to show the vendors how much they dislike plastic bags. People should start using reusable drinking bottles and coffee mugs for daily use.