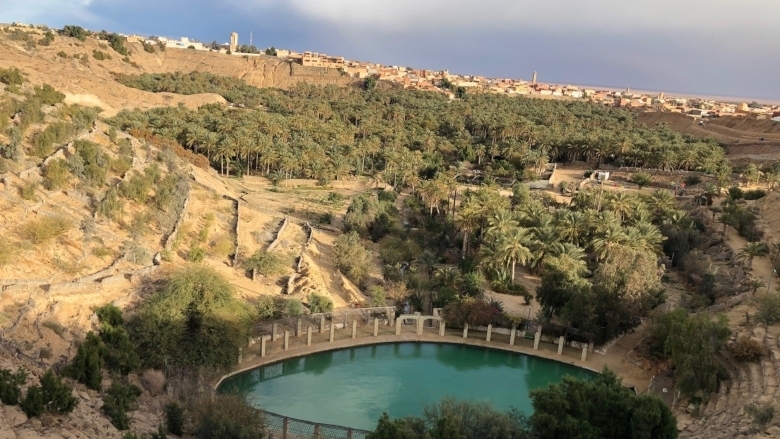 Tunisian date farmer Abdalla Ben Abdelhafidh exudes a sense of relief as he describes the restored irrigation networks and renewed water cycles recently supported by the World Bank Tunisian Oases Ecosystems and Livelihoods Project. He and his neighbors now work within newly created agricultural cooperatives through which farmers and producers share equipment, knowledge and technical expertise.

Scarcity of water is not new to Tunisia. “Our oasis ecosystem has long been under tremendous pressure,” Abdelhafidh said.  Other farmers managing the cooperative agreed, and added that in recent decades, and especially over the last few years, the scarcity of water had worsened. The deterioration of irrigation systems and a lack of natural resource management over the years had wreaked havoc with the rich biodiversity of these havens.

Today, life and livelihoods on the oasis are changing for the better, these farmers said in interviews. Irrigation and environmental studies conducted in 2014 showed that water resources had been poorly managed, and the decrepit irrigations systems needed an overhaul. Since then, canals have been cleaned, and water byways to villages completed and repaired. New storage pools have been created. “Today, our region is flourishing again. We have the best dates of the region; this work benefits everyone,” said. Abdelhafidh. 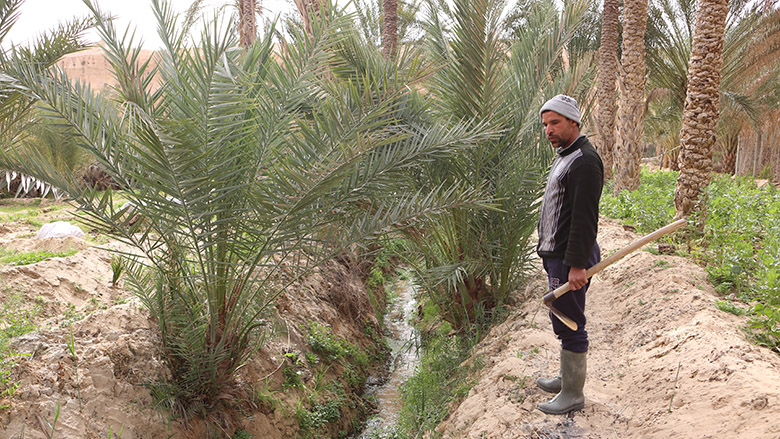 The Oases Ecosystems and Livelihoods Project has brought sustainable land practices to more than 880 hectares of land, exceeding World Bank targets. More than 5,000 land users adopted these practices, including diversifying crops and utilizing water more sustainably. More than 226 microprojects contributed to an economic boost, through direct and permanent employment. These micro-projects resulted in 735 direct jobs and improved income.  The micro-projects focused on sustainable land and water management; conservation; artisanship; income-generating oases projects such as date jam and honey; and ecotourism development.

Bringing the Tunisian ecosystems back from the brink is now a World Bank priority. “This project is focused on not only sustainable water use. We also aim to reverse the devastating trends of degradation of soil and biodiversity depletion,” said Taoufiq Bennouna, World Bank Senior Natural Resources Management Specialist.  “Jobs have been created—about half of them for women and youth—who often emigrate--through diverse micro enterprises in tourism, agricultural production such as date jam and honey, and the promotion of cultural festivals.” Bennouna said that at least 30 young adults who were set to emigrate changed their minds during the implementation of the project, when they became entrepreneurs through the microprojects.

Hanadi Rejeb’s passion for education, botany, and biology helped her find a leadership role in the development of El Guettar. “We are considered a patriarchal agricultural culture, and I am one of a few women involved in the social and economic development of our area,” she said. But according to Rejeb and her colleague Wafa Ben Ismail, life is changing on the oasis for women as incomes improve and livelihoods diversify.

In 2014, Ben Ismail graduated with a master’s degree in environmental science. The national coordinator of sustainable development offered her a “volunteer” position, which she held for six months. “I accepted the volunteer position and imposed myself,” she said smiling. Soon Ben Ismail was hired. Both Rejeb and Ben Ismail said that they aspire to mentor other women to join the movement to bring a renaissance to the oasis.

Though the oases are home to the richest biodiversity and income for some regions, reduced rainfall and the specter of increasing temperature from quickening climate change increases the urgency of this work to preserve these unique environments and the communities they support. The microprojects in Tunisia include oases cleaning, compost development and restoration and diversification of species, as well as the rejuvenation of old palms. The communities had also requested training in irrigation and sustainable water management and improved drinking water. The promotion of date honey and date jam through the microprojects also created jobs for these communities.

There is a new drive to save all Saharan oases, from Morocco to Libya, due to the ever more urgent impacts of climate change, already a reality for these countries, where date palms have thinned and fruit groves have disappeared as the sand spreads. Each of the countries are making efforts to stave off desertification but more intense interventions are needed.

By the end of 2018, the project had reached more than 17,000 beneficiaries, about one third of them women.

“This project demonstrates that an integrated, cross sectoral and participative approach to water use and environmental degradation offers best practices for the entire region. Countries are requesting that we urgently scale this work up to meet demand to restore the oases in other countries,” said Lia Sieghart, World Bank Practice Manager, Environment and Natural Resources Global Practice for the Middle East and North Africa. “This project has promoted and increased the jobs and activities that support the communities and the oases, and we will continue to support this journey toward climate resilience.”

Women leaders of the oases