Skip to Main Navigation
This page in:_
FEATURE STORY May 6, 2019 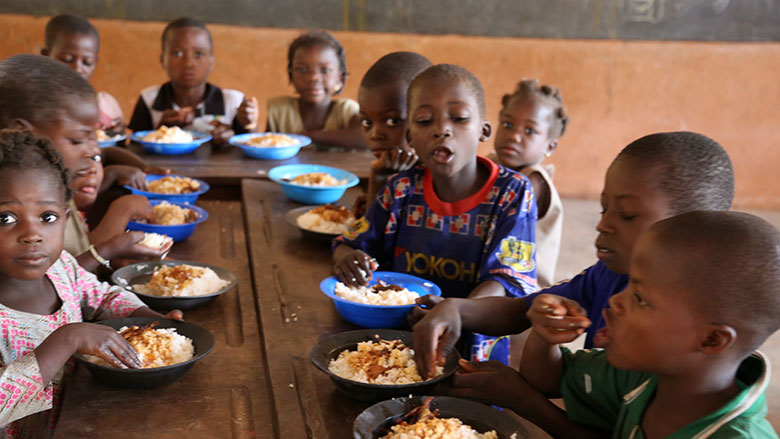 “We try to take the children's preferences into account in our weekly menu planning. Many of them come to school because they know that they will be fed,” explains Armand Bignon Hessou, the canteen supervisor.

COTONOU, Benin, May 6, 2019—The clock strikes noon at the Babazaoré public primary school, the most highly anticipated moment of the day for about 100 pupils in this village in the Copargo commune in northwest Benin. It is time for the hot meal provided by the school cafeteria every day. On today’s menu: a dish of rice with fried fish that is especially popular with the students. “Here, the children eat every day, which allows them to remain in school. We try to take the children's preferences into account in our weekly menu planning. Many of them come to school because they know that they will be fed,” explains Armand Bignon Hessou, the canteen supervisor.

"Before there was a canteen, many children did not return to school after traveling long distances to go home for lunch. Those who remained at school would light a fire under the tree to roast yams or would settle for mixing some garri in a bottle of water"
Basile Ossoté
School principal of Babazaoré 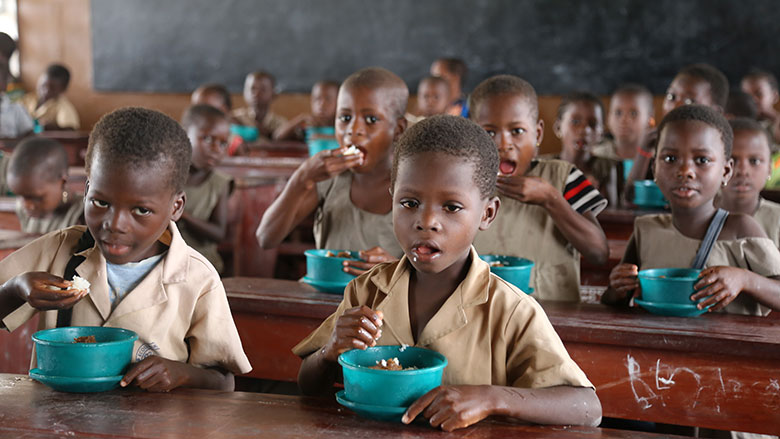 Some 89,000 children in 25 communes in the country receive a hot meal daily with ingredients sourced exclusively from local providers.

The long trek home for lunch

Fousseni Séibou tucks into his plate of rice with relish. Only 8 years old, twice a day this Grade 1 student walks the 11 kilometer stretch that connects his village of Kompari to Babazaoré. “If the canteen did not exist, there is no guarantee that Fousseni and his brothers would go to school,” explains Basile Ossoté, the school principal. “Before there was a canteen, many children did not return to school after traveling long distances to go home for lunch. Those who remained at school would light a fire under the tree to roast yams or would settle for mixing some garri (ground cassava) in a bottle of water.”

Today, his school welcomes more and more children from the villages of Kompari and Kikira, some 5 kilometers away, and even from Goumougou, located 7 kilometers from Babazaoré. Moreover, they are among the top students. Thanks to the cafeteria, school enrollment has also climbed from 84 to 145 pupils, and net dropout rates have been on the decline for three years.

“The commune of Copargo is sparsely populated. This canteen helps make the school more inclusive for children from the more far-flung villages. This is why it is important to allocate more resources to school feeding programs and extend them to all schools in the country,” states Djakpèdo Biao, president of the Copargo parents’ associations. 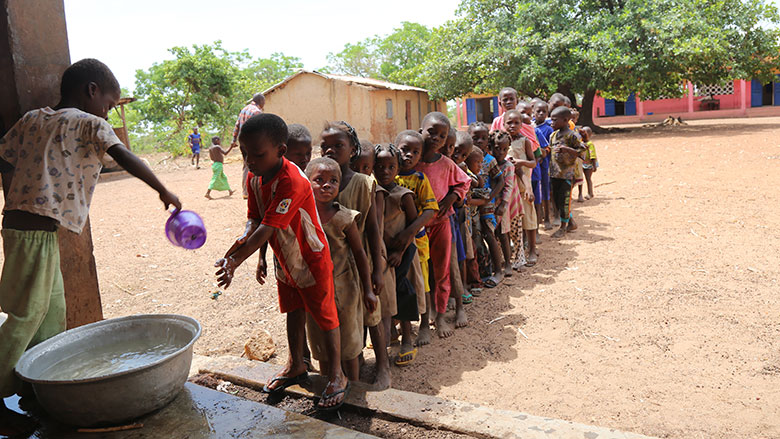 School cafeterias first emerged in 2014. Today, 396 public primary schools have one. Every day, they feed more than 89,105 pupils in 25 communes in the country. “When a canteen opens in a school, enrollment and attendance rates improve instantly,” notes Claude Thierry Gbèdégbey Adjovi, Regional Education Lead for Copargo-Ouaké.

Convinced that good nutrition plays a critical role in a child’s development and educational performance, as well as productivity in adulthood, in late 2018, the World Bank launched its first ever human capital index. This new tool measures the contribution of health and education, which are equally as important as economic indicators, to the productivity of a country’s next generation.

By providing a hearty, balanced meal to pupils, the canteen is helping combat challenges relating to malnutrition that affect extremely poor families and contributing to improving Benin’s ranking on the human development index, which currently stands at 127 out of 157 countries. “In a number of communes, poverty and malnutrition rates have already reached crisis levels. Barely two out of ten households manage to have one meal per day. The meal served by the canteen offers pupils a minimum level of nutritional stability and helps them maintain good health, with the attentiveness and vitality required to pursue their studies,” explains Kassoumou Arouna, head of the school feeding service in the Departmental Directorate of Preschool and Primary Education in Atacora and Donga departments. “We have noticed that there is very little infant mortality associated with malnutrition in schools where the FCB-PME canteens have been established.”

By entrusting meal preparation to local providers, the program is also helping stimulate the community’s economy. “All the food consumed by the children comes from local farms,” Basile Ossoté points out. “It is therefore less costly, and we are confident in the quality. Even the rice the children eat comes from the fields of Babazaoré.” In some schools, students’ parents have even grown vegetable gardens to offer a number of products to the canteen. 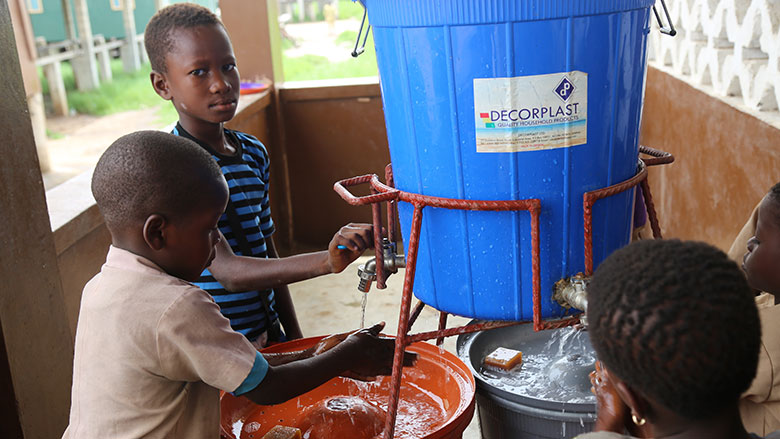 The same handwashing session before the meal at another school, a few kilometres from Babazaoré in the village of Sô-Zounko, in the commune of Sô-Ava. Photo: Gnona Afangbeji, World Bank

Cofinanced by the Beninese Government and several of its international partners, including the Global Partnership for Education through its World Bank-administered Common Fund Budget (FCB), the school canteen project was subject to an impact evaluation in July 2018. The review noted positive outcomes in over 88% of boys and 90% of girls benefiting from the project. With the overall objective of improving the standard and quality of education in Benin, this program is also developing other initiatives to build teachers’ capacities in the 25 most disadvantaged communes in the country, such as constructing classrooms, distributing school kits, and implementing an education management and information system.

This success encouraged the Government to continue to finance the school canteens after the closure of the FCB program in April 2018, with $5.9 million (CFAF 3.4 billion) allocated to providing hot meals to pupils in 3,179 schools during the 2018/19 school year. Four school canteen programs are already in place in some 7,360 schools. “A well-nourished child will stand a better chance of succeeding at school and becoming a healthy and productive adult,” explains Katrina Sharkey, World Bank Country Manager in Benin. “By ensuring that its children are properly nourished, Benin is investing in its economic and social future, because a high-performing, competitive economy depends heavily on its human capital.”