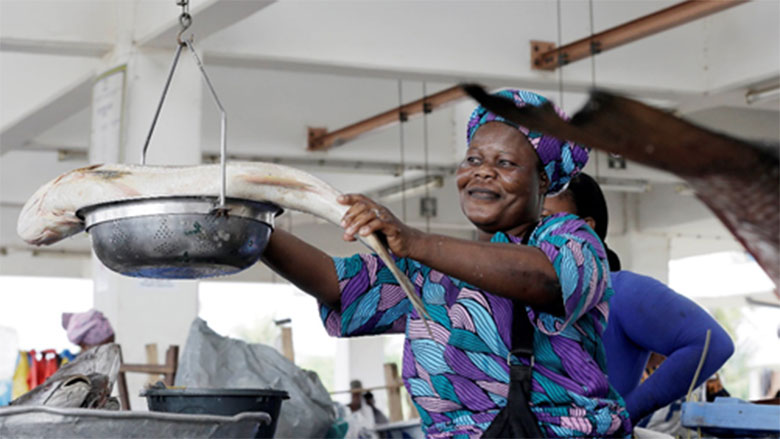 LIBREVILLE, May 3, 2019 – Central Africa, with its wide variety of landscapes, its coastline rich in natural resources and its forests, which constitute the second largest ecological lung on the planet after the Amazon, offers enormous economic and environmental assets. However, the countries of this region stretching from Chad in the north to Angola in the south, are facing an increasingly unstable climate with frequent droughts and floods.

Like 70% of the region's citizens who are mainly fishermen and farmers, Rosaline Dossou, a fish reseller at the Oloumi Artisanal Fisheries Support Center in Libreville, was severely affected by these extreme weather phenomena.

“Why, in recent times, fishing is no longer fruitful as before,” she wondered, surprised that fish catches are declining.

A common response to a shared challenge

To tackle these challenges that have a significant impact on the region’s resources and economic activities, the Economic Community of Central African States (ECCAS) brought together the 11 countries of the region for the Hydromet Forum in Libreville, with the support of the Government of Gabon and international development partners. Organized as part of the Africa Hydromet Program, the forum aimed  to enable all countries in the subregion to protect their populations and preserve their precious natural resources by establishing a common platform for the prevention of environmental and natural disaster risks.

''By pooling their efforts to create hydro-meteorological services for Central Africa as a whole, our countries will be able to anticipate phenomena such as floods and droughts and warn the population in time for them to get ready,” said Justin Ndoundangangoye, Gabon’s Minister of Transport and Logistics. “This will prevent many human and material losses.”

Beyond the commitment of ECCAS and because of a collective stake, all countries, local development structures, international bodies and organizations, university researchers and private sector are mobilized by the improvement of hydrometeorological services.

“In many parts of Africa, hydromet equipment is outdated and investments to improve these services are low,” said Marie Chantal Mfoula, ECCAS Deputy Secretary General in charge of the Department of Physical, Economic and Monetary Integration. “By modernizing our hydro-meteorological services, our countries will be able to obtain essential information on weather, hydrological and climatic hydrological conditions in order to predict natural disasters and to take preventive measures to protect the public infrastructures in which we have invested.”

A key tool for managing and reducing risks

Once hydrometeorological tools are established, local communities will have access meteorological forecasts and tools in real time, including radio and mobile alerts, a particularly valuable tool for fishermen and farmers. This will enable a farmer, for example, to better plan the dates of his agricultural work and to organize himself to limit losses in the event of a drought announcement.

The forum concluded with some recommendations and a roadmap for Central Africa, based on three main priorities to improve the access, development and delivery of hydromet information:

Convinced that hydrometeorological services represent an essential ally for the sustainable development of their region, Central African States hope that by integrating the daily lives of all their citizens, these services will enable them to adapt to a new climate reality and become more socially and economically resilient.