UK Advisor Discusses His Role as a Caregiver 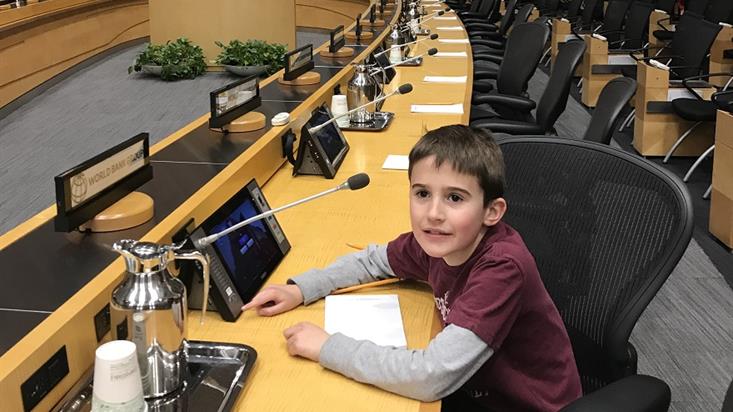 "Organizations need to understand the perceptions on how it feels to be disabled and put in place policies and encourage (and enforce) behaviors so that no one will be discriminated against. More diversity gives us better solutions."

Andrew Clark met his future wife, Magui, 17 years ago when they both joined the World Bank in 2002 among the first group of Junior Professional Associates.

"It allowed young professionals exposure to the Bank for two years before they sent us out to get more experience and knowledge of the wider world and the international development community. The program also benefited the Bank by bringing in younger voices," said Andrew, now an advisor in the UK ED's office, who grew up in Hong Kong, the son of an academic and a teacher.

After he left the Bank, he traveled to Afghanistan where he worked as the DFID Country Economist. He was then seconded to the African Development Bank in Tunisia as a senior economist and subsequently moved to Mozambique as the team leader for DFID's Growth and Economic Development team.

While posted in Africa, Magui and Andrew welcomed their son Adrian in 2010. But after moving back to DFID HQ in Scotland, it soon became apparent that Adrian was not developing at the same rate as his peers. A couple of months after turning four, he was diagnosed with autism.

According to the Centers for Disease Control (CDC), approximately 1 in 59 children was diagnosed with autism in 2018 in the US. In addition, some 15 percent of all children have some form of development disability and nearly 1 in 5 adults have a disability.

For Andrew and his family, working in the field or choosing the best jobs for their careers became increasingly difficult as many countries do not have the services that Adrian needs to thrive and achieve his fullest potential.

"We slowly realized that for a time we had to think of our careers in the short-term," the Scottish native remembered. "From now on, decisions would be determined on how well posts worked for our son's development. It's not about my career vision but what would be best for our family and son. Unfortunately, in many organizations these two things are not always compatible, even the though they should be."

But even after coming to this important realization, it was difficult for Andrew to be frank with his colleagues about Adrian's disability as he was worried about how it would affect the perception of how well he could do his job and whether this would impact his career ambitions.  Some of his managers approached his situation as a choice between his son and his career, while others thought it was a unique attribute that provided benefits to those he worked with and managed.

"It was a hard thing to open up about," he recalled. "One colleague even told me I would be 'career- constrained' because of putting my family first."

Many organizations, though well-intentioned, may not know how to best provide support to those with disabilities and their care-givers. In addition, staff affected by disability often are worried about being open about their situations, fearing that it might negatively affect their careers and benefits. Employers need to change their focus from thinking about "disabilities" to thinking more about "unique abilities," Andrew said.

"This can be a real opportunity. Greater emotional intelligence allows me to better manage how I lead," he said. "I'm 20 times better at these things after what I've gone through with my family."

In March 2019,  the World Bank Group will launch a staff survey on disability and caregiving to assess how many people are affected within the institution, staff perceptions on how the organization addresses disability internally, and what support could be offered to assist them.

"This is a cultural change that is needed, never easy but the journey needs to start" Andrew said. "Organizations need to understand the perceptions on how it feels to be disabled and put in place policies and encourage (and enforce) behaviors so that no one will be discriminated against. More diversity gives us better solutions, even more so in development."

He acknowledged the "stresses and strains" on his family during this journey, "it has not been easy", but hopes that his candor and openness will "encourage and empower people that can't be open and are scared to speak up, leaving them even more isolated and hopefully improve working cultures."

When asked about his son today, Andrew's face beams with a wide smile, describing Adrian as a typical and not so typical eight-year-old who loves all sports, especially soccer, reading his favorite Tin-Tin books but most of all being around people.

Ultimately, Andrew is happy with the choices that he's made for the good of his family while still having a varied and fulfilling career.

"I have flexibility from this office. I feel I'm quite lucky," Andrew said. "I've also learned to embrace who my son is, not what he might not be or find difficult to do, a lesson I think all organizations should embrace." ​