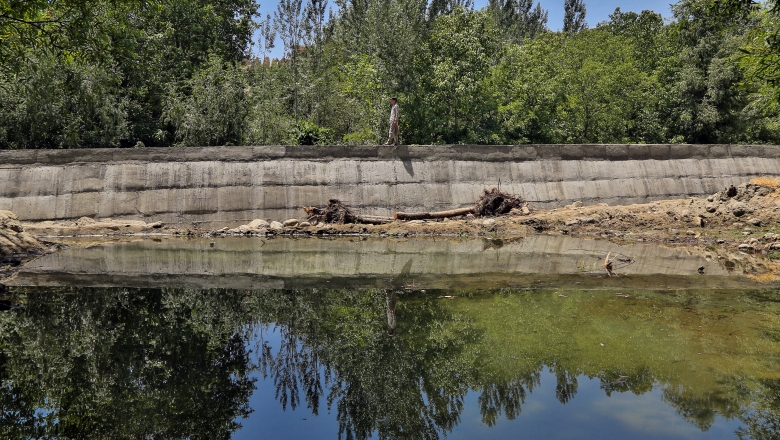 The 1.5-meter high and 507-meter long flood wall built by Irrigation Restoration and Development Project (IRDP) is protecting over 70 hectares of farmlands from seasonal flooding in Farza district of Kabul Province.

Kabul province – In a Kabul city village, five small boys run and hide amid the trees that line a newly completed river bank protection flood wall. Laughing and sweating, the boys take brief refuge from the intense sun at the base of the wall when one in the group spots a camera. They excitedly call for their picture and the photographer obliges, snapping a few photos as the boys climb on top of the wall.

But farmer Khan describes the wall’s main purpose. “Before the construction of the flood wall,” he says, “when the river swelled too much, the water destroyed parts of our homes and gardens, and sometimes we had to leave our houses.”

The construction of the 507-meter long flood wall began in December 2017 and was completed in July 2018, with funding and technical support from the Irrigation Restoration and Development Project (IRDP).  The flood wall protects four villages—Hassan Khail, Mosali, Nimat Khail, and Sarwar Khail—from flooding, benefiting 655 families.

The flooding happened several times a year and sometimes the flood waters reached levels that left residents stranded in their homes for several days. “Because there was no road when the river was flooded, we had to walk through people’s gardens to go anywhere, which took longer and annoyed the neighbors,” recounts farmer Zalmai. “When there was a really bad flood that affected the houses, we could not even do this.”

With the flood wall, these problems will be resolved, Zalmai says. .

"Before the construction of the flood wall, when the river swelled too much, the water destroyed parts of our homes and gardens, and sometimes we had to leave our houses."
Khan
Farmer, Kabul province 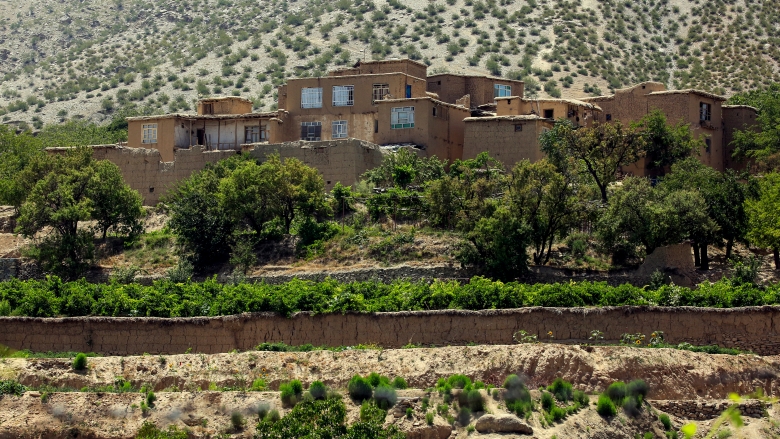 . Engineer Azim says, “In total, 72 hectares of land and crops and a school have been saved from flooding because of the wall.”

IRDP is implemented by the Ministry of Energy and Water (MEW) and aims to improve water resource management in targeted areas through irrigation projects as well as fortification projects, like the river bank protection flood walls. . It operates in six regional offices: Kabul, Kandahar, Kunduz, Herat, Jalalabad, and Mazar-e-Sharif.

The project, in partnership with the Government of Afghanistan, is supported by the Afghanistan Reconstruction Trust Fund (ARTF), managed by the World Bank on behalf of 34 donors, and the International Development Association (IDA), the World Bank Group’s fund for the poorest countries. 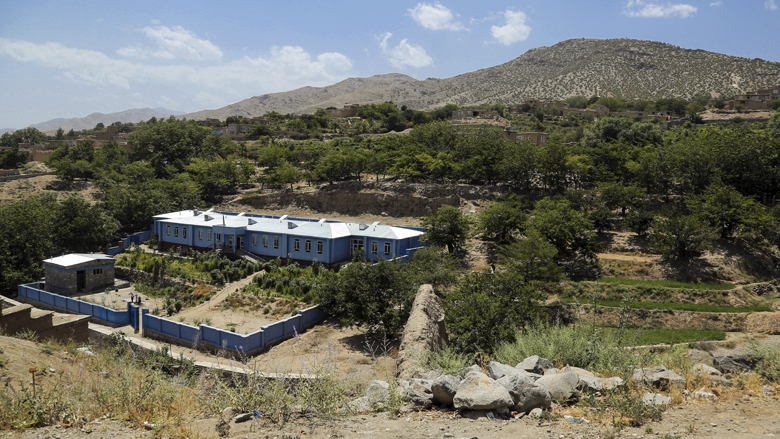 In the past Farza district's main road was blocked from time to time due to seasonal flooding. However, it is now accessible for all villagers, especially students can go to school more conveniently. Photo Credit: Rumi Consultancy/ World Bank

Wi. Farmer Ghaws recounts the sense of hopelessness after a flood destroyed his crops and garden for the third time. “My family was without hope and we accepted that our land would always be a part of the river,” he says.

He says that fellow village residents felt the same way. “Before, people were making efforts to rebuild and improve their gardens and crops, but slowly our village gave up hope thinking that another flood would always come.”

The flood wall will also improve the daily lives of the villagers by allowing them to access basic and essential services easily during the rainy season. . Recognizing the immense benefits of the flood wall, two villagers in rotation voluntarily helped the construction team every evening to build sections of the wall.

Another farmer, Zaman recalls the difficulties in the past, when flooding forced the villagers to take alternative routes that were longer, more precarious, and inconvenient. His two sons “had to zig-zag between neighbors’ land and crops, which caused them to be late to school. The normal 20-minute journey would take up to an hour if the boys had to find an alternative route and their difficult travel made their clothes and shoes dirty and torn.”

Farmer Zalmai says he and his fellow villagers are very satisfied with the construction work and with the government’s efforts to help people like him improve their living conditions.