Dhaka, April 4, 2019: Driven by industry, Bangladesh’s economy continues to grow at an impressive rate said a new World Bank report, The Bangladesh Development Update 2019 “Towards Regulatory Predictability.” Bangladesh is among the five fastest growing economies of the world, in spite of insufficient private sector investment.

Bangladesh’s growth outlook remains strong and stable. Sound macroeconomic policies – such as keeping the budget deficit below 5 percent of GDP – and resilient domestic demand have led to growth in manufacturing and construction industries on the supply side. On the demand side, growth is led by private consumption and exports. After a modest performance last year, export earnings and remittances have bounced back helping the rural economy grow faster. In addition, the country has substantially improved its electricity generation and a bumper agricultural harvest has further stimulated growth.

Private Sector Investments Remain weak. Foreign Direct Investment (FDI) remains low at less than 1 percent of GDP. Net FDI inflow amounted to $910 million in the first half of FY19, compared with $823 million in the first half of FY18. The share of machinery in total imports for leading industries such as textiles, garments, pharmaceuticals, packing and leather has also declined, reaching 31.8 percent in July-November 2018 from 55.6 percent in 2009. For Bangladesh to be an attractive destination for industries, it is critical to make resources such as land, electricity and gas available.

Lack of Regulatory Predictability. Businesses face regulatory uncertainty on various fronts. Regulatory predictability matters because it makes property rights insecure, thereby constraining investment. This leads to uncertainty for businesses – medium-size firms seem to bear the brunt more than large or small firms – and with inconsistencies in policy implementation, it can adversely affect employment growth. Based on a survey of 72 businesses operating in Bangladesh, the following issues were marked as critical to address:

-          Create a website and automatically publish all new laws, SROs

Bangladesh’s regulatory system needs the establishment of a technical regulatory oversight body at the center of government to oversee, lead and report on regulatory reforms. 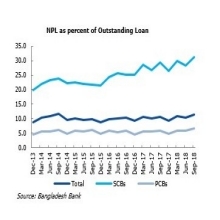 How can Bangladesh continue to grow?

In order to become an upper middle-income country by 2031 and achieve high income country status by 2041, Bangladesh will require huge investments in physical capital, human capital, and innovation enabled by reforms in areas such as financial sector, business regulation, and addressing the infrastructure gap.
The World Bank continues to support the government’s reform efforts to create large-scale, inclusive jobs, besides addressing the needs of other development challenges. Sustained reform efforts are needed in the following areas:

-          Tax structure along with addressing bottlenecks in public financial management

-          Infrastructure financing strategy in partnership with the private sector

-          Skills for jobs growth starting with a skills development strategy