From Fighters to Peace Builders in Tanganyika Province 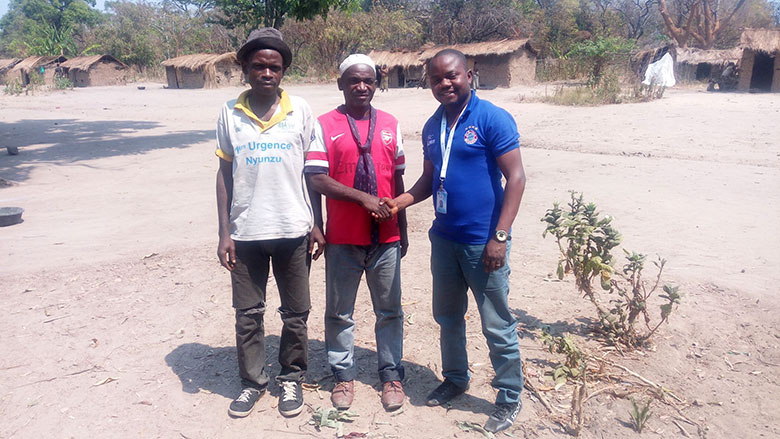 “We were discriminated against and marginalized and had to defend ourselves,” counters Nyumba Isha, head of the Twa self-defense militia, shaking hands with a mediation officer from international NGO Search for Common Ground.

KINSHASA, March 19, 2019—As you travel across the Nyunzu territory in Tanganyika Province, there is no hint that barely three years ago, this now-peaceful region in the southeast of the Democratic Republic of Congo was the scene of violent clashes between the Twa and Bantu communities, caused by social tensions and land disputes that have plagued them for several years.

An eye for an eye and a surge in violence

These are still painful memories for Oscar Muhemba, former head of the Bantu militia: “My father was killed in his own home. Next came the pillaging of all our possessions. So we formed a self-defense group to avenge ourselves.”

“We were discriminated against and marginalized and had to defend ourselves,” counters Nyumba Isha, head of the Twa self-defense militia. For many years, this vengeful posture adopted by each community led to the creation of militia groups and wrought devastation across the region. Villages and roads were blocked, preventing people from moving about freely. Villages were set ablaze and pillaged, forcing inhabitants to flee. Economic activity was paralyzed.

“Insecurity was widespread: children no longer went to school, and women stopped working in the fields,” recalls Francoise Swedi, a school principal and resident of Nyunzu. 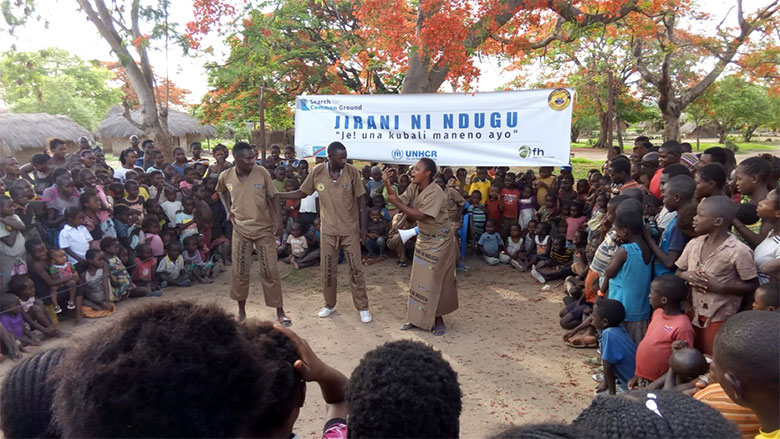 Skits starring members of the Twa and Bantu communities, use humor and fictional plots as an outlet for grudges and grievances. Photo: Search for Common Ground.

In March 2016, in an effort to de-escalate tensions, the government decided to intervene via the DRC Eastern Region Stabilization and Peace-Building Project (STEP), financed by the World Bank through the International Development Association (IDA), the part of the World Bank that helps the world’s poorest countries. The project was implemented by the DRC’s Social Fund, which organizes community outreach activities in order to manage the existing conflicts and prevent new ones, thus promoting peaceful dialog and nonviolent coexistence.

“My neighbor is my brother”

In collaboration with the international NGO Search for Common Ground, which specializes in conflict management, the project began by working closely with traditional chiefs and community leaders to develop local mediation committees. An outreach campaign entitled Jirani Ni Ndugu (“My neighbor is my brother”) was then launched, with community reconciliation activities aimed at combating prejudice, misinformation, and distrust of other communities. . The public was also encouraged to get involved and find peaceful solutions to the problems depicted in the sketches. Rebroadcasting these skits on the radio each week helped further publicize these activities across the region. 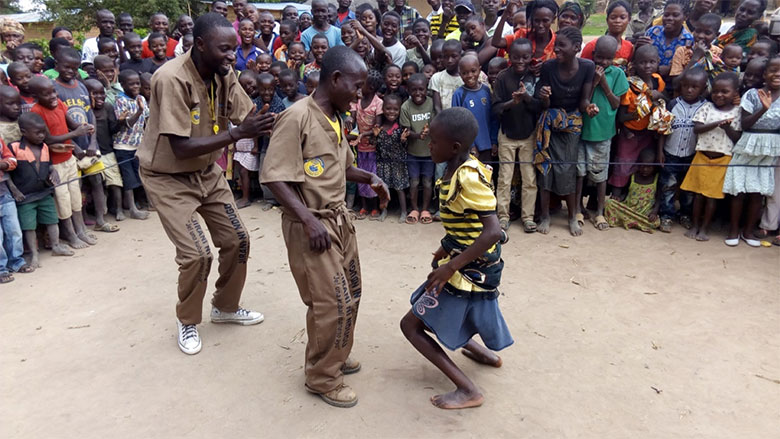 The public was also encouraged to get involved and find peaceful solutions to the problems depicted in the sketches. Photo: Search for Common Ground.

These efforts successfully convinced militia leaders to lay down their weapons and participate in the activities geared toward achieving social cohesion and peaceful coexistence. Together, they created joint development and peace-building bodies. “The greatest lesson I’ve learned from these activities is the importance of forgiveness and reestablishing a climate of trust between the two communities,” says Oscar Muhemba.

The success of these activities has resulted in the creation of 47 peace and mediation committees in the six territories in Tanganyika and in a portion of Haut Katanga. “It is important to note that the DRC’s Social Fund has been obtaining positive results since 2002 in the East, one of the most challenging regions in the country,” affirms Samantha de Sylva, World Bank Task Team Leader. 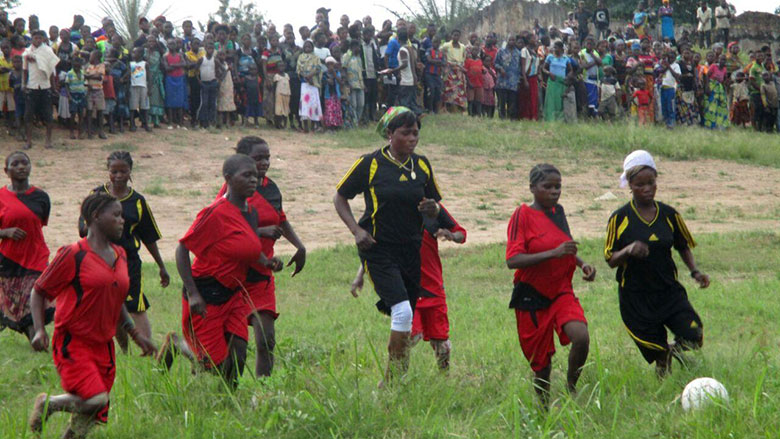 Activities included sporting events between the Twa and Bantu communities, aimed at combating prejudice, misinformation, and distrust of other communities. Photo: Search for Common Ground.

Peace and social activity are making a comeback

The project also aims to improve economic and living conditions for residents. “But this goal cannot be met unless there is peace in the relevant areas, because there can be no development there without peace,” explains Ruphin Bo Elongo, Coordinator of the Social Fund.

To strengthen these reconciliation efforts, the STEP project is providing support for the development of various income-generating activities established by the joint peace committee.  In his village of Mukomena, Nyumba Isha has opted to become a farmer. He leases hectares of fields, which he cultivates, and has convinced other members of his community, who have traditionally been hunters and nomads, to do the same.

To date, the STEP project has been implemented in 291 community in the provinces of Haut-Uélé, Bas-Uélé, Tshopo, Ituri, North Kivu, South Kivu and Tanganyika. It allowed the creation of 350 local centers for prevention, mediation and conflict resolution. And benefited to 580,000 people who were able to work temporarily in public labor-intensive activities, while 38,740 vulnerable households were supported for their agricultural or livestock activities.

“The situation in which we had found ourselves gave us little hope, but our determination and our commitment to peace did not waver. ,” concludes Derrick Manegabe, director of conflict management at the Social Fund in Tanganyika. 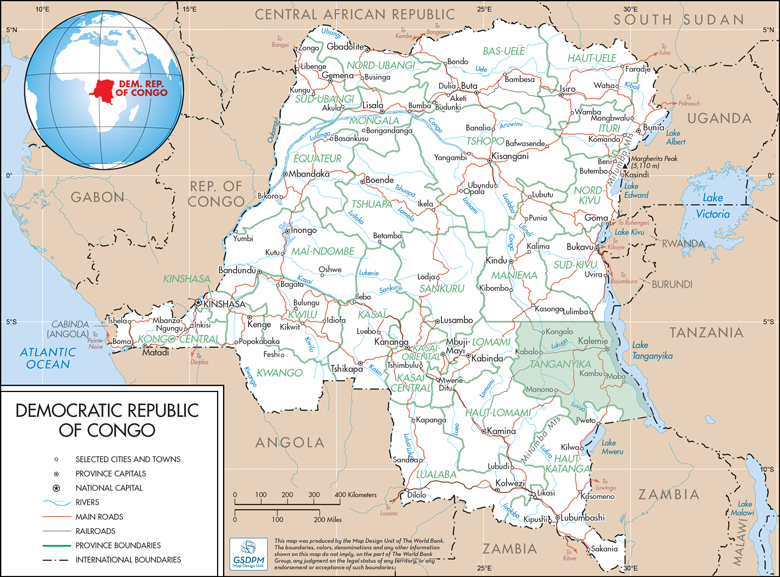