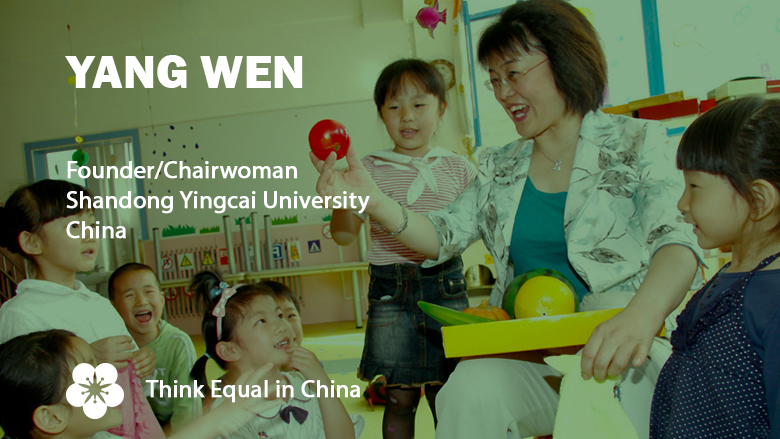 On International Women’s Day 2019, we are sharing stories of women doing inspiring work across China. Their diverse contributions highlight the transformative power of women in the country. Yang Wen is Chairwoman of Shandong Yingcai University, a private educational institute. She published the groundbreaking English Pedagogy for Children in China.

In 1990, funded by a World Bank loan, I went to study at the University of Nottingham in the UK, a key turning point for me to embark on the road of entrepreneurship.

Upon returning to China, I resigned from Shandong University, and founded Shandong Yingcai University. As a degree-level university approved by the Ministry of Education, Yingcai now has educated more than 100,000 people. For the 8th consecutive year, the school ranks Top 3 in the Private Higher Education Institution Ranking in China. In 2017 and 2018, it ranked 1st place in the Comprehensive Private University Ranking.

My English for Children textbook series sold more than 1 million copies. The books English Pedagogy for Children and English for Preschool Education have filled a need in China. This pedagogy was recognized as one of the 10 Major Schools of Chinese Contemporary Foreign Language Pedagogies.

Enthusiastic about philanthropy, I set up a “China's 10 Most Outstanding Mothers” or the Yang Wen Scholarship totaling RMB 30 million (US$ 447,556), and enabling 4,000 students to complete college studies. I have also delivered a keynote series on family education at Shandong People's Broadcasting Station, wrote columns for China Women’s News, and published books such as “Growing up with My Son” and “Let's Be the Best Mothers” catering to thousands of families.

It is not an alarm clock that wakes me up, but a dream.

It is still a dream. From a textile worker to a college student, from an overseas scholar to a kindergarten teacher, from a public university professor to a private university founder, my dream has been to establish a good university to enable more Chinese children to receive higher education.

Just do it NOW! Nothing is impossible!

By that time, China’s Two Centenary Goals will have been largely fulfilled. China's ecological environment will be better, with bluer skies, clearer water, greener mountains and cleaner air. China’s overall national strength will be bigger, its economy stronger, and society more harmonious. The young will receive education, the elderly will receive support, and people's lives will be more affluent.

Gender equality is a basic national policy in China.  As a Chinese woman, I see that China has achieved basic gender equality in terms of education, employment, starting a business, political and social participation, and in family.