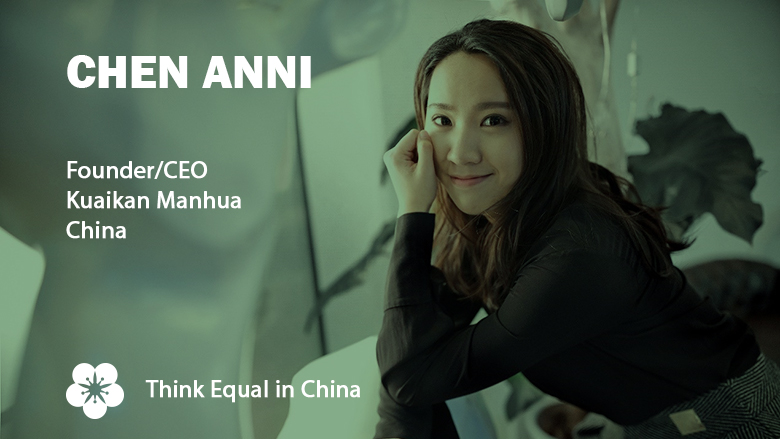 On International Women’s Day 2019, we are sharing stories of women doing inspiring work across China. Their diverse contributions highlight the transformative power of women in the country. Chen Anni is the founder and CEO of Kuaikan Manhua, China’s largest online and mobile platform for original comics.

My name is Chen Anni and I was a comics writer. My Weibo account is @greatanny. I established Kuaikan Manhua in 2014. It has become the largest platform of original comics in China with more than 170 million users. More than 40 million young people read comics on the platform on a monthly basis.

My motivation is to achieve our corporate vision in a regular and long-term way, because we want to bring happiness into the world and build a super cultural entertainment ecosystem in the future.

I chose this life because I wanted to create something. I was a comic book author before, and my works are very popular on Weibo. I realized that comics might be popular in China, so I established Kuaikan Manhua. I hoped to create more comics and train more cartoonists. I was excited by this idea, so I devoted myself to it.

On the road to start a business, you will encounter many difficulties and hardships. Sometimes you will even be questioned: can young women do that as well as men? I think the only way is to show them and stick it out.

At present, the biggest problem in the Chinese animation industry is the lack of national-level IP. After all, this industry started late. I believe that as the industry continues to develop and mature, and talents continue to flow in, such works will surface.

In 25 years, China’s economy will be more prosperous, art and science may be more developed, and the animation industry in China will develop enormously. It is not only loved by young people, but it can be popular with all ages. There must also be a national-level animation IP, a world-class, Chinese animation that will be popular around the world.

I hope that in the areas that where it was previously thought that only men could do well, women will also do well and have a larger presence. In Kuaikan Manhua, we are committed to promoting gender equality. Job performance and promotion opportunities are never determined by gender, but by performance. In 2018, Kuaikan Manhua participated in the Be Yourself: Pledge for Progress campaign led by the British Embassy in China in partnership with China’s Mulan Club and the British Chamber of Commerce in China. We committed that the proportion of female heads of departments in the company would not be below 30%, and that we would safeguard gender equality and the rights of women workers.