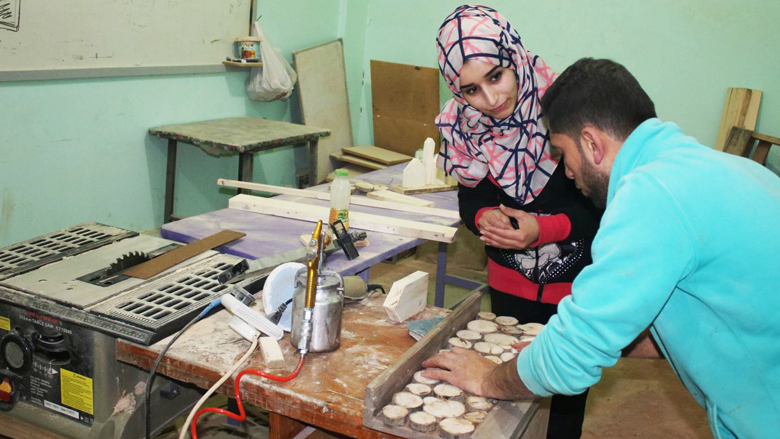 Aya Kishko with a staff member.

On any given day, more than 200 trucks, each containing about 24 wooden crates of merchandise, enter Gaza. While the goods are distributed, the crates are usually discarded out onto the streets. Not only are they an eye sore but in the small, densely populated city they are also an environmental hazard.

The saying “one person’s trash is another person’s treasure” could not ring more true in the case of Aya Kishko, who at only 26 years old founded and is running her successful Basata Up business in Gaza. Aya launched an enterprise built on upcycling discarded wooden crates into high value furniture. On any given day, more than 200 trucks, each containing about 24 wooden crates of merchandise, enter Gaza. While the goods are distributed, the crates are usually discarded out onto the streets. Not only are they an eye sore but in the small, densely populated city they are also an environmental hazard.

Aya, a graduate of architectural engineering, is among a small but growing number of rising female innovators across the Palestinian territories who are breaking new ground in non-traditional and high impact fields. In the recent World Bank report Enhancing Job Opportunities for Skilled Women in the Palestinian Territories, supported by the Norwegian government, a striking feature is the untapped human capital of the Palestinian labor force. This untapped supply of talent and human capital is largely characterized by female and youth.

“I strive to provide opportunity and hope to Gazan youth, many of whom had been jobless before working at my company,” says Aya, ”I would especially like to encourage and inspire more women in the field; one idea is to establish a women’s training center[in my workshop to involve them not only in design and marketing but also in implementation and manufacturing, which tends to be male-dominated.”

About three out every four post-secondary graduate women across the Palestinian territories are in the labor force yet close to half are unemployed. While the share of educated males in the labor force is also high, unemployment is much lower at 18 percent. There are also large disparities by region. For example, 60 percent of the economically active women who hold postsecondary degrees are unemployed in Gaza, while for their male peers it is only 28 percent (Figure 1). . 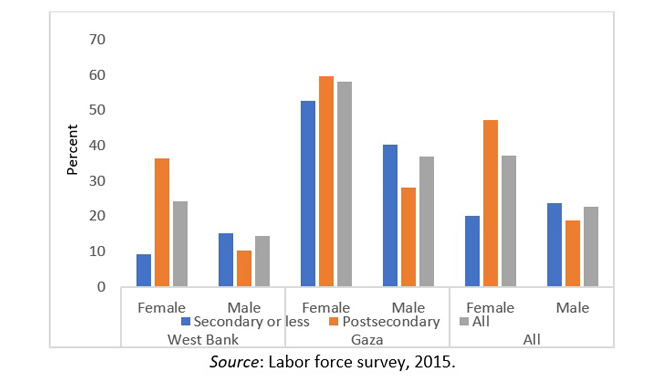 There are many reasons for educated men having the advantage in the labor market, especially in the private sector. Women face multiple constraints, among them the potential for employer discrimination. It is not clear at what point in a woman’s career discrimination becomes the binding constraint, but evidence suggests that it may exist at the point of entry into the labor market. A prevalent view among employers revealed in qualitative surveys was that men were viewed as more deserving of a job.

Wage discrimination also exists in the private sector, which could pose an additional barrier to entry. The report shows if a Palestinian female worker were to be compensated as equally as her male counterpart with equal human capital endowments and labor market experience, she would earn between 68 to 76 percent more than she currently does. Discrimination against women can also result in the concentration of men in topmost management positions. In 2013 the percentage of females who became top managers in the formal private sector was only 1.2 percent, compared with an average of 5.1 percent for the MENA region and 19 percent globally. 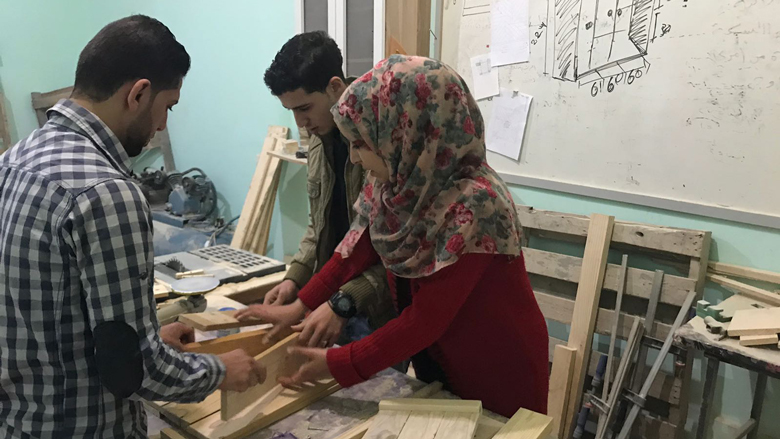 Aya and her staff at work in Basata Up Workshop

As the report notes, many of discriminatory practices against women lie in the absence of laws that can safeguard against implicit and explicit forms of discrimination. The law currently does not mandate equal pay for work of equal value, does not mandate nondiscrimination in hiring based on sex, and does not prohibit employers from asking about family status. Laws that require employers to fully cover maternity benefits, with no mandated paternal benefits, contribute to discouraging firms from hiring women.

Educated women also face limited opportunities. In 2015, 48 percent of educated women worked as teaching professionals, compared with only 15.2 percent of educated men, even as the unemployment rate for this profession reached 68 percent. Many women may indeed be interested in teaching but their concentration in certain fields reveal other barriers. These include lack of affordable and high-quality child care, no measures against sexual harassment in the workforce, as well as Israeli mobility restrictions and the lack of reliable transportation networks.

While entrepreneurship is not a silver bullet, investing in female innovators means more jobs for women in better positions – in the Palestinian territories and globally. Women owners tend to hire more women as employees and in leadership positions.

“For Norway, promotion of women’s rights and gender equality is and will continue to be a high priority, in general and in our cooperation here in the Palestinian territories,” says Hilde Haraldstad, Representative Office of Norway to the Palestinian Authority, “Despite the Palestinian Authority’s steps to advance women’s rights at the national level, it is difficult to see the impact and effective implementation of policy initiatives on the ground. New, targeted policies need to be adopted and implemented in order to enhance women’s participation in the work force.”

The World Bank is focusing on creating productive opportunities for women in the Palestinian territories by creating incentives for increased investments in women-owned enterprises, promoting e-work among Gazan youth with valuable work experience for better job opportunities in the future, and supporting formalization of home-based businesses typically preferred by women because of mobility constraints that are made more difficult in FCV contexts.

Ultimately, however, closing the gender gap in sustainable manner requires tackling all identified constraints in a comprehensive manner. This starts with an immediate reform of laws that do not treat women and men equally and with enforcing a discrimination-free environment surrounding employment in the private sector.