Thinking Equal in FSM: Myolynne’s Path as a Pacific Scholar 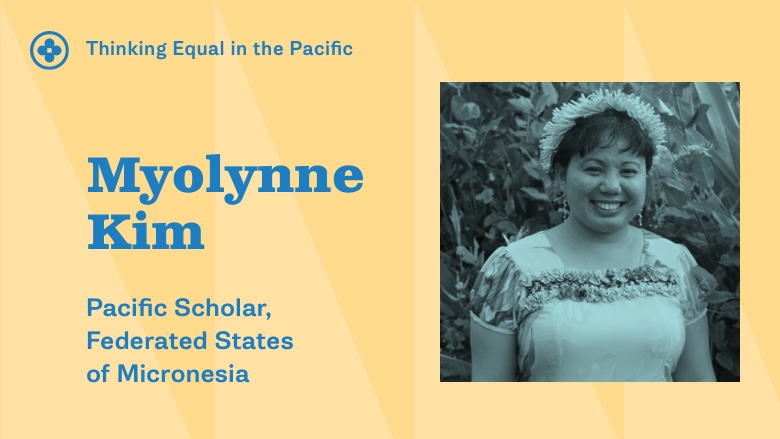 For International Women’s Day 2019, get to know some of the women driving change and increasing equality across the Pacific Islands and Papua New Guinea. Myjolynne Kim is a single mother, a PhD candidate and Pacific scholar who hails from Chuuk, in the Federated States of Micronesia and is working on history of Chuuk through women’s voices and stories.

I don’t consider myself a ‘gender’ person, but in attempts to decolonize Micronesian history, I realized that much of our written history is based on an old-fashioned, colonial, male-dominant lens that concentrated on men’s stories and perspectives.

How do you get people to discuss their oral histories?

I ended up setting aside the interview sheet and really engaged in a mentor-mentee setting. It’s almost like a talanoa process, but in Chuukese tradition it’s the concept of the noos or the learning mat, where we just tell stories and learn from each other.

In my Masters Degree I was focused on Micronesian history in the area of traditional warfare and violence, and the violent reputation Chuukese people obtained over centuries. But as I was studying that, I saw all these local histories of women with a totally different view to what was dominant. So I delved deeper into local history, and then I was exposed to these rich women’s history and the important role they played in their societies then.

As a woman living in the islands, I had worked on education reform, youth policy, gender and even cultural policy, but there were so many barriers due to gender and culture. But as a local woman I knew that a lot of us were using culture in a political way which could be disempowering for women. For example, we feed on a violent history of Chuuk because colonial histories tell us we are, and this violent culture endorses violence among young men. For many, domestic violence then became a problem. Learning more about local history and deep cultural values made me see some hope. I see local history as empowering women, men and therefore our Chuukese communities. This is what led me to gender focused history.

I’ve also worked in areas and been in meetings where men don’t give you the space simply because you are a woman, but in my family I was given the space to speak as a woman and I was told that women have a significant voice. To have policies implemented [that lead to greater equality] you need cultural validation – so for us to have women leaders you have to have a local history that not only proves but supports that women are entitled to leadership roles – that is important to increase women’s participation in leadership roles.

People say women are not in leadership positions because people say it is culturally disrespectful, but my narrative history is showing that is not the case. And that’s why it is so important to be critical of what has been written about us and who’s defining and writing our stories.

I would just say be open to opportunity; especially educational opportunities, as they don’t come up often. It is important to truly understand who you are, but also be open to what you learn outside your island cultures that can really foster inclusion and equity in your communities. Because that is a key to a healthy community. Women can influence positive change, it’s important to be responsibly influential.

What are the biggest issues in the Federated States of Micronesia right now, and how can they be addressed?

Inclusion, accessibility and equity. Problems here are due to political reasons and a lack of quality education; both cultural and formal education.

What drives you to work towards your goals?

My son, my nephews and nieces and the generation that is coming: I want my son to grow up in a healthy community, to experience equity and inclusion and to have a safe environment. I’m driven by this.

Sometimes I want to give up. But if did; who would do it? I can’t rely on others, I need to do it so that when I die, my son and others will have a good legacy and be able to live in a country where they feel they belong.

If you could use one word to describe women in FSM, what would it be?

Salient. Women hold the pillars in their homes, but they also hold their family and extended community together. Women are able to say, “my kids will have food on the table, my son or daughter will go to a good school.” These are the little things that really influence the greater society and government.

Also, in our culture we really listen to our parents. Sons listen to mothers. Moms have a strong influence on changing and shifting narratives, and with more educational opportunities they will be able to lead their communities and families into a more inclusive space.