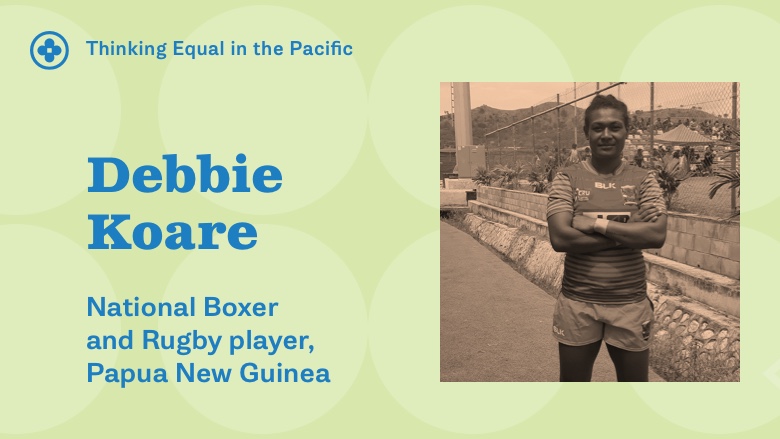 For International Women’s Day 2019, get to know some of the women driving change and increasing equality across the Pacific Islands and Papua New Guinea. Debbie Kaore is a boxer from West New Britain and Kairuku in Papua New Guinea. She is working to create opportunities for women in sport, particularly rugby union and boxing.

When I was 15, I found myself interested in boxing. It’s something that I am still passionate about and I love the sport. It has taught me to be tough, to defend myself, and has built my confidence to do anything. Coming from a country like ours, where women are told that they should stay home and clean the yard or go to the gardens, I know I am different.

In 2008, I decided to try out rugby union. My older sister Raphaela was playing rugby union and encouraged me to join for fun and I've stayed on seriously.

I have represented PNG in both rugby codes (league and union). In 2008, I did my debut for boxing in China for the International Boxing Association’s (AIBA) Women's World Championships. I was 19 then. Unfortunately, I lost in the quarter finals. In 2009, I took part in the Arafura Games and won my first silver medal, and also made my first debut in rugby union in Hong Kong where we won the Bowl. In 2010, I committed to rugby union sevens and captained the team a couple of times.

After taking time off to start a family (I am married with two beautiful sons, Antonio and George) I returned in 2015. My Dad really encouraged me to get back into boxing, believing I could compete in the Pacific Games. It brought me to tears, because I knew he was telling the truth. I trained hard and won Gold for PNG in the 2015 Pacific Games. After that I went back to rugby, captaining the team to New Zealand for the Oceania qualifiers in 2016, 2017, 2018 and 2019.

I want to be a strong healthy mum. I want my sons to see me as a role model as they grow up. I want to inspire young girls and women.

I have been an athlete and a coach at the same time, coaching young girls and mothers. I feel proud to see that women are trying to break barriers, coming out of their comfort zones and trying something new. Seeing that as a woman who can do this and seeing other women who are coming up and building their confidence, drives me so much. It doesn't matter what they choose to do, as long as they get out and do something.

What are your hopes for the future?

I hope to see PNG women one day lead this beautiful country of ours.

Do you have a favourite quote or saying?

“The first step towards getting somewhere is to decide that you are not going to stay where you are.”

What change would you like to see that could bring greater equality for women in Papua New Guinea?

I would like to see women educating their sons to respect women. If everyone can learn to respect each other, I believe there will be a change.

If you could use one word to describe women in the Pacific what would it be?

What about in Papua New Guinea?