Thinking Equal in Solomon Islands: Atenasi’s Path as a CEO 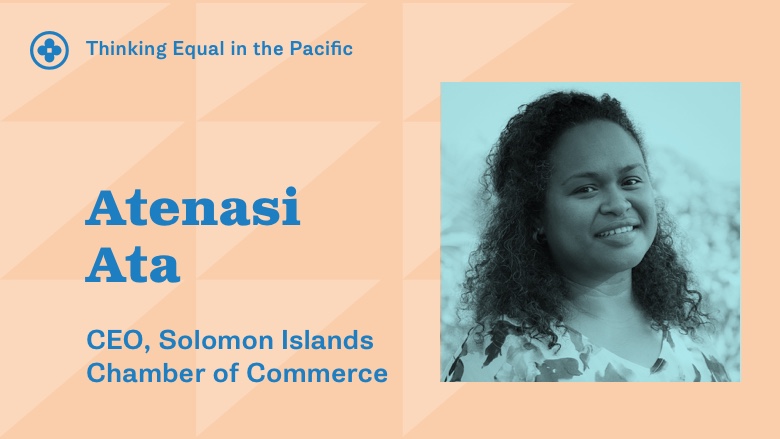 For International Women’s Day 2019, get to know some of the women driving change and increasing equality across the Pacific Islands and Papua New Guinea. Atenasi Ata is the CEO of Solomon Islands Chamber of Commerce and Industry. Atenasi has worked with aid programs, UN agencies and government strengthening initiatives in Solomon Islands and Kiribati. Meet Atenasi.

I am the CEO for the Solomon Islands Chamber of Commerce and Industry and I have been in the role for over 5 months. Before that I was studying for my Master in Law and Development from Melbourne Law School. My professional experience started with National Parliament as a Committee Secretary, after that I worked for 7 years with the Australian Government first within the Regional Assistance Mission to Solomon Islands and then within the bilateral aid program. I also worked with UN Women for three years before starting my master’s course.

In my 3 years with UN Women I managed the ending violence against women program, managing grants and funding for NGOs and government agencies here in Solomon Islands and in Vanuatu.

I have had a career spanning 14 years in Solomon Islands and in Kiribati.

With the Australian aid office I managed parts of the aid program including organizational development, and capacity building for government counterparts.

I think it was my time spent right out of university working with the national parliament office after the tensions [a period of civil conflict in Solomon Islands from 1998-2003] helping to rebuild government systems or trying to develop them – this was a UNDP project with Australian Government funding through the Parliamentary Strengthening Program.

I was in the graduate training program and I saw how much impact could be gained for a country’s democracy through systems strengthening of the legislature just by prioritizing the right things. This set me on the path to working to where I am today. I guess I was infected by the development bug from that time!

Go with your interests and passions.

For people with a development background transferring to the private sector, like I have with the Chamber, you may be hesitant and wonder if it is the right path. The important thing is to focus on the ‘why’ of what you are doing.

My goal is to see people in my country informed, engaged and invested in the future of the nation’s development with dignity and a high quality of life.

With the private sector, and especially working with an organization that represents industries, you can be an agent for change that directly impacts people’s lives. The important thing is to know the ‘why’ and you will be fine. That is my advice.

What are the biggest issues in Solomon Islands right now and how can they be addressed?

A lot of focus goes on Government and good governance ideals but I don’t get a sense that there is enough attention on the bureaucracy - I think that is one challenge - to ensure that ministries get the resources to implement the plans they have – as a private sector representative organization we keep seeing policies stated at high political levels that don’t get translated down to officer levels and therefore don’t get actioned. There is a disconnect between policy and action. I feel that the bureaucracy also has a role to play as arguing for cases in all possible ways whether through informal lobbying, Caucus presentations or Cabinet engagement.

Another thing private sector repeatedly comes up against is access to land as an issue – land large enough for establishing new businesses at a scale that will justify investment – such sized land is difficult to obtain as the majority of land here is owned through customary land ownership practices of tribes and communities.

In the absence of exploring options and of informed discussions, there is a feeling of distrust that has grown over the years, that is impacting opening up land whether for national infrastructure or setting up new industry and business in the country.

Where do you see Solomon Islands in 25 years?

In 25 years I hope to see land unlocked, especially for roads, and development more spread out throughout the country. Road infrastructure is so important to this vision. I would like to see road infrastructure connecting all the way around Guadalcanal and then replicated in the provinces, maybe next in Malaita, and then Isabel province and then the others.

What change would you like to see that could bring greater equality in Solomon Islands?

I think the quota system discussion [for female representation in Parliament] has hit some resistance and I don’t think we can address that with the standard language and rhetoric to the usual circles. I think as a country, we need to work hard at increasing visibility of women. Seeing more women and girls as administrators in schools, as community leaders, and just going beyond the roles normally associated with us is important. We are not just the sandwich makers during important community meetings, or the default scribe in those break-out discussion groups. We can be that yes, but we can be more.

If you could use one word to describe women in Solomon Islands, what would it be?

Determined – Women in Solomon Islands are determined and focused on improving the lives of their immediate family, they get on with it, they are hardworking, they are all about bettering their family’s lives.

**The Solomon Islands Chamber of Commerce worked with IFC, the International Finance Corporation – a sister organization to the World Bank - to set up the Waka Mere initiative, under which 15 of the largest companies in Solomon Islands have signed up to commitments to promote gender equality in the workplace.