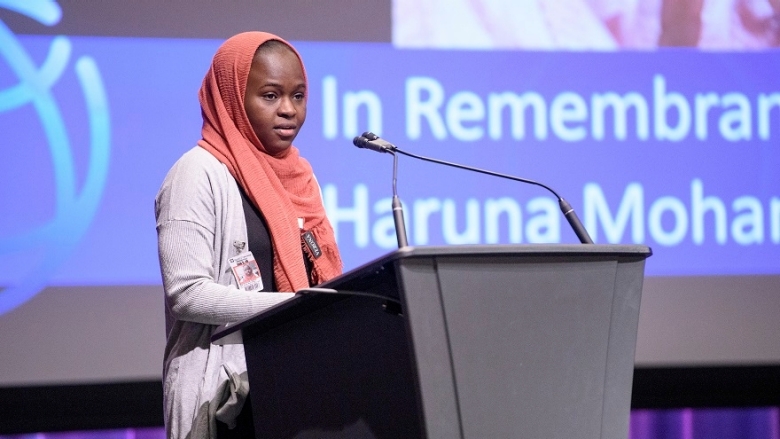 "A giant baobab tree has fallen.… (Haruna) always understood that progress happens when leadership was properly advised and given options."
Safina Mohammed

Hundreds of staffers gathered together last Tuesday in Washington and in Nigeria to celebrate the life of Executive Director Haruna Mohammed after his untimely passing on February 1st.

"A giant baobab tree has fallen," recalled Bongi Kunene, his immediate predecessor in EDS25, representing Angola, Nigeria and South Africa. "As a tried and tested civil servant, Haruna was resolute in his stance on development. He always understood that progress happens when leadership was properly advised and given options. His observations were therefore well considered and measured; only the unwise would choose to bypass his word."

A line of staffers waited patiently to sign the condolence book outside the Preston Auditorium, where the memorial service was held. The auditorium was packed with staff, including many from his native Nigeria, who came to pay their respects.

The memorial was opened by Yvonne Tsikata, Vice President and Corporate Secretary, Corporate Secretariat, who asked for a moment of silence to honor the ED. Tributes were offered by Interim President, Kristalina Georgieva, Alternate Executive Director, EDS 25, Armando Manuel, Co-Dean Herve de Villeroche and many others.

"Haruna was a simple, humble, quiet but deep and straightforward man," Manuel said. "He taught those who have worked with him over the years the act of true service and how to serve those in need without expecting anything in return."

Africa Region Vice President Hafez Ghanem worked with Haruna when he served as head of the World Bank's Nigeria office. He called Haruna a "great team player" who worked tirelessly on behalf of his country, including renegotiating Nigerian debt. He was "somebody who worked with his heart, with his brain, with a lot of energy."

Haruna was later seconded to the World Bank Africa Group, first as an advisor and later as a Senior Adviser serving until 2006. He was one of the major advocates to get the Board and Bank Management to approve strengthening African representation to 10 percent of total staff. One of his greatest achievement in 2004 was being co-author of the Voice Secondment Program to strengthen the capacity of country officials working with the ED offices.

He later returned to Nigeria, where he served as Deputy Director and later Director of the International Economic Relations Department of the Federal Ministry of Finance.

Richard Montgomery joined the Board as UK Executive Director three months ago and was pleased to find Haruna as his seatmate neighbor on the Board.  Montgomery previously had worked for the DFID UK office in Nigeria where he got to know Haruna well.

"He was a first-class civil servant. He always helped us and pulled out the stops to get things done," Montgomery said during the tributes. "He was a keen champion for Africa, not just Nigeria."

Haruna is survived by his wife, Inno, and their daughters Safiya and Safina, who gave an emotional speech remembering her father. Safina told the audience that her father urged her and her sister to "not just change the world but also change the lives of individuals."

She described her father as "fair, just, great, humble, straight-forward and supportive." Staffers wiped back tears listening to her moving tribute.

"There will be a different person in his office in a week, in a month. …That's just life," Safina told those assembled. "But there will never be another Haruna Mohammed. There is only one. This is a man who cannot be replaced."