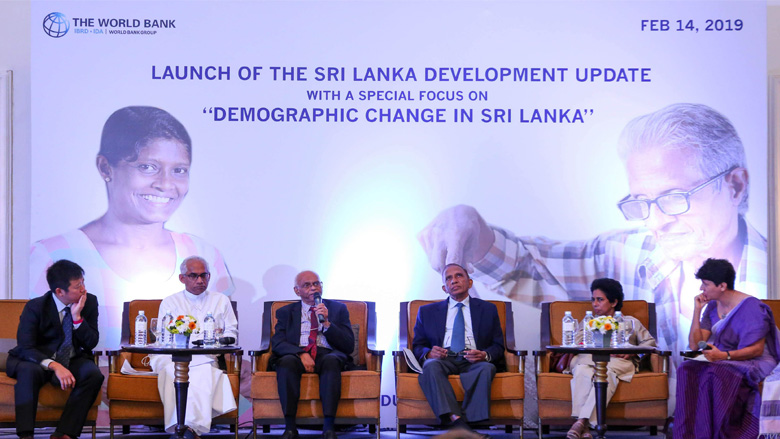 What happens when a population pyramid no longer resembles a pyramid so much as a rectangle?

Sri Lanka is confronting a profound demographic shift, due to falling fertility rates and rising life expectancy. The base of the population pyramid – consisting of young people – is shrinking, while the number of elders is growing. By 2050, it is projected that the proportion elderly (23 percent) will surpass that of the youth (17 percent).

“The pyramid is losing its shape,” said Fernando Im, an author of the Sri Lanka Development Update and the Senior Country Economist for Sri Lanka and Maldives, adding: “Compared to its peers, Sri Lanka has reached an advanced stage of this demographic transition.”

In a discussion recently held to mark the launch of the World Bank’s latest edition of the Sri Lanka Development Update (SLDU), . 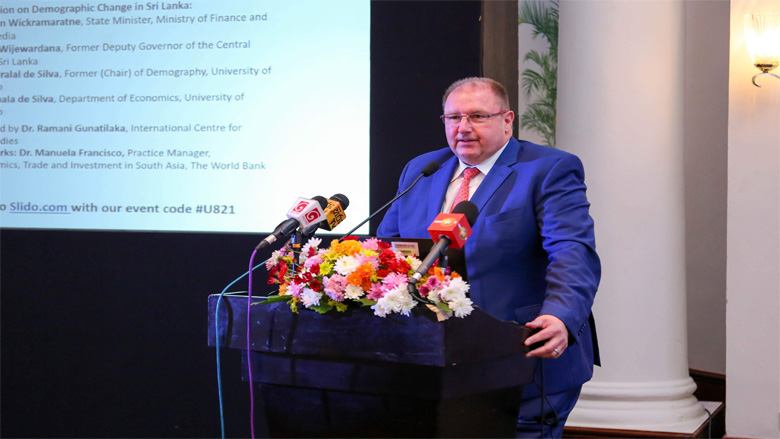 "Behind the strong economic growth, there are darkening skies because of debt dynamics, growing fiscal deficits and widening current account deficits. Should there be a global economic shock this growth is very fragile and we will need to have preventive measures in place,” Schafer said.

Dr. Ramani Gunatilaka, International Centre for Ethnic Studies, who moderated the conversation, shared her concern that Sri Lanka’s education system was “antiquated” and was doing little to prepare children for an increasingly digital world. “We are in the stone age in many ways,” she said.

Dr. W A Wijewardana, Former Deputy Governor of the Central Bank of Sri Lanka concurred: “Unfortunately, our current education system is concentrated on producing certificate holders,” emphasising that if Sri Lanka wanted to get back to a high economic growth path, it would have to produce the necessary human capital, equipping its citizens with skills in demand in the modern workplace.

The private sector also had a key role to play. While the “traditional private sector” could be declining, Hon. Eran Wickramaratne, State Minister, Ministry of Finance and Mass Media said that Sri Lanka was beginning to produce companies that were venturing into foreign markets and that this “new private sector” were pioneers, establishing Sri Lanka’s ability to innovate and compete internationally.

. This is even more relevant because Sri Lankan youth are joining the workforce later and staying longer. Measures to boost educational attainment and make the labor force more educated and skilled could increase labor productivity and help reverse the slowdown in growth coming from demographic factors.

Strengthening schools and universities could also help lighten the burden on parents, said Prof. Amala de Silva, Department of Economics, University of Colombo. Many women opted out of the workforce in order to raise their children, in part because the current system requires a lot of support with homework and additional tuition. If schools did their job better, more women could go to work.

This would have a domino effect, said Prof. de Silva, leading to job creation and boosting economic growth. It will prove a vital shift as only 40 percent of working-age women were either formally employed or looking for a job. In contrast, 80 percent of working-age men were in the labor force. With Sri Lanka’s population aging, this represents a significant loss to the workforce.

Prof. de Silva went on to highlight barriers to women in the workplace noting that few companies welcomed applicants over the age of 35, discouraging mothers from returning to work when their children had grown up.

The panel explored why cross-cutting reforms were desperately needed to address the issues presented by Sri Lanka’s demographic transition. .

Prof. Indralal de Silva, (Former) Chair of Demography, University of Colombo noted that as lifespans increased, it was worth reconsidering retirement guidelines. “A woman lives to about 79 years, while men live to about 73 years,” he said, noting that if people retired between the ages of 50 and 60, they could expect to live close to two decades without a salary.

As the SLDU reports, in some cases the average pay-out from the Employees Provident Fund might only yield an income of about Rs. 2,650 per month (below the poverty line) over a 23-year life expectancy at the retirement age of 55 for men and Rs. 2,130 per month for women, who can retire at 50 and have longer life expectancy.

This scenario is further complicated when you consider the informal sector, where government pension schemes exist but remain insufficient, affecting the estimated 61 percent of Sri Lankan workers who are employed informally.

The panel also touched on a critical issue of healthcare. “A major reform is underway, and we are coming to a paradigm shift that was very much needed,” said Prof. de Silva, adding that the growing burden of non-communicable diseases was a major concern.

Going forward, . As the SLDU notes, this would create jobs, improve quality of life of the elders, reduce the rate of hospitalization among the elderly, and support family members who care for the elderly.