The World Bank in Libya: Collaboration Despite Conflict 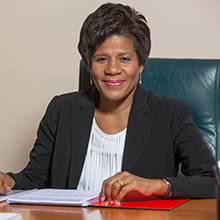 An interview with World Bank Country Director for the Maghreb and Malta, Marie Francoise Marie-Nelly.

The World Bank has been engaged with Libya for over a decade, helping to build capacities and modernize state institutions. The support began in 2006, three years after the lifting of international sanctions, but was interrupted by the start of the Libyan revolution in 2010. Two years later, the Bank returned to help Libya recover, lay the foundations for sustainable and inclusive growth, and build a new relationship between citizens and the state. The Bank established a permanent presence in the country but was again forced to evacuate its offices in 2014 due to rising insecurity. This time however, to preserve the strong relationships built with a diverse range of Libyan technical counterparts, innovative ways were found to keep collaborating. A close working relationship has been maintained ever since. With the Bank now preparing to expand its current engagement with Libya, Marie Francoise Marie-Nelly, World Bank Country Director for the Maghreb and Malta offers a perspective on the durability of the ongoing relationship, what has been achieved despite difficult circumstances, and a vision for the future.

What was the original focus of the World Bank’s engagement with Libya?

Marie Francoise (MF): I had not yet arrived in the region, but I learned from colleagues that our primary goal was to understand how the economy was being managed. After years of isolation and sanctions, this was not easy, but Bank teams engaged in a series of technical discussions with a range of ministries. The knowledge gained, and the relationships built then were extremely useful when we returned after the revolution to support recovery. The Bank teams also conducted a Public Expenditure Review (PER), which provided a good picture of how the government was managing its finances and key sectors such as transport, education, health and water. During this exercise, it became clear that there was no reliable source of statistics in Libya. Statistics are vital for informed decisions and setting policies. Much of our work following the revolution was with technical counterparts in the Ministry of Planning to train them on statistics. Eventually, the World Bank helped the new government establish a National Institute of Statistics. The Bank conducted an investment climate assessment in 2012, and a business survey in 2014; both of which relied on data from the Institute of Statistics.  More recently, as part of the preparations for our new country engagement strategy, we conducted extensive research on the health and education sectors, in preparation for engaging in these sectors to ensure Libyans have access to these critical services - and again, we relied on the Institute of Statistics. Without good statistics, you cannot understand the reality on the ground, and it is impossible to develop effective policies or programs of support.

How has the World Bank navigated the current complex security and political environment in Libya?

MF: When the World Bank left ahead of the revolution, we were unable to maintain contacts with our Libyan technical counterparts. This set back our work, and the World Bank vowed to find ways of maintaining relationships and staying focused on key issues.  When the World Bank had to withdraw in 2014, our teams came up with innovative solutions to continue working. This involved ‘reverse missions,’ where we convened our counterparts outside of Libya, in Tunisia or Turkey.  While the country was now politically divided, the World Bank made a proposal to all sides to continue our collaboration and continue working. All sides were clear in their desire to keep working, and the ‘reverse missions’ went ahead with representatives from both east and west.  Our current Libya Country Representative, Michael Schaeffer was part of these missions, and led the work on the management of the national budget, which was the priority. These missions were critical, as they allowed for the sharing of data between east and west. We managed this by treating both sides equally and not bringing politics into technical discussions. We have maintained an ‘All of Libya Approach’ ever since, and it has allowed us to build relationships and trust with a diverse range of constituencies in Libya.

What is the current focus of World Bank work in Libya?

MF: The World Bank leads the coalition of donors on economic recovery together with the Libyan Ministry of Planning.  In 2016, in line with our ‘All of Libya approach’, we established the Libyan Economic Dialogue, which brought together private sector representatives, non-governmental organizations, decision makers, parliamentarians and young people from across the country. These sessions are held in Tunisia and bring together around 35 people each time for open and constructive dialogue. The World Bank merely convenes and listens. The Libyan participants from both east and west work together to identify priorities. The most outstanding was the liquidity crisis, which is preventing people from taking their money out of the banks. The second is access to basic services such as electricity, education and health.  The World Bank had not really been involved in these sectors. As a result of the dialogues, we redirected our resources to focus on an extensive study of the electricity sector, to understand the reality on the ground and develop solutions. We did the same in health, together with the World Health Organization. With the United Nations’ Children Fund we launched an extensive survey to understand the impact of the current crisis on access to education. The evidence and data we gathered are the foundation for the activities in our new Country Engagement Note (CEN). The dialogues also served as a sounding board during the preparation of the CEN. Our team received valuable feedback from young people and women as well as government officials and a range of other stakeholders which informed the design of the CEN.

What role do you see for the Bank going forward?

It has long been clear that Libya’s economic and political challenges are aggravating and reinforcing each other. As Libyans work to resolve their political differences, our aim is to address the economic challenges that risk undermining that process. The new CEN has two primary goals of accelerating economic recovery and restoring basic services. Instability in Libya affects its neighbors, the region and ultimately the rest of the world. We are committed to stability in Libya as a global public good. We are also committed to the people of Libya who are now caught in limbo. Stabilizing the economy and helping to restore basic services could contribute to building trust between citizens and the state. This is where the World Bank can help and contribute to restoring peace and stability. We need to keep working on the liquidity crisis, and help the government show that they can fix the problem of basic services. With the data we have gathered, and the relationships we have built, we are in a position to work with all the institutions responsible for the key sectors of education, electricity and health. Our plan is to steadily rebuild our presence on the ground in Libya as conditions allow and our engagement expands. All our work will be guided by our ‘All of Libya Approach’ and this includes a special focus on young people, women and internally displaced people. Young people and women are sources of immense potential, with high levels of education, but are excluded from decision making and left with few prospects. The aim is to create the opportunities to leverage this potential with an inclusive economy driven by a dynamic private sector. With continued effort, Libya can be a stable, prosperous country.