In villages like Nabeina in Kiribati, sea-level rise not only threatens their shorelines but also the wells where they source fresh water for drinking, cooking, and washing. By installing a solar pump in the village, villagers were able to adapt to the challenge of saltwater intrusion and build resilience. With its Climate Adaptation Action Plan, the World Bank Group is elevating the climate adaptation agenda.

As the sun creeps above the horizon, Kaure Itipo walks from his coastal village to the solar-powered water pump on the other side of Nabeina, a tiny islet in North Tarawa, Kiribati.

Kaure inspects the parts and finds nothing out of order, then opens the well to check the water level inside. Satisfied that the system is ready thanks to the series of checks he learned from his elders, Kaure switches on the pump.

“I’m very happy to have this daily responsibility,” Kaure says, proudly reflecting on his volunteer role looking after the new pump. “This is the lifeline for my family and my community.”

Kiribati must adapt to climate change

Part of the World Bank’s Kiribati Adaptation Program, which recently wrapped-up its third phase, the new solar water pump in Nabeina draws from an underground water source to a raised water tank, with gravity then transporting the clean water down to three taps scattered around the Nabeina community, ensuring residents have 24-hour access to fresh drinking water close to their homes.

Straddling the equator in the middle of the Central Pacific Ocean, Kiribati is made up of 33 coral atolls spread across 3.5 million km² (1.3 square miles) of ocean the size of India. Most of Kiribati’s islands are just a few hundred meters wide and have an average height of 1.8 meters (six feet) above sea level, making the country one of the most vulnerable in the world to the effects of climate change and sea level rise.

Climate change related king tides and surges caused by storms in the Pacific Ocean can wash over entire islands, causing flooding for days and contaminating drinking water supplies for weeks and even months. With the entire population and the majority of infrastructure located on the coast, damage and coastal erosion from high tides, storm surges and salt water are increasingly becoming major issues for communities.

Yet even by Kiribati’s tough standards, the location of Nabeina village makes these challenges particularly difficult. While still part of the main island group of Kiribati, North Tarawa is only accessible by boat and remains largely subsistence-based; with residents gathering most of their food and water from their surroundings and using groundwater from shallow wells – that are easily contaminated – for all their cooking, drinking and farming needs.

"The water was brackish and salty and undrinkable; even after we tried to boil it. Our whole family was impacted, but our children were the most affected. They got diarrhea and vomiting every now and again." 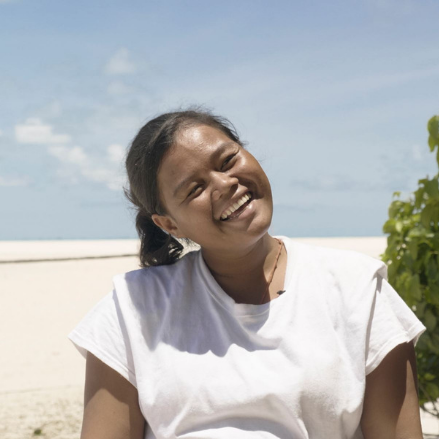 Kakua Tenoa Letio
25-year-old villager, who lives with her husband and two young children less than 50 meters from the shoreline. 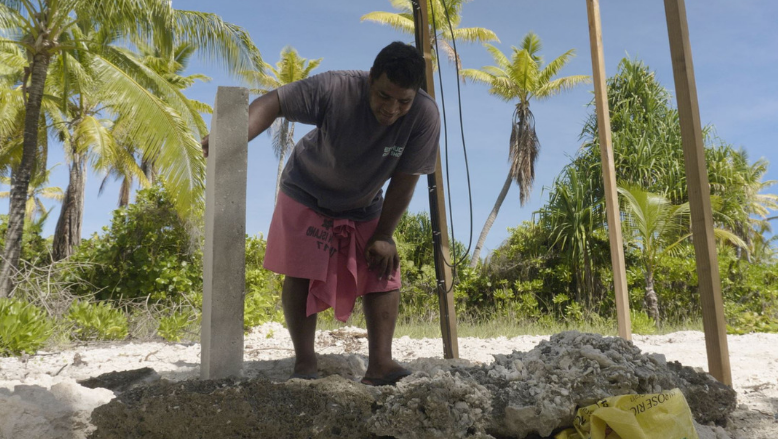 Kaure Itipo checks on the water level inside the community well.

Frustrated by this constant battle, the Nabeina community put together an application – ultimately successful – for funding support for resilience projects through the World Bank-funded Kiribati Adaptation Program.

Kakua now lives close to one of the new taps and says that today she says she is ‘worry-free’.

“When we heard the announcement in the village about the solar pump project, we knew our lives would improve. And since the water pump was installed in our village, we hardly ever get sick anymore,” says Kakua.

The focus of the third phase of the program has been to improve Kiribati’s climate resilience, particularly for freshwater supplies and coastal infrastructure. Initiatives include piloting the first 24/7 pressurized water supply for thousands in South Tarawa, increasing sustainable yield from rainwater harvesting and underground sources, and building strong community involvement to ensure water conservation and coastal protection.

For the community of Nabeina, with water now much closer to their homes, there is more time to focus on other activities, including coastal rehabilitation through mangrove planting or simply enjoying time with family.

“The community are now more conscious of what they should do to improve their living situation,” says Kakua, reflecting on the changes she had witnessed following the program’s support to her village. “We must revive the spirit of dedication and hard work to face inevitable changes and influences.”

The Kiribati Adaptation Program and its activities were led by the Government of Kiribati, and supported through the Governments of Australia, Japan, as well as the Global Environment Facility and the Global Facility for Disaster Reduction and Recovery.