Building Regulations for Resilience in Kenya

In Kenya, poor populations are disproportionately harmed by natural disasters such as floods, as well as chronic risks, including recurring smaller-scale events like fires and spontaneous collapse. Unregulated settlements, which make up approximately 70 percent of Kenya’s cities, are often located in areas prone to such hazards and their informally constructed houses tend to be highly vulnerable to climate and disaster risk.  This is exacerbated by the fact that extreme weather-related hazards are becoming the “new normal” across the region.

To address this challenge, the government of Kenya is striving to put in place appropriate legislation, policies and strategies to increase the resilience and safety of the built environment. Well-designed and locally specific building regulations are central to this effort: building regulations translate safe practices for design and construction into a set of rules and laws which govern and specify minimum agreed levels of safety and resilience for buildings.

The Global Facility for Disaster Reduction and Recovery (GFDRR) and the World Bank are supporting the government of Kenya in strengthening its disaster risk management framework. This support includes a $200 million World Bank disaster risk management financing package with a catastrophe deferred drawdown option (Cat DDO), which provides immediate liquidity if the country declares a state of emergency after a natural disaster. Part of this project focuses on strengthening building regulations within Kenya to reduce the underlying risk in the built environment.

“With the support of the World Bank and GFDRR, Kenya is moving quickly to ensure buildings are reliable, liveable and safe, even when disasters strike. No more lives should be lost in Kenya due to the collapse of buildings,” said Moses Nyakiongora, Secretary of the National Building Inspectorate, Ministry of Infrastructure, Transport, Housing, Urban Development and Public Works.

On January 24, 2019, the government of Kenya hosted a workshop in Nairobi focused on strengthening building regulation and land use reform. The workshop was led by the Ministry of Infrastructure, Transport, Housing, Urban Development and Public Works and facilitated by the World Bank. Over 50 government representatives attended the workshop and participated in lively discussions.

“Natural disasters affect many lives, assets and cities – cities that we have worked hard to build over decades. Resilient buildings and cities are an important foundation for livelihoods and economic growth, said Hirotaka Ishikawa, First Secretary, Embassy of Japan in Kenya, during his opening remarks at the workshop.

Photo Right: Mr. Moses Nyakiongora (Secretary of the National Building Inspectorate) Outlining the Importance of this Agenda and the Government’s Progress to Date. (Source: World Bank/GFDRR)

The workshop was an opportunity to present and discuss the results of the Kenya Building Regulatory Capacity Assessment (BRCA) and identify priority areas for building regulatory reform. The BRCA was conducted by the World Bank and GFDRR Building Regulation for Resilience Program and drew on the insights of over 100 stakeholders in Kenya from the public sector, private sector and academia.

The assessment provides an in-depth examination of the laws, policies, regulations and local implementation mechanisms in place to administer building and land use regulations and provides an analytical base from which to launch building regulatory reform. The assessment was supported by the Japan-World Bank Program for Mainstreaming Disaster Risk Management in Developing Countries, administered by GFDRR.

Based on the assessment and outcomes of the workshop, over the next three years, the World Bank and GFDRR will provide targeted technical assistance to support the government of Kenya in this important agenda.

Here are some of the main takeaways from the workshop:

Urbanization is resulting in the rapid accumulation of risk

The country is at a relatively early stage of urbanization, with around 27 percent of Kenyans living in urban areas, yet projections suggest that by 2050, about half the population will be living in cities. This urbanization has the potential to improve economic opportunities and living conditions for all Kenyans. 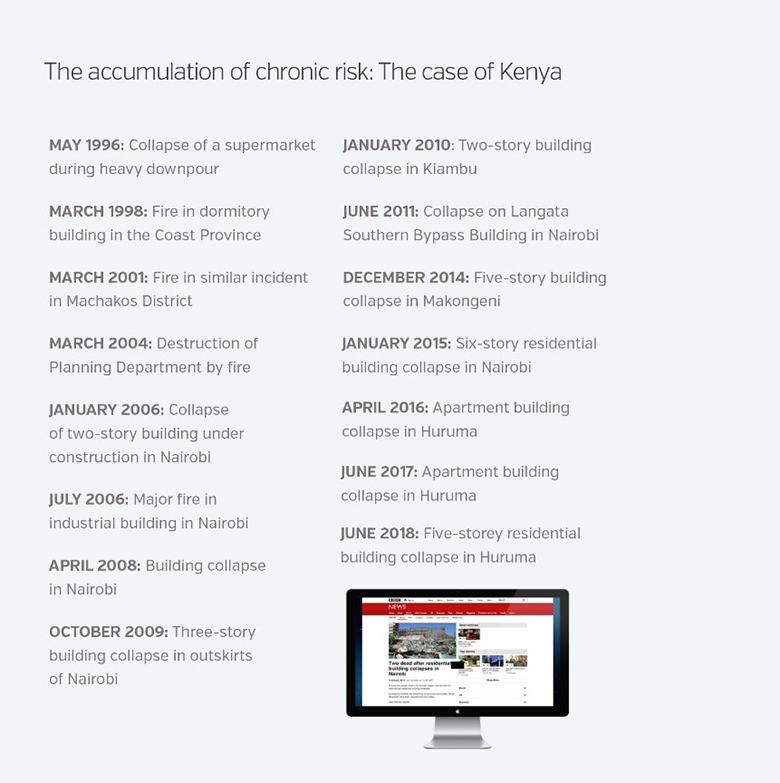 However, there are also several challenges associated with this shift and concentration of population. With urbanization comes a substantial amount of new construction, much of which has occurred in cities with limited capacity to ensure the structures in which people live, work, and gather are safely sited and built to withstand both chronic stresses and disaster shocks.

“Increasing assets and populations in cities and towns will result in increased exposure and vulnerability to disaster impacts. This rapid, unplanned urbanization is a driver of risk,” explained Felipe Jaramillo, Kenya Country Director for the World Bank.

The lack of effective building and land use regulation in Kenya has led to an expansion of disaster and chronic risks in the built environment.  In many ways, the country is at a crossroads. The regulatory decisions made now will have a significant impact on the long-term safety, productivity and resilience of the urban built environment.

Photo Right: Lee Kinyanjui, Governor of Nakuru County and Chair of the Council of Governors Urban Committee Commenting on the Role of Local government in ensuring a Culture of Safe Construction (Photo Credit: World Bank/GFDRR)

Investing in regulatory capacity can also support other societal objectives such as: accessibility for people with disabilities; climate change mitigation, through resource-efficient buildings; climate change adaptation; and, affordable housing.

As Kenya embarks on this effort, building regulations should be designed in a way that recognizes and promotes resilient forms of local, vernacular and incremental construction. This approach would help lower the cost of regulatory compliance and build on existing building skills and traditions in Kenya. Safe and affordable housing can be promoted through the recognition of local building materials and products and through lowering the costs and uncertainty associated with building permits and inspections.

Furthermore, ensuring that the investment made in housing, either by a public or private investor, results in a safe and resilient structure helps to mitigate against potential future damage and losses. A 2005 study funded by the U.S. Federal Emergency Management Agency (FEMA) and conducted by the U.S. National Institute of Building Sciences’ Multi-Hazard Mitigation Council found that every dollar spent on mitigation would save four dollars in losses.

Regulation of the building industry is critical for investors

An efficient regulatory process for land use and construction is also an incentive for economic investment and can contribute to the competitiveness of the economy. For building owners, occupants, investors, insurance providers, elected officials and citizens, enforced, updated building and land use regulations establish a baseline for acceptable and cost-effective quality and performance.

When an investor is weighing up the risk-involved in an investment opportunity, alongside political stability and currency fluctuation, effective building regulation is a key consideration. A well-functioning building regulatory framework provides investors, particularly long-term investors, with the confidence that the physical asset they invest in will be stable, safe and resilient, including to future climate shocks, thus reducing potential future loss.

“Enforcing building regulations effectively provides an environment of predictability for investors. I am keen to work with the World Bank and Council of Governors to help create a culture of safe construction,” said Lee Kinyanjui, Governor of Nakuru County and Chair of the Council of Governors Urban Committee.

Against the backdrop of intensifying climate and disaster risk and rapid urbanization, Kenya is facing up to this reality and stepping up its efforts to build a safe, strong and resilient built environment. Putting in place a strong and effective building regulatory framework will undoubtedly be critical in that endeavor – and ultimately help pave the way for a resilient future for the citizens of Kenya.