Skip to Main Navigation
This page in:_
FEATURE STORY December 12, 2018

Grodno’s Residents Waste No Time Recycling to Improve their City

As standards of living improve in Belarus, cities are grappling with how to cope with increasing amounts of solid waste. With World Bank support, the city of Grodno has found a solution, setting the stage for further improvements in waste management nationwide.

“This is all money, real money,” says Vyacheslav Andreevsky, Director of the Materials Recovery Facility in the city of Grodno, as he points toward huge piles of recyclable materials. “These secondary material resources – if our plant didn’t exist – would have been buried in the landfill. Now they work and bring in money!”

The Grodno landfill, which opened in 2004, was almost 85% full by 2016. Therefore, to slow down its expansion, a new 120,000 ton-per-year modern mechanical waste separation plant was built, with support from the World Bank’s Integrated Solid Waste Management Project. 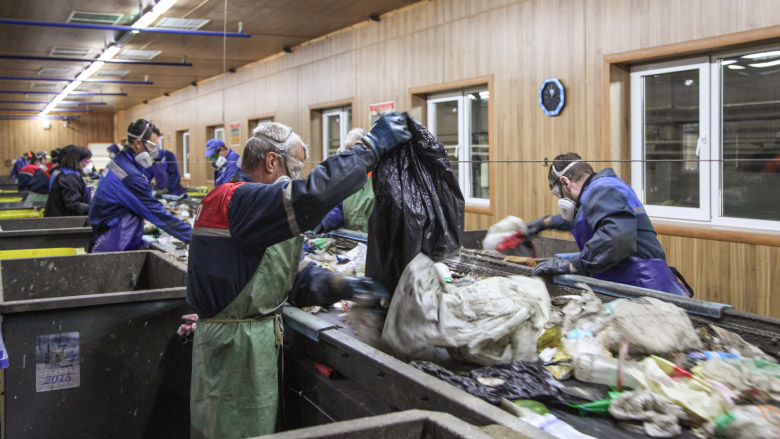 The waste separation plant employs 192 people. On average, they sort about 230 tons of waste a day.

The new plant enabled the city to start recycling waste instead of burying it all in the landfill. This in turn helped reduce environmental pollution and risks to public health in Grodno. Moreover, recycling has made economic sense: about 230-280 tons of garbage are brought to the facility every day, out of which 12 tons of recyclable materials are recovered.

“We sell the remaining sorted products to various Belarusian organizations. Trust me – we have an interest in this,” states Vyacheslav. “All employees have an incentive to extract as much recyclable material as possible. The more we sell, the more we earn. Since the plant’s launch in December 2016, the average wage has grown almost fourfold – from 175 to 600 rubles a month (approximately US$ 85 to US$ 300).” 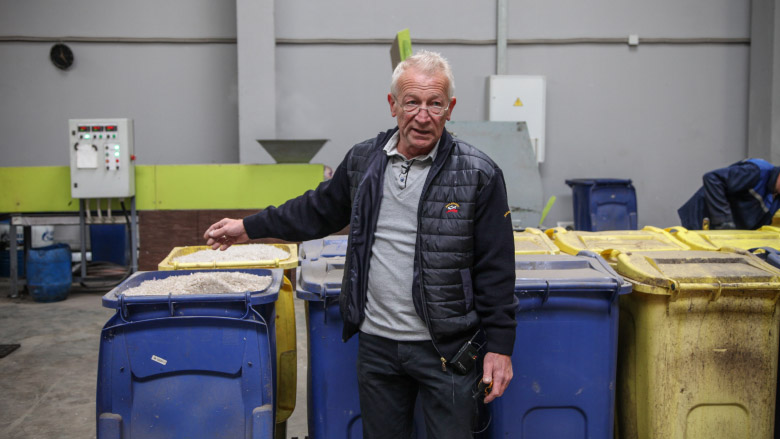 Vyacheslav Andreevsky, Director of the Materials Recovery Facility in the city of Grodno, is always seeking for innovative ways of using waste.

In addition to selling recycled materials, the plant has come up with innovative ways of using the waste. For example, wooden bulky waste – sleepers or old furniture – is shredded and used to heat buildings. The plant also produces paving slabs and parking tiles out of plastic wrap and sand. 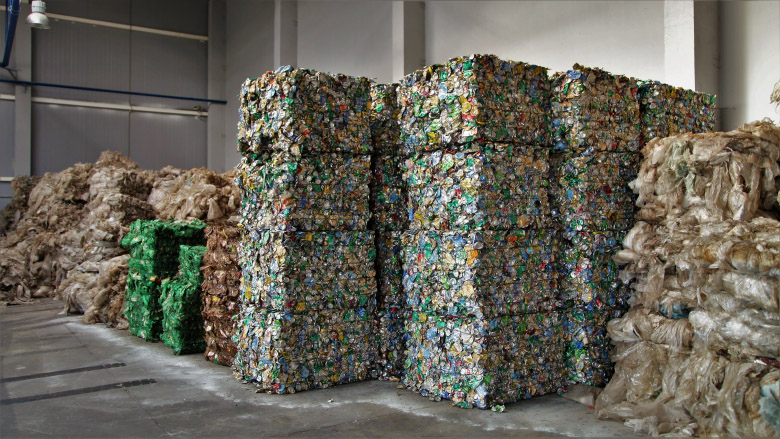 Sorted products are sold to various Belarusian organizations. The most demanded recyclable item is PET bottles – it costs around 330 euros per ton.

Vyacheslav has noticed that more and more separated waste is being brought to the facility every month. “We were supposed to open the third shift on separately collected raw materials on July 1, 2017,” he says. “But we opened it two weeks earlier, because no one expected – either in the city or here at the facility – that from the very beginning, Grodno’s citizens would be so proactive regarding the
idea of sorting.” 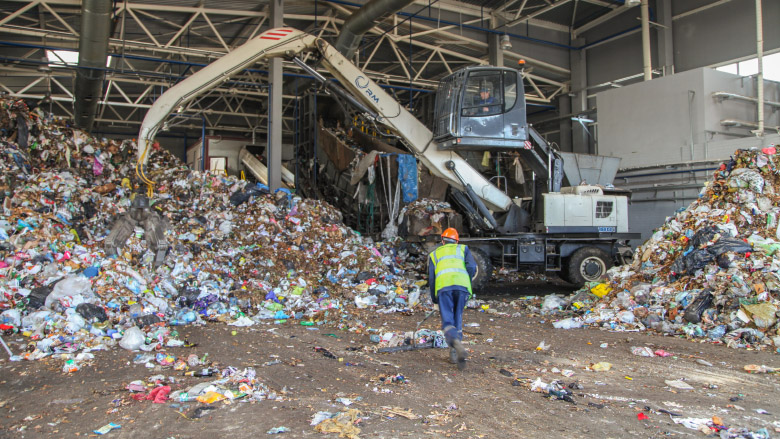 Grodno produces 160,000 tons of waste every year. Before the plant’s launch in December 2016, all waste was buried in the ground at landfills.

A New Way to Manage Waste

The new waste separation plant has changed the way waste is managed in Grodno. The city authorities have replaced waste chutes in apartment buildings with more than 30,000 new containers in courtyards for separated and mixed waste.

“I can’t say that we welded the waste chutes very quickly,” says Pavel Konev, Head of Production and the Technical Department of Grodno City Housing and Communal Services. “The last 2,500 waste chutes were welded shut in two weeks, while it literally took two years to weld the first 300 waste chutes.” 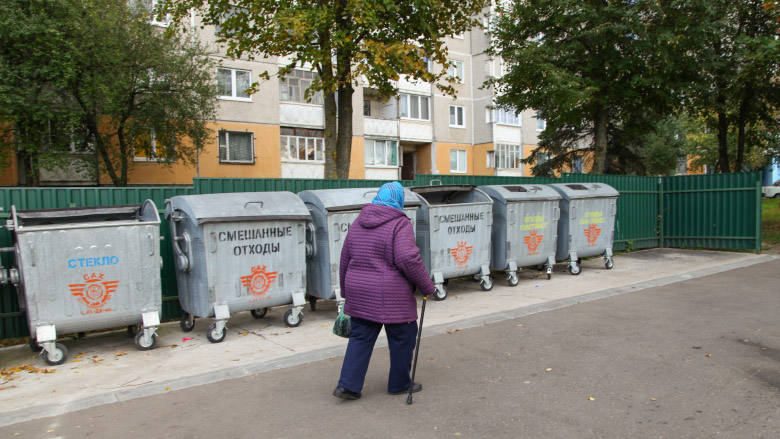 Within a record two-month period, thousands of new containers for separated and mixed waste were placed all around Grodno.

Waste chutes in apartment blocks are often associated with poor sanitation, nasty smells and flies. Regardless, many residents were disgruntled when the city authorities announced that waste chutes would be welded shut. A few people even dumped bags with garbage by the front door of their building.

“Some people didn’t feel like going the extra distance to take out their garbage, especially in the winter time when there’s slippery ice,” says Pavel. “But, over time, everything has worked out. And now, many people are grateful to us for closing the garbage chutes. We aimed to put all container sites as close as possible to apartment buildings to make it convenient for people.”

On display around Grodno these days are many large, bright billboards promoting separate waste collection – all part of a public communications campaign to get more people involved in waste separation. In addition to the ads, the campaign has involved more than 400 community meetings, TV and other media information programs, and theater performances at schools and children’s summer camps.

Following the public information campaign, many of Grodno’s residents have become more active in sorting their garbage at home.

“I don’t have the heart to throw everything in one litter basket,” says Olga Kremleva. “Perhaps because I know what will happen next with this waste.” 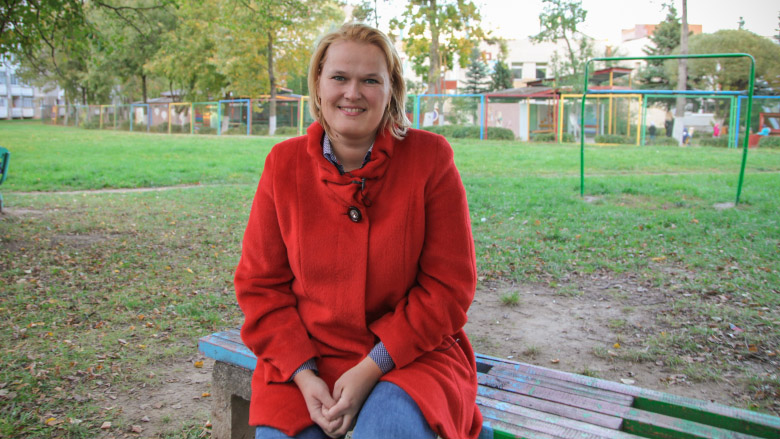 Olga Kremleva has started sorting waste at home a long ago – and now she can’t even tell why.

Olga collects recyclable materials in the small room where the waste chute used to be in her apartment building. Following her example, Olga’s neighbors – with whom she shares the entrance hall – also started sorting waste. And now they even have a rota for taking out the litter container.

“More and more people are becoming conscious about reusing materials, but it takes time,” says Olga. “Breaking habits is very difficult, especially for adults. That’s why I think the solution is to work with the younger generation.”

Olga no longer hears any complaints from her neighbors about the new waste management system.

“Welding shut garbage chutes is the first step in changing people’s mindsets about the use of resources. This is just the beginning of a long, painful and dirty path towards something cleaner, brighter and more equitable,” she says with a smile.