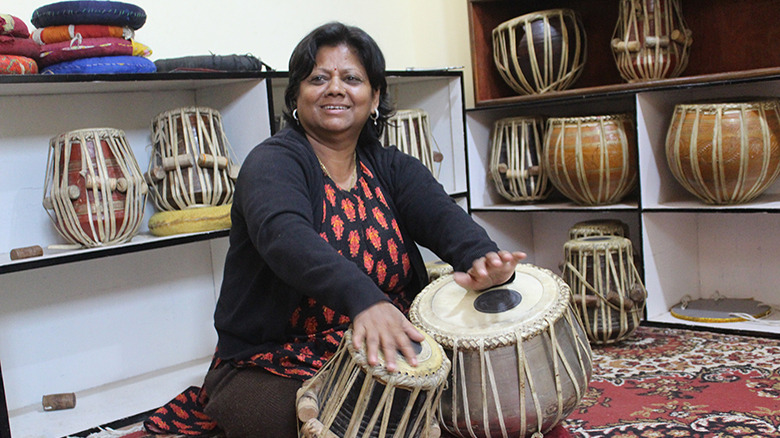 Sarita Mishra’s love for music came from her upbringing in a musical family. Born and raised near the Pashupatinath temple in Kathmandu, she recounted the bhajans and kirtans, religious songs and hymns that were sung at her home almost every day. She stayed up late with her parents whenever there were visitors from India during Shivratri, with the family having musical sermons, bhajans and Sufi song sessions. Sarita remembered trying to play the tabla when she was very young, and when she was six years old, her father hired a renowned tabla player, Guru Homnath Upadhyaya, as her tutor.

It wasn’t easy to teach a daughter to play the tabla in a society where girls and women were not supposed to step out of the house. Learning to play the tabla or any other music was unthinkable. “It was a scandalous concept but my father was very liberal,” she says. “He maintained, ‘I will let my daughter do whatever she wants’, and ended all protests from our community."

Sarita later joined a musical school were was she the only female student among 72 male students. That didn’t discourage her from pursuing her fascination for music. “I never felt inferior because I was a woman,” she recalls. “It’s not that there was never any discouragement, but I never let that feeling get to me. I was focused on my goals, and my passion for music spoke volumes which silenced critics.”

She completed her Masters degree in Music from Allahabad, India where she recounts giving flawless performances to audiences. Whenever she played, she believed that the audience forgot that it was a woman playing the tabla. "Music does not discriminate between male and female. It is the mindset of the people,” Sarita says. She also adds that media gave her recognition as ‘only female tabla player' in Nepal.

Wanting to make a difference

Sarita recalled incidents that helped her realise that she wanted to make a difference to children who were living troubled lives. She saw many cases where parents expressed hopelessness at the trauma their children faced. “The reality hit me hard,” Sarita says, “So I thought that providing them some musical skills and treating their trauma through musical therapy could bring about a positive change in their lives.”

She shared her idea of helping children who were orphans, conflict-affected or affected by other kinds of trauma, and to build their self-esteem and confidence through music. With funding support from Dr Rita Thapa, then chairperson of the South Asia Foundation-Nepal, Sarita established a musical school which would provide free education for 20 students. Sarita also received support from various organisations including Action Aid, Ncell and the Sikchya Foundation, which helped cover the salaries of the 10 teachers and providing musical instruments for students.

Since Sarita established Naad Sangeet Pathshala (Naad Music School) 11 years ago, a total of 600 students have graduated from there. Currently, 82 girls and 82 boys aged six to 16 are enrolled at her school, of which 100 are orphans. The students mostly live in Maiti Nepal, which provides shelter to women who were trafficked, in Shanti Bidhya Griha, an orphanage, or in houses close to the school. The students learn nine instruments – the tabla, harmonium, keyboard, violin, sitar, guitar, maadal (a Nepalese percussion drum), flute, vocal and undertake dance.

Sarita says that the school has been successful in increasing the confidence and self-esteem of students through musical skills. The students have performed in various national concerts. Her former students have become doctors, teachers, and established music professionals, and graduates continue to volunteer at the school and provide guidance and support to the students.

“Through music they found a purpose in life,” Sarita says. “Most of my students still say that this school helped them find their identity and to focus on their life goals. They say that they cannot imagine their life if they had not gone to the school.” She adds, “It is satisfying to see that these young children will find a life for themselves with these skills. The smiles on their faces and confidence that they have is my biggest award.”

" I was focused on my goals, and my passion for music spoke volumes which silenced critics."
Sarita Mishra
Tabla Player
Api