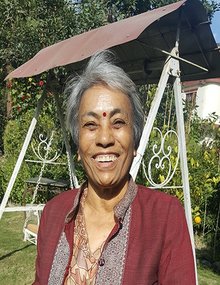 Shyam Badan faced difficulties before the time she was born. Her father died from malaria whilst Shyam’s mother was pregnant with her, and later that year Shyam’s uncle also died. When she was born, Shyam was not allowed to be brought to her father’s home and instead grew up in her mother’s home. She later experienced struggles with language in school when she went to study in Grade 6 in Janakpur where her uncle was based. She only spoke Newari, whilst all the students spoke Nepali and the mode of instruction was Hindi. Although she found it challenging, she was able to learn Nepali and Hindi.

Shyam was responsible for earning money by sewing ‘topis’ (Nepali caps), waking up at 2am each day to sew, before she left for school. It was as a very difficult time for her and her single mother, who were called names and harassed due to their poverty. As Shyam was the only girl in her family, and in her community, who went to school, her mother was mocked for 'sending her daughter to school' to be a ‘bad woman’. “I was shocked and humiliated when my male relatives called me names,” recalls Shyam. “I cried but promised myself that I would achieve highest of education.”

Shyam was good at studies and passed her School Leaving Certificate (SLC) exams. When she learnt that the College of Education in Kathmandu would provide Rs. 55 ($ 1=NRs. 113) a month as a stipend to study Intermediate in Education, she applied. She considers that opportunity life-changing, as it enabled her to concentrate on her education without worrying about earning money. She completed her Bachelors of Education, majoring in Science, and obtained a job working in Nandi Ashram School where her monthly salary was NRs. 275.

She later completed Masters degree in Nepali. She gives credit to the dedication of her teacher and her friends in Janakpur who helped her learn Nepali. “I learned that love can be a strong source of inspiration,” she says.

In 1973, Shyam obtained a position as a science teacher at Budhanilkantha School, considered to be Nepal’s most reputable institution. She taught there for 10 years, and many of her students have today become leaders in their respective fields. “Then came a turning point in my life and I quit school to start something on my own,” Shyam shares. As she had three small children to raise, she started to use her knitting and weaving skills to earn a living.

Shyam considered that it would be effective to teach women knitting and embroidery from which they could earn a living. She trainied 50 women for six months and also provided them with marketing skills to help sell their goods.

With financial support from her husband, she continued to learn new techniques and designs. When she observed an increase in the number of orders for her goods, she decided to register a company. She slowly expanded her business by teaching women new techniques and in 1987 became one of the founders of Women Entrepreneurs Association of Nepal (WEAN). In 1990, she faced a major setback when she was unable to import raw materials needed to produce her products, due to a trade embargo.

To address the difficulty with importing raw materials, Shyam started to explore using raw materials within the Nepal and was successful in using maize husk for creating ‘Nepali dolls’. The dolls instantly gained popularity in the global market. She then further expanded her market into creating weave bamboo baskets, blinds and floor mats. She researched the qualities of raw material in plants such as its strengths and durability. She discovered a new market where the ethnic identity of Nepal had not been studied and where those skills, which are close to extinction, could be preserved.

An empowered woman empowers a society

Shyam believes that if a woman is financially empowered then she will be able to empower the whole of society. “Women who were too scared to move out of their house are now financially sustaining their family,” Shyam says.

She has now trained hundreds of women and has established women’s groups in nine districts who distribute her products. Further, WEAN has now become a federation and has a presence in 29 districts across Nepal with 100 female members.

"I promised myself that I would achieve highest of education."
Shyam Badan Shrestha
Entrepreneur
Api