Bringing Hope to the Lives of Visually-Impaired Children 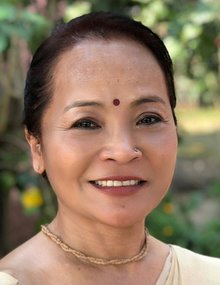 When Keshari Thapa accepted an appointment to be the principal for a school for visually-impaired students for six months, she never thought that she would end up spending 25 years of her life at the school. Keshari retired from Purbanchal Gyan Chakshu High School in Dharan of Eastern Nepal two months ago.

Keshari has dedicated her life to the visually-impaired students, leaving behind her family in Kathmandu to move to Eastern Nepal to reside with students at the school. A total of 550 students passed through the school during her tenure.

She believes that she has changed the lives of many of her students, and it is evident that she had a strong commitment to improving their welfare. Clearly emotional about the family and societal treatment of many of her students, she shares, “The treatment they receive from their family is heart rending. Imagine how they must feel when their parents do not come to take them home during a month-long vacation.

For Keshari, her biggest achievement was being able to convince parents that their children were not a burden and ensure that they felt loved at home. The children also learnt to believe in themselves and most have been able to go on to manage their lives well. Keshari muses, “They are living a respectful life, some are in business while others have become teachers.”

Keshari still recalls one incident 25 years ago, from a cold winter morning. She had just joined the school and students had not returned from their homes after a long vacation. She saw a six-year-old blind girl gloomily crouching at a corner. She stayed in that position for a long time and refused to eat. Keshari learnt that the girl was sexually assaulted by a senior boy from the same school for a month when their parents did not come to pick them up. “The girls were always at the receiving end. In the past, the school would ask the parents of the girl to take their daughter home while the perpetrator was left unpunished,” she says. “I put an end to that and took immediate action against perpetrators for any kind of sexual harassment and exploitation.”

No matter how much she tried to protect them at school, the children were not safe inside or outside their homes. She discovered later that some children were made to beg in local fairs and markets. Happier with her presence at school, mothers would request her to allow their daughters to stay at school even during the vacation, because they feared that they might not be able to protect them from their own fathers and relatives. “What could we do when the girls were not safe at homes? There were no one at the school during vacations and we could not take on the responsibility of the children,” says Keshari. “Parents started reaching out to me and I told them to raise these issues with the appropriate authority.”

Raising awareness about sexual harassment and rape to the parents helped them speak up against any kind of violence towards their children, which she believes is a huge achievement. She upgraded her school up to the School Leaving Certificate level, improved the teaching methodology, started programs for low-vision blind students and special educational programs for children with multiple and visible disabilities, and installed an audio and science laboratory.

Connecting with the children

Keshari considers that her own adolescence, which involved periods of long separation from her family and living alone in new environments, has helped her connect with the children. Keshari was born in Malaysia where her father, a British army official, was deputed, and she grew up in Singapore and Hong Kong. Her father’s retirement brought her back to a remote village of Tanahu district in Western Nepal. Keshari’s move from a modern city to a remote village with no basic facilities such as roads and electricity nor a school, was a shock to her. Her mother insisted that Keshari still be sent to school. So Keshari was sent to a school about 5-6 hours walk from her village, and stayed with a relative who lived near her school.

In school, she remembered being mocked for how she was dressed, which was different to the other students. Because of these experiences, Keshari could connect with the visually-impaired students in her school. “I could relate to their situation, anger, frustration and helplessness,” she says. “Maybe by wanting to help them, I want to help myself.”

Even after her retirement, she has not given up on the children. She has now become a team leader in The Rose Fund for Children, an INGO which helps to improve the lives of children, particularly those with disabilities.

"I took immediate action against perpetrators for any kind of sexual harassment and exploitation in my school."
Keshari Thapa
Educationist
Api