The Fight for Women’s Justice in Solomon Islands: Jennifer’s story

Matangi, October 2018 – The finals are today and the Matangi under-20 girl’s netball team is running through training drills. Their coach, Jennifer Tai, laughs as slippery hands sometimes fumble the ball, but you can tell she is serious about this last practice.

But this is a side project for the coach. Jennifer’s main focus is off the court, addressing community problems and supporting justice in her small rural community of Matangi on Bellona Island, in the remote south of the Solomon Islands.

In this male-dominated culture, Jennifer has become a rock of stability for her local community, helping to settle and refer land disputes, addressing domestic violence issues and speaking with youth about the challenges they face.

Jennifer’s community voted to have her as their Community Officer as part of the Solomon Island’s government Community Governance and Grievance Management Program. The World Bank and Australian government sponsored program was established to help create a first line of contact for people in rural and remote communities to resolve disturbances and seek justice for crimes.

Considering the distance from provincial police posts and the difficulty of providing state services in a country that sits across nearly 1,000 islands, addressing community grievances can be incredibly difficult.

Crucially, Community Officers come directly from within the communities. They are the cousins, teachers, friends and neighbors of the people they support. They work in the villages in which they live to solve community disputes and direct problems to relevant state authorities if other solutions can’t be found.

"My work here as a Community Officer means I must be aware of anything that comes up – crime, land disputes, all types of issues. I have to listen out for what is happening and then act as a mediator, sometimes working in different areas to support the government like emergency supply distribution"
Jennifer Tai
Community Officer 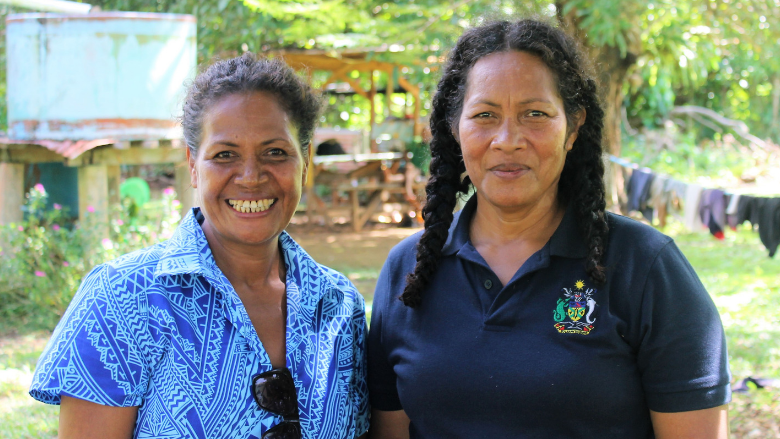 Rosita Morsley, Matangi Women’s Association, and Community Officer Jennifer Tai (right) are working together to solve issues in their community

However, there have been plenty of challenges. As the only female officer in the entire province, Jennifer had to overcome prejudices, as well as her own fears and misgivings about the role.

“I was frightened when I started, because in our culture it’s hard as a woman to talk openly with everyone in the community, especially with [male] elders and chiefs,” says Jennifer.  “But after I received training to become a Community Officer, I gained confidence, and now I’m not as worried as before.”

Women have a central role to play

Chiefs and elders have, largely embraced the role of a woman Community Officer. The Chief of East Bellona, Matangi and the Chairman of the Council of Chiefs, Alo Sangatago points out: “It was always the role of women in [our] traditional society to mediate between tribes, so it makes sense that Jennifer plays this role here and it was not difficult for chiefs to work with her.”

“The project is helping to bridge the gap between remote communities and the very idea of government and the state” says Ali Tuhanuku, the World Bank’s Governance Specialist in Solomon Islands.

“If people can’t see a presence of government or have their issues at the local level dealt with, people can sometimes feel very little connection to the state,” Ali says. “Considering this is a country that has seen a crisis in state institutions before during the period of conflict known as ‘the Tensions’ – this sense of disconnect is serious and potentially, hugely destabilizing. That’s why these community officers are so important.”

Woman have a central role to play in revitalizing links between the government and small local communities, says Jennifer and Rosita Morsley, a member of the Matangi Women’s Association supports this: “Men have strength but women have heart to understand problems – it’s very good to have women as Community Officers. I work very closely with Jennifer and often go to her with problems or issues that arise from the Women’s Association meeting. If she were a man, some issues would be too sensitive to address for her in our culture – I couldn’t really share my feelings with a male officer.”

“I think we need more female officers because women speak openly with us and relate better to other women – I think more women should come out to join the program.”

Started in 2014, the Community Governance and Grievance Management Program is now expanding to other provinces including the most populous province in Solomon Islands, Malaita. As it grows, gender-focus will be strengthened with the aim of recruiting more female Community Officers. With these improvements, community leaders like Jennifer will continue to strengthen communities and build on government links across this part of the Pacific.