Solomon Islands: A Remote Community Creates its own Path to Recovery

In Daniel’s village, a lack of jobs and youth unemployment led to alcohol abuse and violence. Through a Solomon Islands government, World Bank and Australian government supported program, Daniel is working to fix this.

Makira, October 2018 – The island of Makira is thick with rainforest. The hills that crest its center are heavy with dense jungle that drops down ridges and spills onto the plains, interrupted only by the scars of roads leading to logging sites. Banana trees and coconut palms are everywhere.

Jobs, on the other hand, are not.

The lack of jobs has made life harder for the island’s young people. It is clear when speaking to Michael Gopala, a 30-year old from Kokana, a small village on Makira’s North coast. His story – and how his optimism was derailed by a lack of opportunity – is, unfortunately, all too common in the Solomons.

Michael graduated from carpentry school in the capital, Honiara. He stayed on, looking for employment but eventually had to return to his village where there was no work and less opportunity than the city.

“I was frustrated. I was bored. That’s when I started drinking and making homebrew to mix with ‘kwaso’ (a local distilled spirit) and beer. I would make this in the bush with other young men and soon it became a problem for me,” he explains.

“We would drink out in the bush all night and come back and cause real trouble. We would get into fistfights, we would scream and swear at the community and really frighten people, and families would have to leave their houses and hide in the bush until we had slept and were sober.”

Phyllis Saa of the Kokana’s Women’s Council, remembers the time – and Michael – well.

“We were frightened. Women wouldn’t walk in the community at night if the boys were out and drunk,” she explained. “When they came home they would yell at us and the children would have to sleep at other people’s house to get away from them.”

"Previously we had to take everything to the police. But these young men are people’s children so we don’t want to send them to the police – it is much better now that it is being solved within the community with the peace wardens."
Phyllis Saa
Kokana village Women’s Council 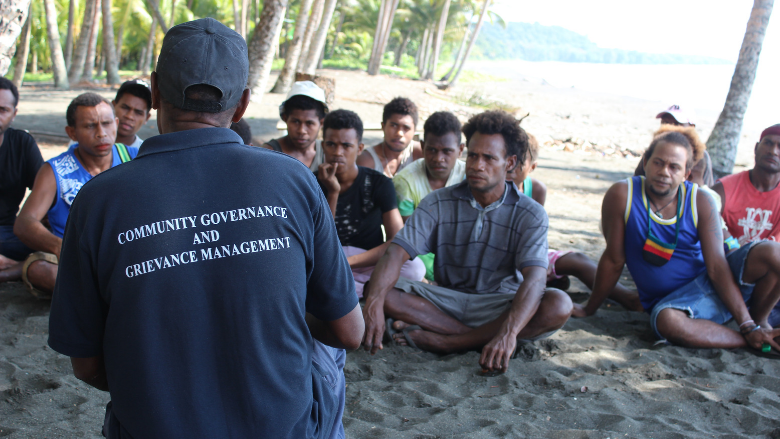 Eventually, Michael was approached by Daniel Danegu, one of Makira’s community-appointed Village Peace Wardens, who asked him to support his work to help stop alcohol abuse in the community.

“The more I worked with Daniel, the more I realized the problems alcohol abuse was causing in the community,” said Michael. “Now I speak to youths to explain the issues and dangers of this type of drinking.”

The Village Peace Warden role is a key feature of the Solomon Islands government run Community Governance and Grievance Management Program which is supported by the Australian government and the World Bank. The program works in several provinces across Solomon Islands to support locally-selected members from the community to act as Peace Wardens or Community Officers.

In remote communities, where police presence is limited, these individuals serve as a first line of community support and contact with law and order systems, provide assistance or direct cases to relevant authorities where necessary. In a country as dispersed as the Solomons – with over 900 islands spread over thousands of kilometers, where the provision of state services is very difficult – this program is proving vital in assisting communities deal with their issues.

“Previously we had to take everything to the police,” said Phyllis, of the Kokana village Women’s Council. “But these young men are people’s children so we don’t want to send them to the police – it is much better now that it is being solved within the community with the peace wardens.”

Through awareness and engagement, such as the creation of local sports competitions and working closely with the young men in the community, Daniel and Michael’s work has started to pay off, with alcohol-related incidents declining.

“[The problem has] now reduced a lot. Even if people have been drinking, it is possible to speak to them and they are polite and are not causing trouble – it has greatly improved,” said Phyllis.

This positive change is not lost on Michael, either.

“I think I could be in prison now or even have been in a serious accident from the amount that I was drinking,” reflects Michael, with eyes cast down. He pauses, rubs the bottom of his t-shirt between his thumb and forefinger before breaking the silence, looking up.

The Community Governance and Grievance Management program is expanding within Solomon Islands due to successes in communities like Kokana. Two provinces, Renell Bellona and Makira, have been piloting the program and it is now expanding to the much larger provinces of Malaita and Central.