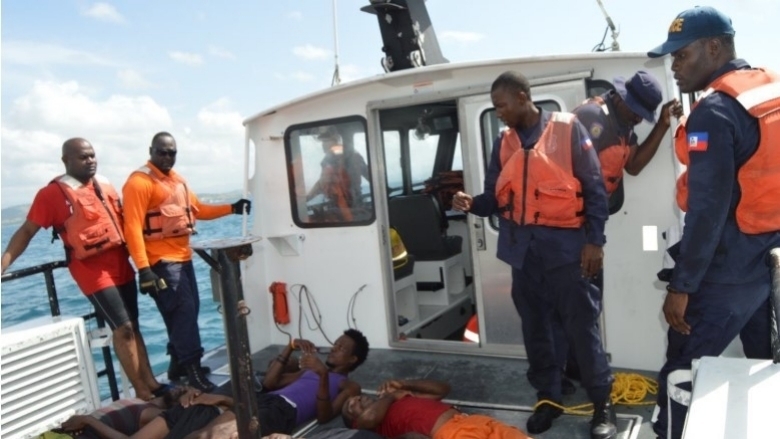 Rescue divers hastily land at this rugged plain that serves as a jetty on the shores of the town of Les Cayes in the Sud department in Haiti. They are attempting to resuscitate fishermen who were taken by surprise by a hurricane out at sea. Meanwhile, a group of brigadiers carrying stretchers and first aid supplies rushes over to a deep-sea fisherman who was rescued at sea.

The truth is, this is a simulation exercise. For six years, the Government of Haiti has been conducting this type of exercise. The goal is to assess real-life implementation of coordination procedures in the departments and communes as well as nation-wide operational control. This exercise also allows the civil protection services to test their intervention capacities.

In Haiti, almost 95% of inhabitants live under the threat of a climate-related disaster. “We have barely recovered from the devastating effects of Hurricane Matthew, which ravaged the region in October 2016. The wind blew the roof off our house. I had to run to seek shelter in a school with my wife and our four children,” recalls Mamanne, a 48-year-old deep-sea fisherman. “This simulation exercise helped us better understand the emergency procedures in place in the event of a climate-related disaster.”

The exercise was orchestrated by the Directorate of Civil Protection (DPC), whose mission is to coordinate disaster interventions and proactively establish risk management plans aimed at mitigating the impact. For this full-scale exercise, the DPC mobilized several actors: the national Emergency Operations Center as well as its counterparts in the Sud and Nippes departments, representatives of State and private sector entities, NGOs, donors. “Thanks to this simulation, the entities involved in risk and disaster management were able to fully understand their roles and know exactly when they will need to take action in the event of a disaster,” states Jerry Chandler, Director of Civil Protection. 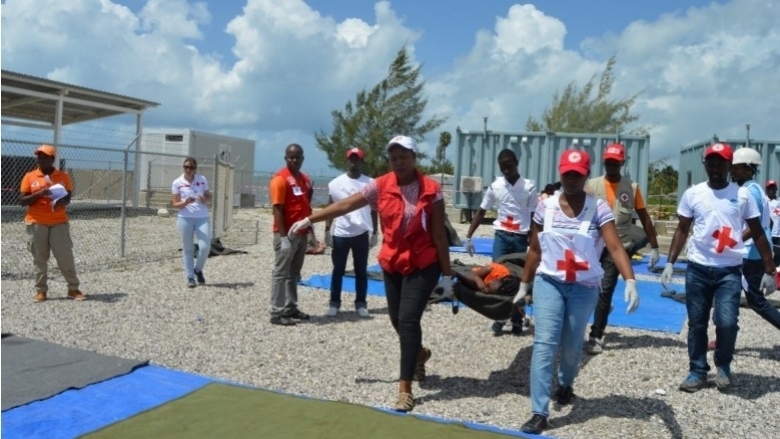 For many years, the islands of the Caribbean have been vulnerable to major disasters, particularly climate-related ones. In 2016, the region experienced seven hurricanes, four of which were major, including Hurricane Matthew, which killed over 500 people in Haiti and caused US$1.9 billion in property damage, the equivalent of 22% of the country’s GDP.

These climate-related catastrophes have a disastrous effect on economic growth, fiscal stability, and infrastructure. Experts agree that over the coming years, the rise in temperature in the Caribbean region could lead to an increased likelihood of episodes of severe rainfall and flash flooding.

“In our neighborhood, the slightest rainfall presents a real threat for us. Wastewater runoff areas become clogged because of poor waste management, among other reasons. The ongoing population increase leads to the emergence of new, haphazardly built housing structures, which heightens our vulnerability,” explains a fisherman living in the impoverished neighborhood of La Savane, on the coast of Les Cayes.

Haitian villages are facing rapid, unplanned urbanization, which further exacerbates the population’s vulnerability, particularly among the most disadvantaged. Every year, more than 133,000 inhabitants leave rural areas for the city, increasing the proportion of the population living in urban areas to 52% in 2015. Cities continue to expand in an uncoordinated manner, leading people to settle in areas exposed to frequent floods, landslides, mudslides, and rising tides.