Papua New Guinea: Taking the Fight Against TB on the Road

Papua New Guinea’s Daru Island has some of the highest, per capita, rates of Tuberculosis (TB) in the world. Yet getting diagnosis and treatment for TB can be a major challenge for the island’s 18,000 residents due to the island’s tough terrain. In an effort to stop the spread of TB on the island in its tracks, a new World Bank-supported project is taking diagnosis and treatment of TB on the road.

“Hurry up and come! The health workers are here!”

With the help of an enthusiastic community member and a megaphone, the Tuberculosis (TB) screening team announce their arrival in Bamu, a small community on Daru Island, Papua New Guinea (PNG).

Within minutes, community members emerge from their homes, gardens and fields to make their way towards the makeshift clinic. By the time the first community members take their seats at the registration desk, the team is already hard at work preparing for another day in the fight against TB.

They are there with a clear mission: to screen as many people as possible for TB, educate the community about the disease, and link suspected cases directly to treatment services.

Health workers begin taking details. Weight and height are recorded. Counsellors run consultations to combat stigma and dispel fears around X-rays and a potentially positive result. Then one-by-one, each visitor enters the mobile screening van, where an X-ray and thermal image provides an on-the-spot diagnosis of possible TB infection.

"It’s a massive door-to-door mobilization of people to tell them about the dangers of tuberculosis, and the fact that everybody is at risk of getting it"
Dr Simon-Peter Akena
Project Manager of World Vision’s Stop TB Program 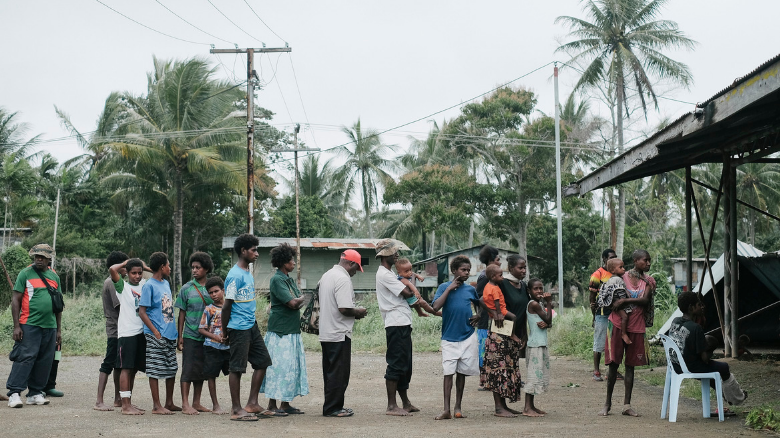 Mobile screening for TB is addressing one of the biggest challenges facing health authorities in attempting to combat the spread of TB: getting people to clinics to be tested.

The challenge is immense. In 2016, the World Health Organization (WHO) recommended that the entire population of Daru be screened because of alarmingly high rates of tuberculosis, especially and even-harder-to-beat multi-drug resistant tuberculosis.

Yet health services in this island in the remote south-west corner of PNG have struggled to cope with TB for many years, compounded by extremely challenging terrain that makes it difficult for the population to travel to visit the central hospital for diagnosis and treatment. 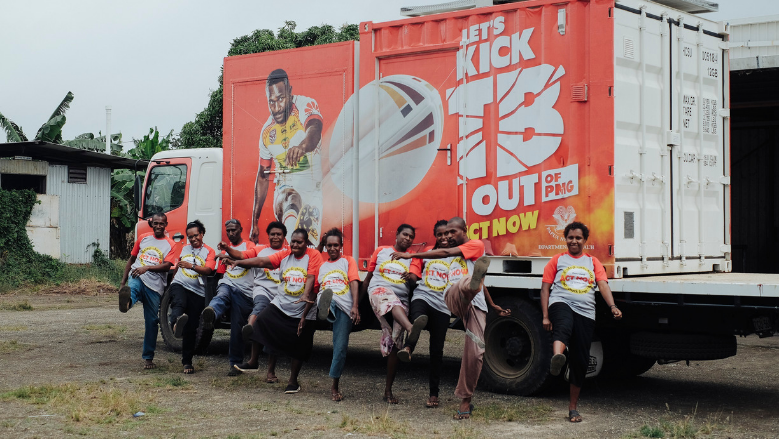 To combat this challenge, ‘the TB van’ – a custom-built, all-terrain, mobile X-ray screening van, complete with a giant photograph of PNG’s most famous rugby player, Ase Boas, and the slogan ‘let’s kick TB out of PNG’ – hit the road with the mission to test the entire population of Daru for TB.

“In Daru the hospital is quite far and most of the people are not going to the hospital until they are really sick,” said Natalie Fimbuvu, the X-ray technician on board the van. “We help them by providing services at their doorstep.”

Natalie is a vital part of the 10-person health team that has so far screened around 6500 people across Daru in a little under a year. Natalie calmly and expertly guides each and every person through the two-minute X-ray process inside the van.

“It’s the first time many of these people have had an X-ray, so many are nervous,” she says. “I’m looking for abnormalities in the chest region, especially the lungs. For a normal X-ray it’s usually black – both lungs – but if there are white patches in between the lungs, then there’s an abnormality there.”

After a screening, Natalie provides a score out of 100 for each person that rates the likelihood of infection. Low-score patients are free to go without further action, but those with a higher score are required to produce a saliva sample for further analysis. If a TB infection is identified, patients immediately begin an intensive treatment program at the hospital, followed by the dedicated TB treatment sites close to their homes.

“We live a bit of a distance away from the clinic,” says Simona Vanaria, a Bamu community resident. “Sometimes when we are sick, we are scared to come to the hospital. [But] I’m happy that I came with all my family to check and the results are negative.”

Working together to kick TB out of PNG

Sandra Wanakrah, WHO’s Coordinator for TB Screening in Daru, is working alongside Natalie in the fight against TB. She says there is a strong camaraderie among the team: that this is important, life-saving work.

“We know it’s a big fight but if we can all stand together and do as much as possible, to the best of our potential, I’m sure we can do it. We can kick TB out of PNG,” says Sandra.

The Emergency TB Project is funded by the World Bank, through the International Development Association (IDA), the World Bank’s fund for the world’s most in-need countries, alongside the Australian Government and PNG’s Department of Health, together with partners including the Burnet Institute, WHO and World Vision.