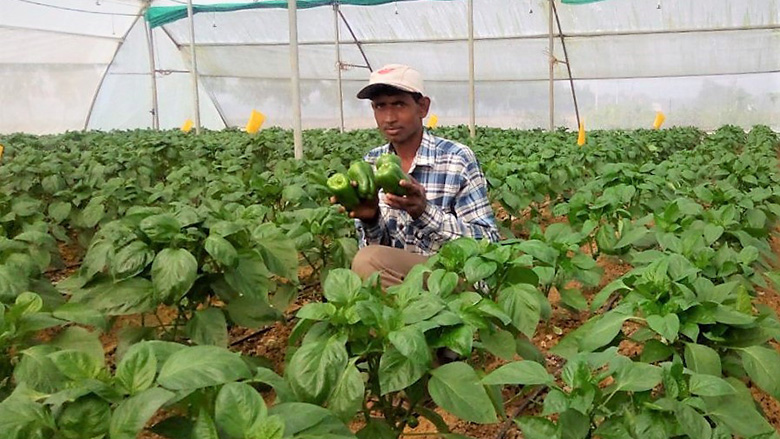 Creation of irrigation facilities has enabled many farmers like Sahadeb to produce a variety of fruits and vegetables, increasing incomes many-fold. He, as many others like him, is implementing modern farming methods like indoor cultivation, drip irrigation and fertigation, cutting down input use and growing high-value crops all year long.

Sahadeb Das farms a tiny patch of land in Dhurkhali – a remote village in West Bengal’s Howrah district. With virtually no access to irrigation, Sahadeb struggled to make a living off a single crop of paddy he grew during the Kharif (rainy) season, plus an occasional crop of vegetables; but the scale was small and earned him little or no profits. During the rest of the year, Sahadeb, like many other farmers in similar situations, was forced to take up other livelihoods to fend for his family.

Now, with irrigation water streaming into his parched 1.5-acre patch during the dry season, Sahadeb has reason to smile. He has diversified from just one paddy crop to include a variety of fruits and vegetables, which he grows throughout the year. The higher prices of his horticultural crops have more than doubled the earnings, rising from $900 to $1,850 per annum.

Sahadeb is not alone in his success. With irrigation newly-provided by the West Bengal government’s Accelerated Development of Minor Irrigation Project (ADMIP), other small and marginal farmers too have seen their incomes multiply manifold.

The Project, funded by the World Bank, seeks to boost agricultural productivity and profitability for 100,000 small and marginal farmers in the drought-prone regions of the state.

Farmers like Sahadeb have benefitted from the creation of minor irrigation structures such as ponds, tube wells and check dams. Those with adjacent parcels of land have been brought together into Water User Associations (WUAs) that operate these schemes and drive the efficient use of irrigation water through community participation. These WUA clusters have also attracted reputed agribusiness companies to demonstrate modern technological advancements such as high-yielding and low-water-consuming hybrid rice varieties, helping these clusters avail benefits of scale. Through such capacity building, farmers are learning to grow a variety of commercially viable crops using new technologies.

With these initial measures, Sahadeb has been able to grow a cornucopia of vegetables and fruits, including bananas, mangoes and pears – all on his 1.5 acres! As word of his success spread, the other farmers were curious and sought the project’s assistance. 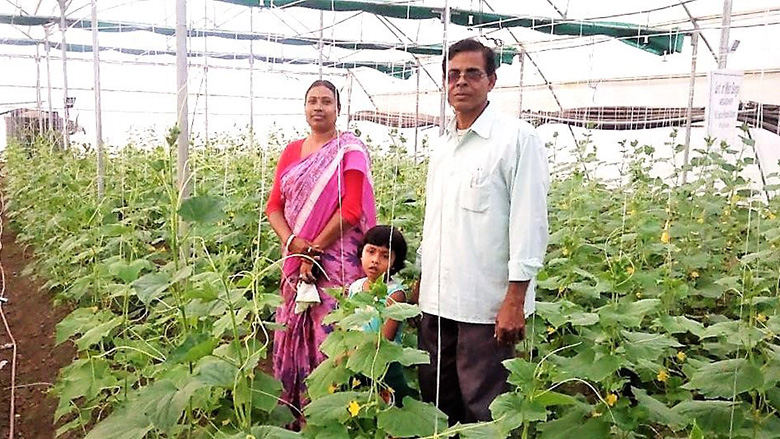 Uday Pal also doubled his farm income from $700 to $1,400 through diversification into horticultural crops. He is likely to earn an additional $2,300 over a period of just five months from the cucumbers he produced in the poly house financed by the project. The manifold increase in his income will help support a better life for his family.

Enthused by the doubling of his income, Sahadeb started exploring new ways to further enhance his earnings from the same plot of land. At that point, the Project introduced indoor cultivation, where mechanisms for temperature and humidity control make it possible to grow off-season vegetables that fetch much higher prices.

To learn the ropes, the Pproject took Sahadeb and others to see a poly house in Punjab managed by a leading international company. The company imparted intensive training on the cultivation and marketing of new types of vegetables, and provided the farmers with high quality seeds.

The exposure visit proved to be an eye-opener. On their return, farmers started to grow high-value crops such as bell peppers, mini cucumbers and cherry tomatoes inside the poly house. At the same time, they diversified the risks of crop failure by growing other high-value crops such as broccoli, musk melon, onion and cabbage, among others, in the adjacent open fields.

Although pilots began in November-December 2017, farmers have already begun to see the difference. Uday Pal’s poly house of 500 square metres, for instance, is likely to yield 5 tons of high-quality cucumber – over 6 times the average yield in India! With improved quality, he also expects to sell these cucumbers at Rs 40 per kg, almost twice the price of local varieties. Even at conservative estimates, Pal expects the poly house alone to earn him nearly $2,300 in just five to six months.

As neighbouring farmers visit Sahadeb and Uday Pal’s poly houses, they are beginning to understand that replication is simple and, better yet, it can be done on small parcels of land.

Starting with two districts – Howrah and Darjeeling – the Project has financed 12 poly houses in all, equipping them with state-of-the-art technology such as drip irrigation systems integrated with fertilizer application systems and automated foggers to maintain humidity.

This is not the end, however. Getting consumers to buy better quality produce is just as critical. For this, the international company, with support from project officials, is helping farmers connect with organized retailers in Kolkata, West Bengal’s capital. Big Basket, a well-known Indian retail-chain, has expressed interest in procuring poly house produce from farmers at competitive prices.

Nonetheless, the journey toward productive and profitable agriculture is fraught with complexities. To achieve this, a synergistic partnership is needed between the private sector (for technology, knowledge and marketing support) the community (to drive optimal utilisation of irrigation water) and the public sector (to provide policy support).