Skip to Main Navigation
This page in:_
FEATURE STORY September 13, 2018 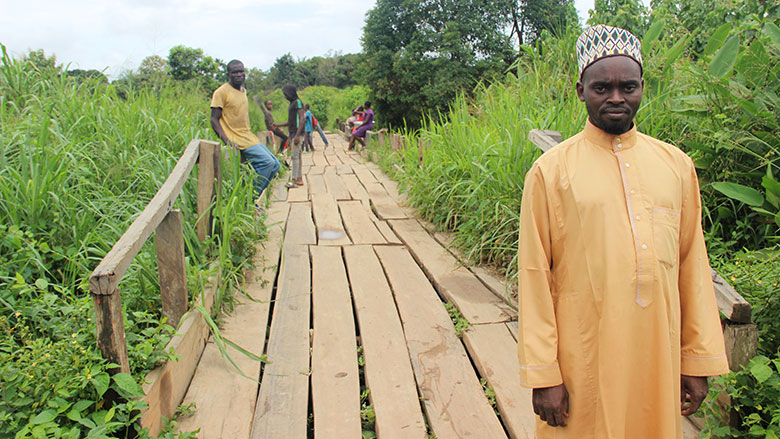 Abdoulaye Harouna is the Vice-President of the Consultative Committee for the village of Mandjou Ier in eastern Cameroon, and he is proud of this bridge because the entire community was involved in the project.

MANDJOU Ier, September 13, 2018 - Théodore is 11 years old. He crosses a little wooden bridge with his younger brother to gather cassava from the family field on the other side of the creek. “The villagers built this bridge,” explains Abdoulaye Harouna with pride. “We pooled together our funds for several months to cover the cost of building it. It cost us CFAF 180,000.”

Abdoulaye is Vice-President of the Consultative Committee for the village of Mandjou Ier in eastern Cameroon, and he is proud of this bridge because the entire community was involved in the project. The inhabitants themselves identified the need, decided that it was a priority for the village and took things in hand to build it. It is real citizen engagement in action. “Without this bridge, it was virtually impossible to reach the fields when the water level rose, and the households that live essentially on farming lost huge amounts of money,” he explains.

The collective engagement was encouraged by the Cameroon National Community Development Program (PNDP), which has provided $70 million to date in World Bank funds to promote a community-driven approach to development. Communities are not only involved in identifying the most urgent problems affecting their village, they also participate in developing solutions to their development constraints and finding ways to improve their quality of life. By being included in the implementation of these solutions, they ensure that are realistic and sustainable.

The village of Mandjou Ier, one of 25 villages in the commune of Mandjou, centralizes and coordinates all the villages’ community-driven development projects in a Commune-level Development Plan (PCD).

So how exactly does citizen engagement work in practice? In Mandjou Ier, for example, the voice of 1,150 or so inhabitants is expressed by the village’s three representative groups (men, women andyouth) who meet on a regular basis. They agreed at their most recent meetings that the villagers’ priority needs were to improve education, health, and water. From there, they decided to start by building two wells and making bench desks for the local school. These two priority projects were included in the Commune-level Development Plan for the commune of Mandjou.

The nationwide program set up in 2004 covers all 360 communes in Cameroon today, and 91% of them have already taken part in a participatory process. “The project helps communes improve their management of local public finances,” points out Benjamin Burckhart, project manager and senior social development specialist at the World Bank. “And the local community-driven development process helps guarantee the provision of suitable, sustainable, quality infrastructure and socioeconomic services.”

The approach also strengthens social cohesion by building bridges between villagers. It also helps improve governance, since the villagers themselves oversee the work on the projects and micro-projects, evaluate public service quality, and handle complaints and grievances. At the end of each project, this same set-up also serves to easily measure beneficiary satisfaction and learn lessons for future projects.

The results speak for themselves: the program and the communes have co-funded some 4,000 micro-projects in areas covering education, hydraulics, electrification and health, thereby improving living conditions for over two million people.