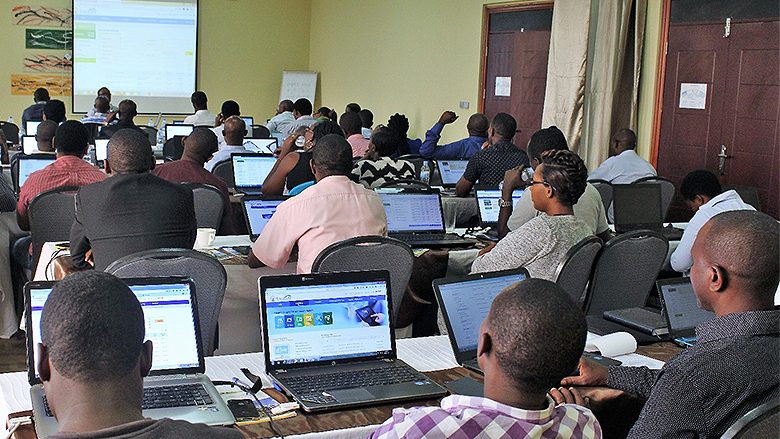 One of the training sessions to government procuring entities

Rwanda is one of those countries. In fact, it is the first African country to implement an e-GP system nationally, and in a shorter span of time compared to other countries. Rwanda’s e-GP journey has the potential of creating a ripple effect across the continent and beyond. How did they do it?

After passing a new procurement law in 2007, and later establishing the Rwanda Public Procurement Authority, the country began looking at relevant experiences on how to modernize its procurement system. Rwandan officials, for example, traveled to the Republic of Korea to learn from that country’s electronic procurement system, one of the most advanced in the world.

Then, in 2013, the Rwandan government approached the World Bank to fund a feasibility study on the implementation of its e-GP system. The feasibility study identified major challenges and recommended solutions. Some the challenges included: inconvenient business registration; inaccurate management information & analytics; lack of one-stop procurement portal; and inefficient document and records management system.

Based on the recommendations to tackle these challenges, Rwanda decided to develop the Rwanda e-GP system called  UMUCYO, which means “Transparency” in the local language. UMUCYO, a web-based e-Procurement system, was developed as part of a World Bank-funded Public-Sector Reform Program-for-Results.

The system consists of an online portal with modules for advertisement, e-bidding and disposal, evaluation, contract management, inspection and acceptance, framework agreements, catalog and shopping mall, where suppliers can register and submit bids online. The system is open to all, including national and foreign bidders. During the registration process the system automatically access the databases from the Rwanda Development Board to authenticate the registration status of bidders to make sure they are in good standing.

After a bid is accepted, for example, the system allows contract drafting and sending it to the winning bidder for review. After the supplier accepts and electronically signs the contract, the contract is shared with the Rwanda’s Financial Management Information System (SmartFMS) to issue a purchase order and to make payments.

With the support of the World Bank, in July 2016, the government launched a pilot program of the e-GP system in eight government ministries, agencies and districts. The World Bank provided technical assistance and capacity building during the development and roll out of the new system.

Before launching the pilot, a series of training were offered to government officials from the selected entities and the business communities on using the e-procurement system. Media and awareness-raising campaigns also were conducted across the country to encourage contractors and suppliers to register in the new system. The training was also extended to internet cafe operators to ensure that small and medium-size enterprises had access to opportunities in public procurement.

The overall one-time cost of the project at $7.8 million covered the development of the e-GP system, data center equipment, and capacity building, as well as about $1.12 million in ongoing costs.

“While the initial investment in the system seems to be high, experience from around the world shows that e-procurement provides powerful cost management solutions that lead to significant savings in public spending,” said Hiba Tahboub, Procurement Manager at the World Bank’s Governance practice.

After one year of successfully piloting the system, the government rolled out the eGP nationwide beginning in July 2017. The only government entities not using eGP are schools, district hospitals and health centers. The system will be progressively rolled out to them in 2019/2020.

The system is already delivering some benefits to users, as per their feedback. The system, for instance, has reduced time and allowed cost savings for both government officials and contractors, as the single online portal provided all the documents and information required, eliminating the need for in-person visits and printing costs.

“The Procurement management of the Ministry has significantly improved as the result of use of the E-Procurement system,” said Mr. Yassin Iyamuremye, Director General of Corporate Service in MINAGRI. “The system also contributed in reducing fraud and corruption as there is no personal contact with bidders, and when complaints are received, these are responded to through the E-Procurement system in a transparent way.”

A World Bank assessment of Rwanda’s e-GP system, following the Multilateral-Development Banks e-GP Guidelines, showed the system and its implementation were in line with good international practices and could be used by World Bank-financed projects, and most likely all donor-funded projects.