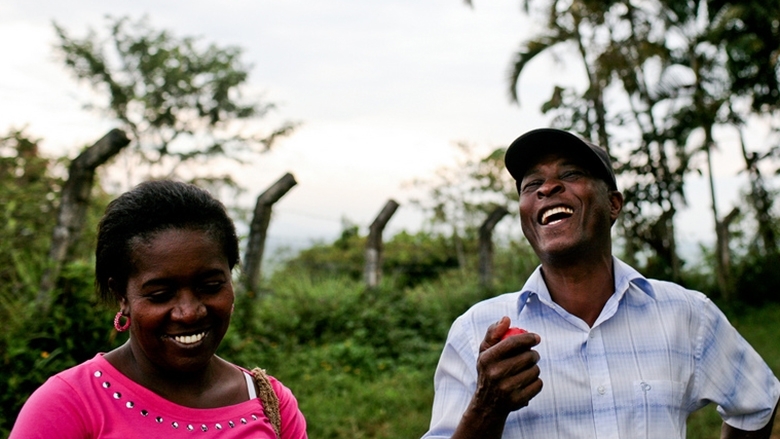 They are not the people who prepare cocktails behind a Caribbean-themed bar or those who teach axé or zumba. Neither are they the musicians with the best sense of rhythm in the band, or the bouncers at the discotheque. Stereotypes have placed them in those locations, but it is time to get to know Afro-descendants for what they really are: Latin America’s most invisible minority.

From the garífunas of Central America to the pardos of Brazil, the morenos of Venezuela and the negros of Argentina, Afro-descendants of the region live in vastly different conditions despite sharing a common history of exclusion and discrimination.

Currently, they represent a quarter of the population of the region. Ninety-eight percent are concentrated in Brazil, Venezuela, Colombia, Cuba, Mexico and Ecuador. Unfortunately, they also represent the majority of poor people in the region: they are 2.5 times more likely to live in chronic poverty than whites or mestizos. They also have fewer years of education and are more often victims of crime and violence, according to a new World Bank report: Afro-descendants in Latin America: Toward a Framework of Inclusion.

“In Brazil, with the largest Afro-descendant population in the world outside Africa, they are still twice as likely to be poor as white Brazilians. In Uruguay, one of the most egalitarian countries in the region, Afro-Uruguayans are three times more likely to be poor,”explains the report.

Despite the social gains of the 2000s in the region, which benefited the Afro-descendant community by reducing the income gap that has historically separated them from other Latin Americans, Afro-descendants, like other excluded groups, continue to face cumulative disadvantages, unequal opportunities and a lack of recognition and dignity.

Being born into an Afro-descendant household frequently opens the door to an unequal world. Gaps in education persist even though education plays a key role in reducing the likelihood of being poor (for Afro-Brazilians, for example, completing primary education can reduce the likelihood of being poor by more than 9 percent, while finishing secondary and tertiary education can reduce it by 16 percent and 23 percent, respectively).

Discrimination, prejudiced representations in textbooks, inadequate classroom materials and teachers that lack the qualifications to manage racial diversity are some of the factors that limit the school performance of Afro-descendant children and youth, according to the report.

But times are changing in the region. The growing recognition of Afro-descendants, achieved thanks to the perseverance of their organizations and leaders, represents a clean break with a past that began with one of the darkest chapters in Latin American history: slavery and its terrible legacy of social exclusion.

According to the report, an important sign of change is the growing inclusion of ethno-racial variables in national statistics, which had not been reported in most of the countries of the region since the first half of the 20th century.

Other important signs include the adoption of a variety of affirmative action policies in some countries, such as reserved quotas in the labor market and educational institutions, awareness-raising campaigns, anti-racist legislation and the rise of an Afro-descendant political class.

“Despite the gaps, the region has never been more willing to face ethno-racial discrimination as it is today. Twenty years ago, we didn’t even have data and talking about the relationship between race and exclusion was practically taboo. Today, countries such as Brazil, Uruguay and Colombia have affirmative action policies. In many countries, a class of Afro-descendant leaders is consolidating. All of this is reason for optimism,” said Germán Freire, a World Bank social expert and one of the authors of the report.

Afro-descendants are an extremely diverse group and as such, there is no single solution to their problems.

The World Bank report calls for action to close existing gaps. According to the authors, economic growth, the set of laws and international anti-discrimination and anti-racism agreements are not enough to close persistent gaps. This is because Afro-descendants are anchored to poverty for structural reasons, which are seldom expressed in direct ways.

“Differentiated policies that target ethno-racial inclusion are needed. To this end, the report proposes a framework of inclusion based on improving opportunities, abilities and the dignity of Afro-descendants to enable them to assume their role as key actors in the region’s development,” said Freire.