Mali: Using Bikes to Get to School and Stay in School 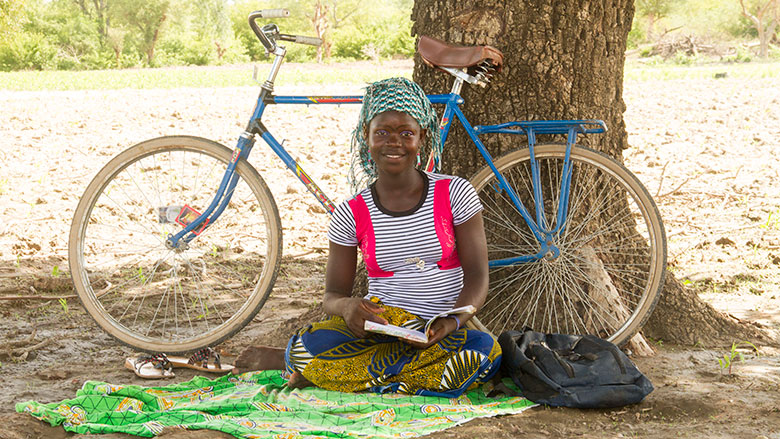 “On evenings, I was very tired when I got home and I had neither the time nor the energy to study,” said Déboura, who had to drop out of school and recently returned when she got her bike.

BAMAKO, July 25, 2018—One morning unlike any other, Déboura Goita, wearing her backpack, gets off her blue, brand new bike to head toward the big shade tree in the Waki school yard in Kimparana, Ségou region, located 491 kilometers from Bamako. Several bikes are already propped up against the tree. Once she has checked that hers is properly lined up and secure, she goes to her classroom, which is a few steps away.

Sixteen-year old Déboura is a seventh-grade student (first year of lower secondary school). Her mother has been the sole provider for her, her three sisters, and her two brothers since their father died. Before getting this bike, she walked six kilometers every day to get to the closest school to her home.

“On evenings, I was very tired when I got home and I had neither the time nor the energy to study,” said Déboura, who had to drop out of school and recently returned when she got her bike, which she handles very skillfully and treats with great care. 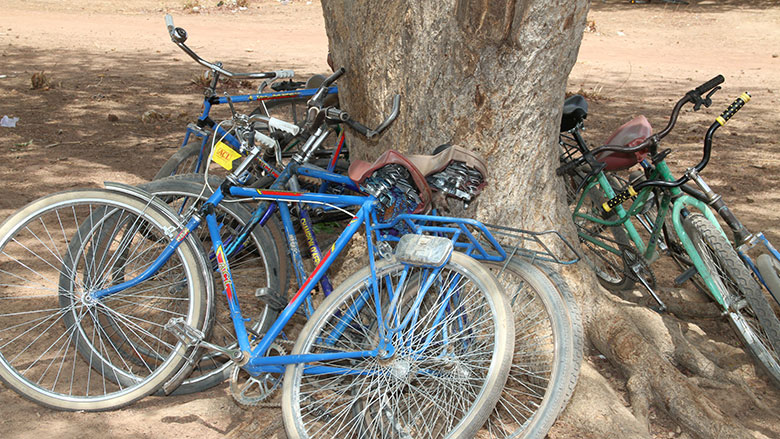 Some villages are more than 15 kilometers away from the school.  We hope that the bikes will lead to a lower school dropout rate,” stated the Waki school principal. Photo credit: Bachir Diallo, World Bank

In the classroom, Déboura is now deepening her knowledge of French, math, history, and geography. “My favorite subjects are physics, chemistry, biology, geography, and civics and ethics,” she said, sitting next to the friends she was able to rejoin while focusing on copying in her notebook the sentences being written by the teacher on the blackboard.  “My dream is to become a teacher,” Déboura continued, smiling before lowering her eyes toward her notebook.

Like Déboura, 27 other young girls in Kimparana have managed to return to school and avoid becoming dropouts as a result of the bikes they have received. “Déboura now diligently attends classes, arrives on time every day, and has even taken the second quarter exams, which were administered right after the donation of the bike,” noted Waki school principal Mamadou Konaté.

After school, Déboura usually helps her mother with the housework—preparing meals, fetching water, doing the dishes, and sweeping the yard.  She does farm work when she is on vacation. 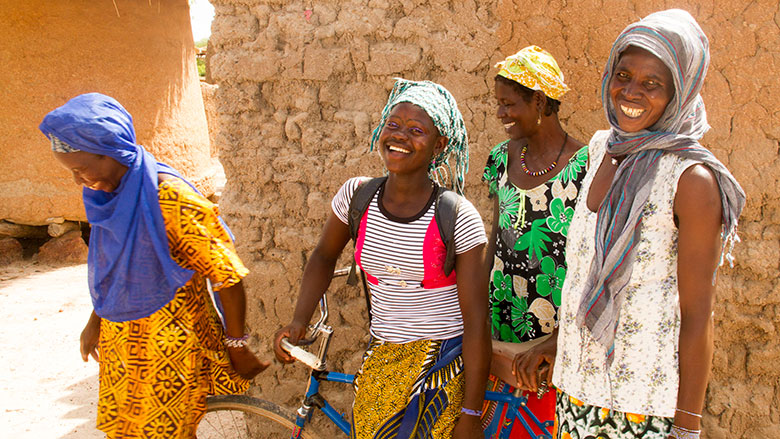 In addition to bikes, the SWEDD project has also provided school and sanitary kits to 3,000 girls and the 900 parents or host families have received grains and other foodstuff. Photo credit: Bachir Diallo, World Bank

Girls being out of school: a rural phenomenon in Mali

In Mali, the out-of-school situation among young girls remains a concern.  The secondary school attendance rate is 47.8%—52.9% for boys and 42.8% for girls—a situation that is particularly serious in rural areas. In the view of Birama Kassogué, the director of the Kimparana educational outreach center, the school dropout issue is largely the result of household poverty, early marriages, and the distance students have to walk to get to school. “Some villages are more than 15 kilometers away from the school.  We hope that the bikes will lead to a lower school dropout rate,” he stated.

In addition to the 27 young girls from the Waki school who have received bikes to get to school, continue their studies, and be able to realize their dreams, 900 young girls from 75 schools in the regions of Kayes, Mopti, Ségou, and Sikasso can now escape the arranged marriages that their parents end up proposing to them when they stay at home. 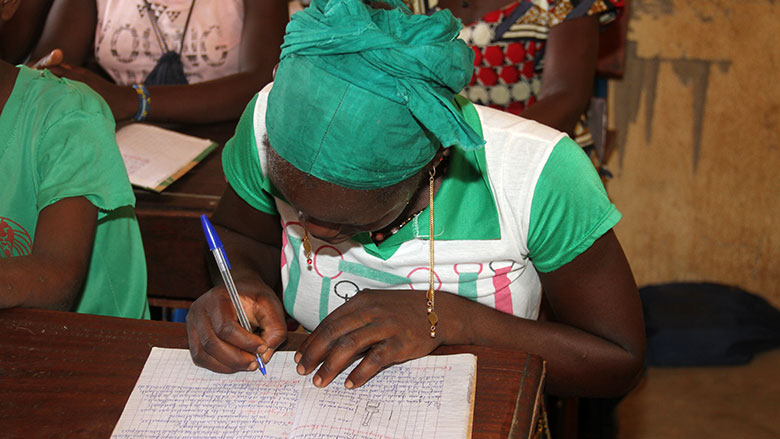 “My dream is to become a teacher,” Déboura said, smiling before lowering her eyes toward her notebook. Photo credit: Bachir Diallo, World Bank

“My challenge: the DEF”

The provision of these bikes is one of the initiatives funded by the World Bank through the Sahel Women’s Empowerment and Demographic Dividend (SWEDD) project, as part of the effort to curb the school dropout phenomenon among young girls, the slogan of which is “My challenge: the DEF!” (Diplôme d’études fondamentales), which certifies the completion of lower secondary school in the ninth grade.

In addition to bikes, the project has also provided school kits containing such items as books, notebooks, and bags to 3,000 girls. They have also received sanitary kits (soap and sanitary pads) and the 900 parents or host families have received grains and other foodstuff.

Furthermore, to offer an incentive to young girls to stay in school and also encourage their parents to keep them there, the project organizes make-up classes in math, physics, chemistry, French, and English for more than 7,400 girls attending the 75 schools selected. 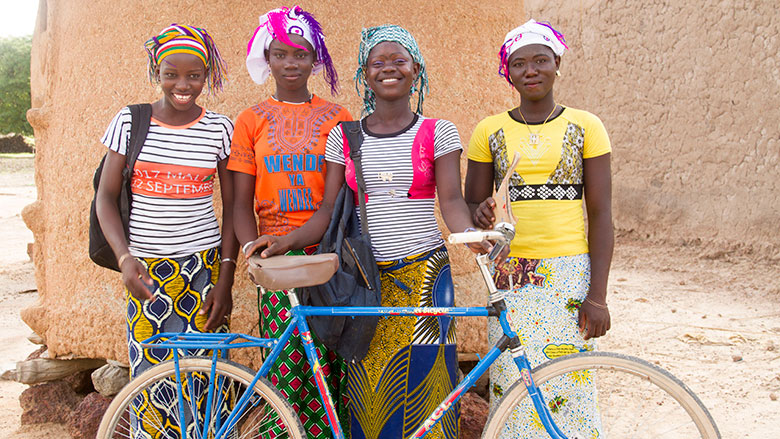 The SWEDD project is expected to allow 22,000 girls like Déboura to stay in school, continue their studies, and take charge of their lives.  Photo credit: Bachir Diallo, World Bank

The SWEDD project has also trained 238 teachers and school counselors in children’s rights and raised their awareness with respect to traditional practices that stifle the potential of young girls, such as early marriages and pregnancies, gender inequality, the lack of reproductive health, and gender-based violence.

Because their input is very important to the success of this initiative, 48 religious and community leaders have also been mobilized and trained to become champions of the rights of young girls, particularly in the context of public discussions organized in schools.

It is estimated that 22,000 girls like Déboura will be able to stay in school, continue their studies, and take charge of their lives.