Gabon: leading ICT-connected country in Central and Western Africa thanks to judicious investments 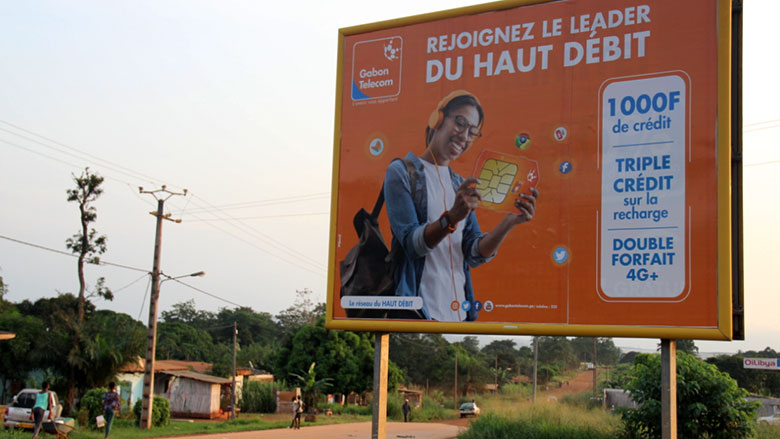 In just a few years, Gabon has made spectacular strides in internet access, and billboards of this type now saturate cities across the country: O.Hebga/World Bank

LIBREVILLE, June 25, 2018 ‒ It is impossible these days to drive around the cities of Gabon without noticing the large billboards promoting internet access at rates that were unimaginable only a few years ago.

This is a wonderful development for Alphonse, a young, 34-year old public-sector professional.  WhatsApp, Facebook, LinkedIn and Instagram are all applications that this ultra-connected young man uses on his telephone for both work and pleasure.  “With the rise in the number of providers of internet and mobile telephone services, internet subscription rates have fallen considerably and the service provided by Gabon Telecom has greatly improved,” he explains.  “I work between Libreville and Port Gentil; thanks to high speed, with just one click I can now complete transactions and administrative formalities that in the past used to take me a ridiculously long time because of how slow and unreliable the network used to be.”

Over the past few years, digital technology has revolutionized a number of areas and information and communication technologies (ICT) have been providing a growing number of solutions to developing countries.  By providing people with access to banking, administrative and medical services, they have been particularly effective in helping to reduce distances in some countries.

The internet can also serve as a powerful tool for sensitization and distance learning as well as for the collection of data that are essential for the formulation of development policies.  Some countries carry out household polls and surveys using mobile telephony.

Once the network is fast, reliable and economical, then there is no end to the list of possible benefits.  This is why Gabon has decided to improve its network coverage and to roll out high-speed fiber optics through the Central African Backbone (CAB) project. 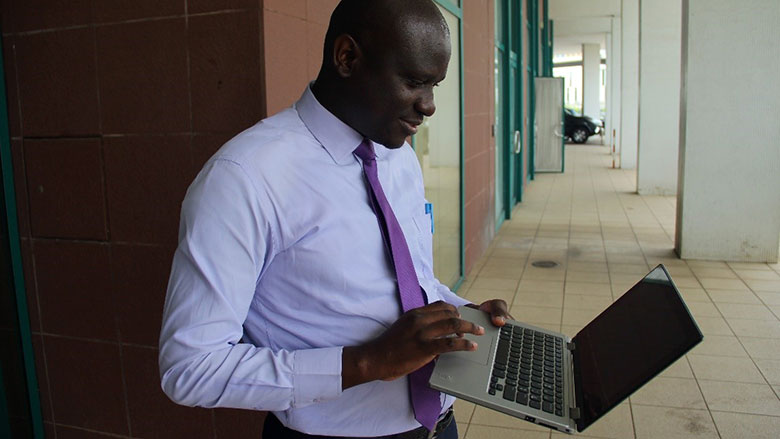 Find the right financing and develop an attractive legal framework

Launched in 2012, the project aims to increase the rate of penetration of high-speed internet by expanding network coverage across the entire territory of Gabon and by lowering prices.  It is part of a regional program with other countries of the Central African sub-region and is also designed to strengthen regional integration.  The program consists of a series of complementary projects, financed by the World Bank, and is designed to improve the communications infrastructure between Cameroon, the Central African Republic, Chad, Sao Tomé and Principe, Congo and the DRC.  It is patterned on other regional programs already implemented or underway in West Africa and East Africa (Regional Communications Infrastructure Program).

In pursuit of this objective, the Government started by developing a digital strategy. It then put in place new public and regulatory policies to create an environment conducive to the development of the sector, promote competition and innovation, and attract new international investors. Having launched its operations in October 2017, the Groupe Vivendi Africa (GVA) is the latest provider to come on the market.  GVA launched its first ultra-high-speed fiber optic internet service in Africa, using utility poles. “Our teams construct the best possible telecommunications network for the people of Gabon, because we are convinced that high-speed internet access is a contributing factor to economic and social development,” explains Marco de Assis, director-general of GVA.

The State has also invested extensively in international and national infrastructure, notably for the construction of a fiber optic submarine landing station and a terrestrial network of over 1,100 km in length, using a public private partnership (PPP) arrangement.

These investments have paid off, as the cost of internet access has fallen tenfold since 2010, dropping from CFAF 10,000/month in 2012 to CFAF 1,500/month today (that is, from 18 to 2.8 dollars).  Some providers now offer a 4G flat-rate package (with a 1 GB usage limit per 30 days) for only CFAF 4,000.  Furthermore, there has been a sevenfold increase in the number of subscribers over the same period.

These outstanding results paved the way for the award of additional project financing of 23 million dollars in 2016. “This additional financing will serve to expand the Backbone network and to link it to that of Cameroon and Equatorial Guinea, as well as to two additional provincial capitals, so that even more cities and towns are covered, and to enable Gabon to pursue its digital transition.  Gabon’s ambition is to become a ‘regional digital hub,’” notes Charles Hurpy, Task Team Leader and World Bank telecommunications specialist.

Given the current rate of progress, Gabon should not be long in realizing its ambition, as the country has risen 10 places in the 2017 internet development index world classification, compiled in November 2017 by the United Nations specialized agency for information and communication technologies (ITU).  Gabon is now the sixth best ICT-sector performer in Africa, after Mauritius, the Seychelles, South Africa, Cabo Verde, and Botswana.

The World Bank continues to support Gabon’s aspirations in this area, notably through the e-Gabon (a) project designed to promote the modernization of the national health information system. The World Bank also aims to assist Gabon to promote a dynamic ecosystem capable of enhancing digital innovation and creating local and regional jobs and services.