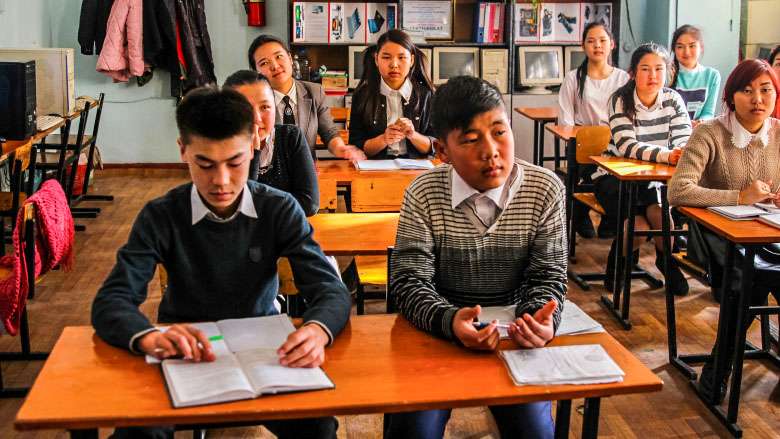 The Kyrgyz Republic is one of the most seismically active countries in Central Asia, and constantly at risk of earthquakes – with more than 300 registered annually. A recent study estimates that earthquakes in the country lead to economic losses of over US$ 280 million (or 4.3% of GDP) per year because of damaged buildings, property and infrastructure.

But earthquakes are not the only danger facing the Kyrgyz Republic. The country is also highly prone to landslides, mudflows, glacial lake outburst floods, and avalanches. And, it is predicted that over one third of glaciers in Central Asia may disappear by 2100, which will dramatically raise the incidences of flash flooding, glacial dam bursts, and other extreme weather events.

In the Kyrgyz Republic, the impact of earthquakes is especially acute in the education sector, with over US$ 12 million in economic losses each year. But, the threat to human life is even more significant. Around 1.5 million Kyrgyz students, in more than 3,000 school buildings across the country, are at significant risk from earthquakes.

As such, the Government has adopted the State Program on Safe Schools and Preschools of the Kyrgyz Republic, which aims to improve the safety of all 3,228 educational facilities in the country by 2024. The World Bank and the Global Facility for Disaster Reduction and Recovery (GFDRR) are providing support to the Government in implementing this forward-looking Strategy.

The recently approved Enhancing Resilience in Kyrgyzstan Project will help improve the safety and functionality of educational facilities across the country, by modernizing infrastructure and implementing specific retrofitting programs to ensure that school buildings are more resistant to natural disasters. With support from the World Bank’s Global Program for Safer Schools (GPSS), this project will build upon the lessons learned from safer school projects undertaken in other countries, including Colombia, the Philippines, and Turkey, among others.

The project also aims to improve energy efficiency, heating, water and sanitation in selected educational facilities, given that most schools were built during the Soviet period and are in need of urgent modernization. And, as part of the State Program on Safe Schools and Preschools of the Kyrgyz Republic, a web-based school infrastructure module will help assist the Ministry of Education and other relevant agencies in the management and maintenance of school infrastructure.

In a country where one quarter of the population lives below the poverty line, natural disasters not only undermine educational opportunities and the development of children, they compromise overall poverty reduction as well.

With World Bank support, the Kyrgyz Government is taking critical steps to build a stronger, safer, more resilient infrastructure for the country’s education sector, ultimately to protect children and their future.