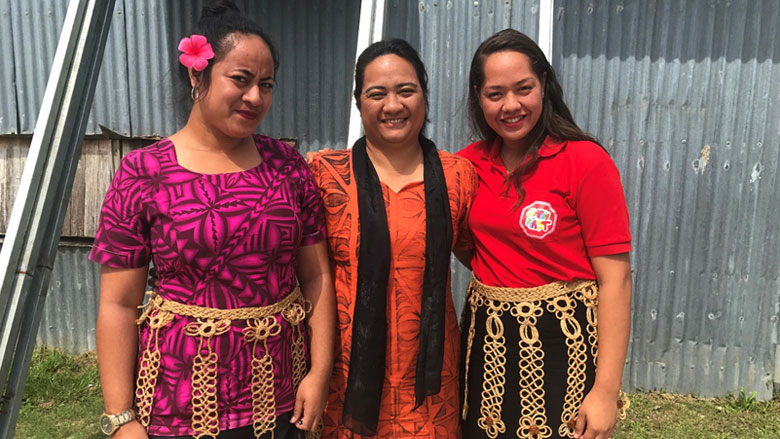 Tonga, May 9, 2018 - In the Kingdom of Tonga, three women, supported by the World Bank’s Transport Sector Consolidation Project, are working to make the country’s roads safer. Over two years of visiting students and running campaigns on road safety, the three women have contributed to reducing Tonga’s annual road death toll from an average of 20 per year to five from 2016 to 2017 – earning Hepisipa Oko, Ane Tauki’uvea and Maile Fotu the nickname the ‘Road Safety Sisters.’

Between 2012 and 2016, the two main causes of serious accidents and deaths were speeding and drink driving. The Road Safety Sisters believed that by focusing on increasing awareness of road rules and risks, they could contribute to changing dangerous behaviors across the country.

‘You Only Live Once’

Through the project and in collaboration with the Ministry of Infrastructure, the Police Department and the Ministry of Health, the Road Safety Sisters have travelled around the country to share facts and lessons on basic road rules and safety that can save – and is saving – Tongan lives.

Tonga’s Crown Prince Tupoutoa ‘Ulukalala was the guest of honor at the December 2016 launch of their first safety campaign, Koe mo’ui ‘oku taha pe (Tongan: ‘you only live once’), which was timed to start just before the holiday season when the majority of road accidents occur. The campaign has been strongly supported by media coverage across the country, particularly radio, which is the most effective way to communicate with Tonga’s distant outer islands.

The Road Safety Sisters visits to schools see them teaching kids simple safety tips such as using seatbelts, exiting cars on the pedestrian side, as well as safer cycling. Since 2016 the Sisters have visited around 100 schools across the country, reaching more than 10,000 students. These sessions have had a big impact, says one of the Sisters, Hepisipa Oko, who is a Road Engineering Officer for the Tongan Ministry of Infrastructure.

“We’ve had parents come back to us saying, my kids now tell me off if I speed or try to speak on the phone while driving,” said Oko.

"We have produced both ads and instructional videos, showing the risks of drink driving and speeding, but also videos that give useful tips on how we can all be safer road users"
Maile Fotu
Project Administrative Assistant

However, the Sisters are well aware that for their efforts to be immediately impactful, they need to reach the drivers of today, too. To do so they have distributed information handouts at government ministries and police stations across the country that show road signs and their meanings. They have held radio programs with the police and safety officers to answer common questions from the public, and have pushed messages heavily into the media and across Facebook, where videos have been very popular.

“One of the best ways to capture peoples’ attention was through videos,” said Sister team member, Maile Fotu, who works as an Administrative Assistant on the project.

“We have produced both ads and instructional videos, showing the risks of drink driving and speeding, but also videos that give useful tips on how we can all be safer road users,” said Maile. “The kids love watching the videos and we leave them with the schools to show them again later and keep the messages alive.”

The instructional videos included information on cycling, being a passenger, pedestrian, and a summary of some of the skills you need for your driving test.

The team also received additional support for their work through the Global Road Safety Facility which has helped to finance some of their much-needed communication materials.

Unfortunately, following Cyclone Gita in February 2018, many street lights remained broken in the weeks that followed, leading to a recent spike in accidents. But this challenge has only spurred them on.

“We’ve already started on our next plans, and [we will] start speaking directly to communities and church groups again soon,” said Hepisipa Oko.